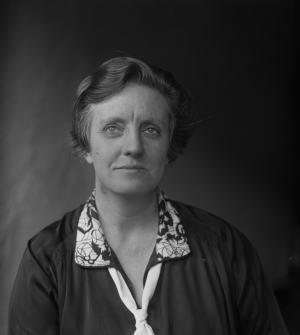 Elsie Robinson was a journalist, fiction writer and poet. She was best known for her nationally syndicated column, Listen, World! which was read by more than 20 million Americans between 1921-1956. Robinson used her voice to continuously examine and challenge the status quo, especially when it came to women’s perceived roles in society.

Born in 1883 in Benicia, California, Robinson was the third of five children in the household of Elizabeth and Alexander Robinson. Although her parents sent her two older siblings to college, the family fell on hard times when Robinson was in high school and were unable to fund her tuition. Instead, Robinson did what most young women were expected to do at the turn of the 20th century: she got engaged.

Christie B. Crowell, a wealthy widower 10 years Robinson’s senior, hailed from Brattleboro, Vermont.  The relationship was fraught from the beginning. Crowell’s conservative parents saw Robinson as a loud-mouthed interloper from California and pressured Robinson to attend an East Coast religious boarding school before they approved of the marriage, where, between 1901-1902, she begrudgingly learned the domestic skills she’d shunned as a girl. But the polish didn’t improve the couple’s relationship. Even the birth of their only child, George Alexander Crowell, in 1904, didn’t unite the couple.

Born with severe asthma, George was often bed-ridden and to entertain him, Robinson wrote and illustrated children’s stories that featured her beloved California. Stuck in her passionless marriage and consumed daily with worry about her ill son, Robinson found healing in her art. She wondered if her work was good enough to publish. In 1911, she sent a few of her stories to John Martin’s Letters, a subscription service that delivered stories to children by mail, which published them and boosted her self-confidence.

In 1912, following this early success and emboldened after being hired to illustrate two children’s books, Behind the Garden Wall and Within the Deep Dark Woods, Robinson made the gutsy decision to leave her husband and return to California with George. There, she illustrated two additional children’s books but couldn’t find enough editorial work to support herself. In 1915, she moved to the California foothills with George where Robinson was forced to work in a gold mine as a common mucker to make ends meet, the only woman on a motley crew of men.

Despite setbacks and hardships, Robinson continued to pursue her dream of becoming a writer. She borrowed a typewriter, taught herself to use it, and turned her experiences into short stories and essays which she published in literary and travel magazines, including Sunset, The Smart Set, and The Black Cat.

When the mine closed in 1918, Robinson moved to San Francisco with George. After another bout of hard times, she walked into the Oakland Tribune with a mock-up of a children’s section and was hired on the spot. Her column was so popular that the Tribune ultimately expanded into an eight-page section called “Aunt Elsie’s Magazine” which spawned dozens of “Aunt Elsie” clubs throughout Northern California. The Tribune hosted “Aunt Elsie” variety shows at local theaters, with as many as three thousand children attending and police on hand to handle the crowds.

In 1924, after having launched several successful columns for adult readers – “Curtains, Collars, and Cutlets: Cheer-Up Column,” “Cry on Geraldine's Shoulder,” and “Tell It to Elsie,” William Randolph Hearst hired her to syndicate "Listen, World!," a column she had started in 1921, making her the highest-paid newswoman in his organization. She used her national platform to spread her progressive views, speaking out against gender inequality, racism, and during WWII, in defense of Jews. She also demanded better pay and improved conditions in the workplace.

In 1934, Robinson published a memoir called I Wanted Out!, which was serialized in Cosmopolitan magazine, and a collection of poetry, also titled Listen World! Robinson drew the editorial cartoons that accompanied her columns -- one of few opinion writers to do so, even today.

Beyond her thirty-five-year run of “Listen, World!,” Robinson’s first columns would continue even longer, written by alternates. “Cry on Geraldine’s Shoulder” ran until 1961 and the last “Aunt Elsie” column published in 1970, both well after her death.

Throughout her career, she repeatedly examined the place of women in marriage, in the workplace, and in the world. Although she never called herself a feminist – a term that many Americans at that time equated with “man-hater”— Robinson was indeed a feminist in her thoughts, words, and actions and encouraged other women to live as largely as she did.

Dickson, Paul and Thomas B. Allen. “Marching on History: When a “Bonus Army” of World War I veterans converged on Washington, MacArthur, Eisenhower and Patton were there to meet them,” Smithsonian Magazine, February 2003.