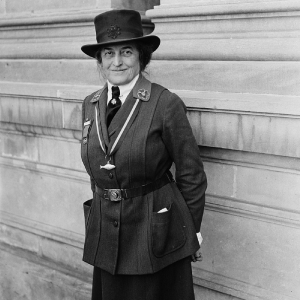 Known as the founder of the Girl Scouts, Juliette Gordon Low created the largest and most successful organization for girls in the world. She is best remembered for her sheer determination and tireless efforts to promote and sustain the organization through the early part of the twentieth century.

Juliette Magill Kinzie Gordon was born in Savannah, Georgia on October 31, 1860 to parents William Washington Gordon II and Eleanor “Nellie” Kinzie Gordon. She was known to her friends as “Daisy.” Gordon’s parents encouraged her and her five siblings to be loyal, dutiful, and respectful of others. Traits that would later become central to the Girl Scouts. Starting at the age of 12, Gordon was sent to a number of different boarding schools in the north and south to obtain a good education. She was particularly interested in music and art classes. Low liked to socialize with her classmates and attend balls. Despite having a good education, spelling and grammatical errors permeate her letters throughout her life. Some historians speculate that she may have had a learning disability such as dyslexia.

In 1886, Gordon married William Mackay Low, the brother of a friend from boarding school. Low’s husband, who was a native of Savannah, lived in England. After marrying, the couple moved to England and associated with aristocratic families of Britain. The marriage did not go smoothly. By 1905, the couple was in the processes of divorcing. However, Low’s husband suddenly died, and the divorce was never finalized.

In 1912, Low met Lord Robert Baden-Powell at a lunch in England. Baden-Powell had recently created the Boy Scouts and was interested in setting up a similar organization for girls. Low was enthused by the idea and worked with Baden-Powell to set up and run a troop of Girl Guides in Scotland and two troops in London. Upon her return to the United States in early 1912, Low was eager to begin the Girl Guides movement in America. She started by forming a troop of girls in her hometown of Savannah, Georgia. The first Girl Guides consisted of her relatives and girls from other established families in the town. In a ceremony on March 12, 1912, the girls were inducted into the Girl Guides. The group held meetings at Low’s carriage house.

Each troop was divided into smaller units of girls called “patrols”. Each patrol was named after a flower, and they met on different days of the week. The girls learned a wide variety of skills, including map reading, first aid, cooking, and knot tying. Low adopted the British Girl Guides’ system of awarding badges to girls who became proficient in skills.

In 1913, a year after the Girl Guides began in America, it underwent significant changes. Its membership expanded to other states, requiring the organization to create a National Headquarters in Washington, DC. (The headquarters were moved to New York City in 1916.) That year, the organization also changed its name to Girl Scouts and the first American Girl Scout handbook, How Girls Can Help Their Country, was published. Low had adapted the handbook from the British Girl Guides handbook, How Girls Can Help to Build Up the Empire, which was written by Agnes Baden-Powell, Baden-Powell’s sister.

Throughout the course of World War I, Low travelled between America and Britain, championing the Girl Scouts and Girl Guides, supporting Belgium refugees in the UK, and raising funds for British soldiers and their families. She also worked with the American Red Cross and other US organizations to involve Girl Scouts in the war effort. Girls rolled bandages, planted gardens, canned, and sold war bonds.

After the war ended in 1918, Low returned to England to continue her work with the Girl Guides and to revive their connection with the American Girl Scouts. Olave Baden-Powell spearheaded an International Council of Girl Guides and Girl Scouts in 1919. Low was in London at that time and acted as the American representative on the Council. Its aim was to expand the work of the girls’ organizations throughout the world. During the 1920s, this International Council of Girl Guides created troops in many parts of the globe, including South Africa, Australia, New Zealand, and China.

For her extensive and continued work for the Girl Guides, Low was awarded the organization’s Silver Fish by Olave Baden-Powell in 1919, its highest honor. Low is one of the few Americans to have received this award. The following year, Low stepped down as President of the Girl Scouts of America and focused more of her attention on promoting the organization internationally. The organization established Low’s birthday, October 31, as Girl Scouts’ Founder’s Day in 1920.

In the early 1920s, Low was diagnosed with breast cancer. She had several surgeries and treatments, including the ingestion of lead, to try and cure her disease. But her treatments did not work. Despite her poor and declining health, Low kept up a relentless schedule to promote and support the work of the Girl Scouts. On January 17, 1927, she succumbed to her illness and died. The next day at a candlelight service, hundreds of Girl Scouts attended her funeral.

Low has been awarded numerous posthumous awards. She has been inducted into the National Women’s Hall of Fame. In 2012, President Barack Obama awarded her the Presidential Medal of Freedom. Her birthplace has also been designated a National Historic Landmark.

Although she died ninety years ago, Low’s legacy lives on. Today, the Girl Scouts organization is thriving around the world. As of 2017, there are over three million members and over fifty million members since its founding in 1912. The organization is self-sufficient due to its many patrons and yearly cookie sales to raise funds.