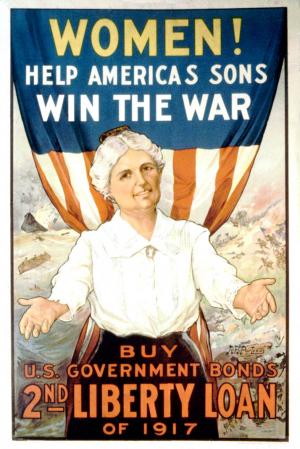 Randolph Bourne a progressive intellectual and political thinker, wrote that “war is the health of the state.” Although this may have been exaggerated rhetoric, it is undeniable that war efforts require and thrive on patriotism. Consequently, governments need to persuade their citizens to support their decisions through propaganda. This lesson examines how government posters portrayed women differently across three separate conflicts—Spanish-American War, World War I, and World War II. The lesson will further challenge students to think about how the US government’s public information campaigns might have affected American women’s social and economic choices.

Students need to possess an understanding of propaganda and how any government or group attempts to stir their citizens to action. In addition, a basic working knowledge of the three conflicts involved in the lesson—the Spanish-American War, World War I, and World II—will be critical. Students should know the wars causes, major players, and outcomes.

Teacher will need access to a projector and their images, copies of the Bourne reading (pg 9), Unpacking the Box Graphic Organizer (pg 10), and computers for additional research.

Open with a class discussion over Randolph Bourne’s famous line that “war is the health of the state.” Divide your students into pairs (Pair Share) to consider and answer the discussion questions.

After discussing the quote, read an excerpt from Bourne’s writing on war and its importance to the state (link below) and consider the questions below.

prop·a·gan·da: the spreading of ideas, information, or rumor for the purpose of supporting or damaging an institution, a cause, or a person

After covering the link between war and popular public opinion, examine the role of women in this process.

Set up six stations around the room with one political poster or cartoon at each station. For each illustration, provide only the title, any caption, and date. No more information will be given at the outset of the activity. There will be six total images with two from the Spanish-American War, two from World War I, and two from World War II. The illustrations are linked below.

Divide students into six groups. Each group will assign a note taker who is responsible for completing an Observe, Reflect, and Question graphic organizer. The graphic organizer is linked below.

Working together, each group will analyze the six images and provide the outlined feedback for each poster.

Allow 5-6 minutes per image and rotate until each group has interpreted each image.

Next, project each image, beginning with the Spanish-American War illustrations and continuing chronologically. Students can shout out, proceed group-by-group, or raise their hand to share their observations and reflections. Use the students’ questions and an exchange of ideas to examine the themes in depth.

In closing, answer the following questions:

First, as a class, consider the following question:

Women’s history scholar, Doris Weatherford stated that “War holds many ironies, and among them is its liberating effect on women.”

Working together, each group of three or four will search for World War II posters that depict women. World War II era posters they believe illustrate the diverse roles and opportunities provided women in World War II. After the students have had time to look through the political posters, discuss with the students how these posters can be compared with art.

After concluding the discussion, the students should set about selecting their posters, defining the purpose behind them, and analyzing their effect. The final outcome will be a technology-based presentation (on essentially any platform) and the requirements are enumerated below.

Return to Bourne’s analysis and close with the following questions.

Students, in groups or individually, will create a modern-day propaganda poster illustrating women. The purpose should be to think critically about women’s role in society and how a government, business, or other type of entity might use that to gain popular support for a war or other cause. Students can personalize their cause, if they have a solid plan.  Otherwise, they should focus on modern women and the propaganda that might be used to push war aims on the country.

Before they begin, consider the following discussion questions.

Teachers can allow students to use any or all of the following formats: