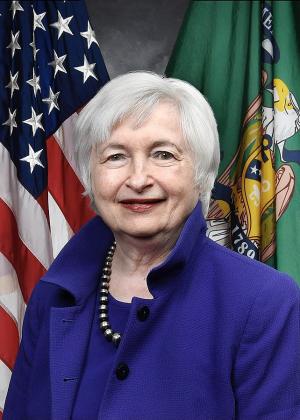 Dr. Janet Yellen, confirmed in January 2021 as the first female Treasury Secretary of the United States, is no stranger to breaking glass ceilings. An economist with a lifelong commitment to making the American economy one that allows all workers to succeed, she was also the first woman to lead the Federal Reserve and the first person in history to be in charge of the Treasury Department, the Federal Reserve and the White House Council of Economic Advisors. No wonder she had a rap song written about her in the mode of those written for the musical Hamilton!

Janet Louise Yellen was born on August 13, 1946, in Brooklyn, New York. She was the younger child of her father, Julius Yellen, who was a family doctor, and her mother Anna Ruth, who was an elementary school teacher. Most elite magnet public high schools were not open to girls when Yellen was growing up, but Yellen excelled at her local Fort Hamilton High School, where she was the editor of the school paper and valedictorian. Yellen has discussed how growing up in a working-class neighborhood and seeing people who could barely afford to pay her father when they were out of work deeply influenced her, showing the “effect unemployment could have… on human terms.” This is a lesson she has carried with her for her entire career.

Yellen attended Brown University, deepening her interest in economics and graduating with a B.A. in 1967. She then continued her studies at Yale University, earning her Ph.D. in 1971, the only woman among 24 Ph.D. graduates in Economics. Yellen taught economics as an Assistant Professor at Harvard University for five years, where she was well-regarded but not offered tenure. During her time at Yale and Harvard, Yellen began exploring more deeply how American companies should and could pay workers fairly.

In 1977, Yellen moved to a job at the Federal Reserve (often called the Fed)—the central bank of the United States—where she worked as a researcher. That was where she met her husband, fellow economist George Akerlof. Yellen and Akerlof, married since 1978, have long collaborated on economic research studies, and consider each other colleagues as well as life partners. Yellen has said Akerlof is “very committed to being a completely full partner in our marriage” who has contributed equally to raising their now adult son.

After spending two years as a lecturer at the London School of Economics, where Akerlof had accepted a job as a professor before their marriage, Yellen and Akerlof relocated to San Francisco in 1980 to join the faculty at University of California at Berkeley. At the Business School, Yellen was a popular teacher, winning awards and praise from students. She taught there until 1994, researching and publishing papers on policies that she believed would make Americans’ lives better: keeping unemployment low, making sure workers are paid based on quality of work no matter their gender or race, and valuing people’s work based on more than just supply and demand. These policy ideas can be seen clearly in one of her early and most cited papers, written with Akerlof, which explained why paying higher wages was often beneficial to employers as well as employees and did not lead to higher unemployment.

In 1994, Yellen was nominated by President Bill Clinton to be a member of the Federal Reserve, serving under Chairman Alan Greenspan. Greenspan was known as a conservative free market purist, and Yellen often had a different viewpoint, which she would lay out with clear-eyed reasoning. In 1996, Yellen convinced Greenspan that zero inflation should not be a goal; instead, based on academic research, she argued that a little inflation was actually healthy and would prevent recessions. The Fed now maintains a 2% inflation target.

In 1997, Yellen left the Fed to head the White House Council of Economic Advisors (CEA), serving as the primary economic advisor to President Clinton. At the CEA, Yellen oversaw a study on the gender pay gap, which concluded that the disparity was not explained by productivity and must be due to discrimination in the workforce.

In 1999, Yellen returned to UC Berkeley, teaching there until 2004, when she was tapped to lead the Federal Reserve Bank of San Francisco. During her six-year term as its president, Yellen was credited as one of the first economic policymakers to observe rapidly rising housing prices as a possible bubble which might harm the economy. By September 2007, Yellen urged policymakers to act preemptively and in 2008 was the first Fed official to say the economy was in recession. Yellen was part of the team that managed the 2008 recession, maintaining her focus on helping workers.

In 2010, President Barack Obama nominated Yellen to be Vice-Chair of the Federal Reserve, where she advocated that the Fed use “all available tools” to bring down unemployment.  This was a somewhat controversial opinion, but Yellen was confident that research proved it was the correct path. In 2013, Yellen was appointed to succeed Benjamin Bernanke as Chair of the Federal Reserve—the first woman to hold this job. She oversaw the task of gradually “unwinding” (slowly ending) the government’s propping up of the economy, and remained in the position until early 2018.

Yellen’s time as Fed Chair was very successful if judged by the labor market, her primary focus as an academic and policymaker. During her tenure, the unemployment rate dropped from 6.7% to 4.1%, decreasing every month under her leadership. She was also steadfast in her defense of the Dodd Frank Financial Reform and Consumer Protection Act (2010), which regulated various parts of the financial industry more rigorously than many economists deemed necessary. Yellen believed that oversight had in fact made the banking system stronger.

After leaving the Fed in early 2018, Yellen moved to The Brookings Institution, a think tank in Washington DC. President-elect Joe Biden announced his intention to name Yellen as Treasury Secretary in late November 2020, and she was confirmed by the Senate in January 2021.

As Treasury Secretary, Yellen will no doubt continue to focus on the same issue that has motivated her for decades: employment. As President Biden said, “she understands what it means to people and their communities when they have good, decent jobs.”

Image Credit: By US Department of the Treasury - https://home.treasury.gov/system/files/136/Sec_Yellen_Portrait.jpg, Public Domain, https://commons.wikimedia.org/w/index.php?curid=103212685

George A. Akerlof and Janet L. Yellen, "The Fair Wage-Effort Hypothesis and Unemployment," The Quarterly Journal of Economics (May 1990).   https://academic.oup.com/qje/article-abstract/100/Supplement/823/1918372?redirectedFrom=fulltext