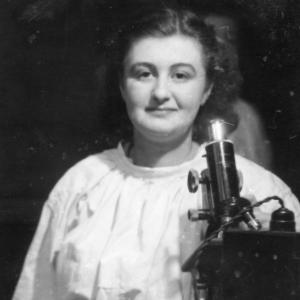 June Almeida serves as a role model for determination and innovation. As the person to identify the first human coronavirus, scientists, and people all over the world, are indebted to her work.

June Dalziel Hart was born on October 5, 1930 in Glasglow, Scotland. Her father, Henry Leonard Hart, drove a bus and her mother, Jane (Steven) Danziel worked at a local shop. Growing up in a tenement in Alexandra Park in northeast Glasglow, Almeida excelled in school, but money was always tight. In 1947, she won the top science prize at her school and wanted to continue pursuing a career in science after her high school graduation. However, there was no money to pay for her college tuition, so Almeida took a job to help her parents pay the bills. She started at age 16 as a lab technician in histopathology (studying and diagnosing tissue disease) at the Glasglow Royal Infirmary. Shortly thereafter, the family moved to London and Almeida took up the same job at St. Batholomew’s Hospital in the city. She worked diligently at her job, but—without a college degree—it was hard to advance.

In 1954, Almeida married Enriques (or Henry) Rosalio Almeida, a Venezuelan artist; the marriage ended in divorce. The two had one daughter, Joyce, and moved to Canada. While in Canada, Almeida found more opportunities than in London for someone without a college degree, and it was in Canada where her career took off. She took a job as an electron microscopy technician—meaning she used a powerful electron microscope to take photos of specimens for research and diagnosis—at the Ontario Cancer Institute (now the Princess Margaret Cancer Centre) in Toronto. As she made images with her microscope, she acquired the reputation for being an expert in the process. In the 1960s, detecting viruses was painstaking and slow work. Examining a single cell could take hours, and images were grainy and hard to see. Despite this context, Almeida was able to make these images clearly and quickly. She perfected a technique called negative staining, which helped her find and identify viruses.

After working for years in Canada, Professor A.P. Waterson, a virologist, persuaded Almeida to go back to London in 1964. She started at St. Thomas’ Hospital and then moved with Professor Waterson to the Royal Post Graduate Medical School in 1967. It was during this time that her career began to blossom; she co-authored many scientific publications and continued identifying and imaging many viruses. In her career, she became the first to visualize the rubella virus and she provided invaluable research on HIV and Hepatitis B, of which she helped identify the structure. She also perfected a technique called immune electron microscopy (a process that makes identifying viruses easier) and taught many other virologists her techniques.

It was while she was working in London that she came to the attention of Dr. David Tyrell. Dr. Tyrell was a researcher working on the common cold, but he had one sample (B814) that he could not identify. Hearing of Almeida’s expertise, he sent her the sample to identify. Using her negative-staining technique, she created a sharp, clear picture of the mysterious virus. Not only was she able to clearly see it, but the virus looked familiar to one she had seen years before. But scientists had rejected her earlier identification, saying that what Almeida identified as a different virus was in fact a blurry image of a flu virus.

But Almeida was proved right in the end—that “blurry photo” and Tyrell’s B814 virus were the first identified human coronaviruses. She and others called it a “coronavirus” because each piece of virus looked like a crown, which in Latin is corona.

Almeida continued to write scientific papers and conduct research on viruses. Due to her contributions, the University of London awarded her a master’s degree in 1970 and a Doctor of Science in 1971—she finally had the college degrees she had wanted since high school. Most virology review articles and textbooks contain images of viruses she produced.

Almeida finished her career at the Wellcome Research Laboratories in London where she worked on vaccines and diagnostics. In 1985, she retired and moved to Bexhill (a town in southeast England) with her second husband, Philip Gardner, who was also a virologist. In retirement, Almeida taught yoga, traded antiques, and restored China with Gardner until his death in 1994. Almeida could not stay away from her microscope for long though, and in the late 1980s she returned to St. Thomas’ as an advisor and applied her expertise to produce some of the first high-quality photos of HIV.

June Almeida died on December 1, 2007, in Bexhill at the age of 77. When a new, unidentified virus first appeared in China in 2019, researchers used Almeida’s pioneering work and techniques to identify it as another coronavirus. While her discovery may have been overlooked during her lifetime, the Covid-19 pandemic has brought the world’s attention to Almeida’s important work. Without it, things may still be blurry today.

“Meet June Almeida, the Scottish virologist who first identified the coronavirus,” The World, May 7, 2020, https://www.pri.org/stories/2020-05-07/meet-june-almeida-scottish-virologist-who-first-identified-coronavirus