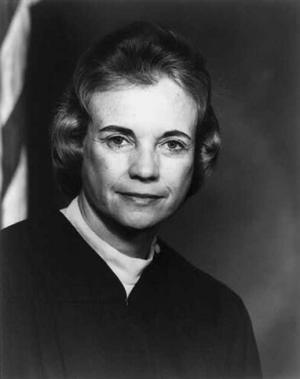 Sandra Day O’Connor, the first female Supreme Court Justice of the United States, was one of the most influential Americans of the 1980s and 1990s. She dealt with indignities ranging from having to accept a job for no pay after she graduated from law school to the lack of a women’s restroom at the Supreme Court when she was first confirmed – in doing so, paving the way for the women who followed.

Sandra Day was born on March 26, 1930, in El Paso, Texas to her rancher father, Harry, and mother, Ada Mae. In her early childhood, she lived with her parents on a remote cattle ranch, Lazy B, near Duncan, Arizona (25 miles away from town down a dirt road); her sister and brother were not born until O’Connor was eight and ten years old. The ranch had no running water or electricity until O’Connor was seven years old and finances were tight, but Harry and Ada Mae subscribed to the Wall Street Journal, New Yorker, and other periodicals which mother and daughter read together. O’Connor was sent to live with her grandmother at age 6 to attend school in El Paso as there were no good schools nearby. Returning to the ranch during summers, she learned from her father at a young age to drive, mend fences, shoot a rifle and ride with the cowboys.

Although O’Connor was in the top 10% of her graduating law school class, she was told point blank that law firms did not hire women. In a 2013 interview, O’Connor remembered, “I called at least 40 of those firms asking for an interview, and not one of them would give me an interview…they said, 'We don't hire women,' and that was a shock to me.”

Eventually she got a job at San Mateo County as a deputy attorney by agreeing to work for free. After her husband graduated and was drafted, O’Connor moved with him to Germany, where she worked as a civilian attorney for three years. The couple then returned to Maricopa County, Arizona, where they settled to raise their family. Their three sons were born in 1958, 1960 and 1962.

While her sons were young, O’Connor took a five-year hiatus from practicing law and became active in political volunteering with the Republican Party, including with conservative Senator Barry Goldwater’s presidential campaign in 1964. She returned to paid legal work in 1965, serving as Assistant Attorney General for the state of Arizona. In 1969, she was appointed to the state senate; she won re-election in 1970 and 1972, then made history in 1973 when she was elected State majority leader becoming the first woman in the country, from either political party, to reach this position. O’Connor earned a reputation as a savvy negotiator who was fiscally conservative but more moderate on social issues like abortion, in keeping with the majority of the Republican party in Arizona at the time. She was also known as a hardworking lawmaker with exacting standards, often rewriting her colleagues’ legislation if she felt it necessary.

O’Connor resigned her Senate seat in 1976 for a judgeship in Maricopa County Superior Court, where she continued to build her reputation as a tough judge with respect for lawyers who were well-prepared and little patience for those who were not. She rebuffed calls from state Republican leaders to run for governor, but willingly accepted the call from President Ronald Reagan in 1981 to be his nominee to the Supreme Court. She was confirmed unanimously and joined the Court in September of that year.

O’Connor has mentioned that she felt a great sense of responsibility to be an excellent justice so that there would be no question that women were fully capable, and she was relieved when Ruth Bader Ginsberg joined her on the Court in 1993. Known as a hard worker during her tenure on the Court, O’Connor reviewed each of her clerk applicants’ case work herself, and while other Justices chose clerks at least partially along party lines, she was known to choose the smartest, regardless of ideology.

While she became known as a crucial swing vote on the Supreme Court, in her early years O’Connor sided mainly with the conservative justices, led by her law school friend Rehnquist. As the Court became more conservative (specifically, Clarence Thomas replacing Thurgood Marshall), O’Connor became a more decisive centrist vote in 5-4 decisions, siding with conservatives in cases such as Bush vs. Gore, deeming “Gun Free School Zones” unconstitutional and allowing school vouchers to be used at religious schools, but with liberals in upholding campaign finance laws, affirmative action, and abortion rights.

After serving 24 years on the Supreme Court, O’Connor retired in 2006 to care for her husband, who was suffering from Alzheimer’s. She has remained active, hearing cases in district courts as a visiting judge, giving speeches and engaging in philanthropic and policy work.

O’Connor’s service as the first woman Supreme Court justice proved beyond doubt that the Court, and the country, are well-served by having women justices. A belief now shared regardless of political party or ideology.

“About the Supreme Court: Justices.” https://www.supremecourt.gov/about/biographies.aspx#SOConnor

Out of Order: Stories from the History of the Supreme Court, by Sandra Day O’Connor. Random House, 2014.

Lazy B: Growing Up on a Cattle Ranch in the American Southwest, by Sandra Day O’Connor and Alan Day. Random House, 2002.