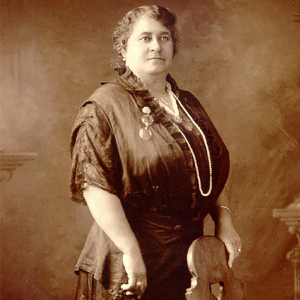 At the turn of the century, Maggie Lena Walker was one of the foremost female business leaders in the United States. She gained national prominence when she became the first woman to own a bank in the United States. Walker’s entrepreneurial skills transformed black business practices while also inspiring other women to enter the field.

Walker was born to enslaved parents on July 15, 1864 in Richmond, Virginia. After the Civil War, her mother worked as a laundress and her father as a butler in a popular Richmond hotel. Walker’s father was killed and she had to help her mother financially by working. Although his death was ruled a suicide, Walker later revealed that she believed he had been murdered. She attended a local school in Richmond and upon graduation, began teaching. She stepped down from teaching after she married a successful brick maker.

Walker had always focused her efforts on accounting and math. Her first business endeavor was a community insurance company for women. From there she continued her entrepreneurial pursuits. In 1903, she founded the St. Luke Penny Savings Bank. Walker was the first woman of any race to charter a bank in the United States. The bank was a powerful representation of black self-help in the segregated South. The Penny Savings Bank not only attracted adults but Walker worked to appeal to children by passing out banks which encouraged them to save their money.

In 1915, Walker’s husband was killed by her son, after he mistook him for a burglar. Her husband’s passing left her in charge of a large estate. She continued working for the Order of St. Luke's but also held leadership positions in other civic organizations, including National Association of Colored Women (NACW). She also served as the Vice President of the Richmond chapter of the National Association for the Advancement of Colored People (NAACP).

By 1924, the Penny Savings Bank had spread to other parts of Virginia and included more than 50,000 members. While other banks collapsed during the Great Depression St. Luke’s Penny Saving survived. The bank eventually consolidated with two other large bank and moved to downtown Richmond. It is still in operation today.

After an illness in 1928, Walker was forced to use a wheelchair. Although limited in movement, Walker remained a leader in the Richmond African American community. She fought arduously for women’s rights as well. For much of her life Walker served as board member of the Virginia Industrial School for Girls.

On December 15, 1934, Walker died from complications due to diabetes. Walker’s house in Richmond has since been designated a National Historic Site by the National Park Service.