The Embodiment of the American Woman’s Economic and Social Awakening 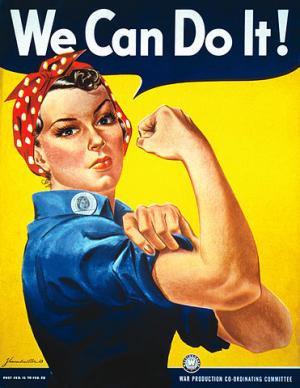 American history is the story of expanding roles for oppressed groups where individuals defied expectations, broke down barriers, and created the momentum necessary for change. Few groups embodied this process better than American women. From Abigail Adams’ admonition to her husband to “remember the ladies” to modern-day Woman’s Marches, American women’s story is one of hope meeting resistance. Over time, however, progressive action gradually triumphs over reactionary inaction. This lesson covers the efforts by American women on the Home Front during World War II. Their willingness to embrace all hardship to promote the war effort was embodied by J. Howard Miller’s “I Can Do It” poster featuring the character that became known to history as Rosie the Riveter. Rosie’s iconic image reminds Americans of women’s social and economic awakening amid the worst conflict in human history.

Students should have a solid overview of women’s history and resistance to overt patriarchy in the United States, especially the Seneca Falls Convention, subsequent woman’s suffrage movement, and the Nineteenth Amendment’s passage. In addition, students need to understand World War II’s outbreak and its effect on the US economy.

Teacher will need access to a projector and their two images (Liberty Bond and “We Can Do It” posters), copies of readings and documents (electronic delivery if possible), and computers for additional research.

Homework Before the Lesson:

Split your class into thirds and give each group one of the three articles below. Each student will read the article and answer the questions provided before the next class. If it is not possible to share the readings electronically; ensure that each student has a copy of their assigned article and the discussion questions.

Working in the Defense Industry During World War II

On the Home Front During World War II

On the Farm During World War II

Discuss with your students the symbolism in posters and other political propaganda that they may need in order to fully grasp the posters in the opening activity.

For most of American history, classical symbolism maintained a powerful sway in the public imagination. The Founding Fathers’ classical ideal was tied up with their understanding of republicanism, one of the guiding ideologies of the American Revolution, which emphasized the dual loyalties to family and the nation. In order for the nation to be strong, however, it needed good and virtuous citizens. Early Americans believed that the only way to have a strong family was through a loving and virtuous mother.  Under this classical ideal, women were celebrated for their fertility and innocence. In order to maintain Americans’ liberty, women were vital because they were the innocent mothers who possessed the task of raising virtuous citizens. The link below provides several classical-themed political posters, which demonstrate that the virtuous woman often embodied morality, justice, determination, and duty. In addition, the posters induced both an emotional response and a patriotic call to action. All of these factors proved effective in recruiting men and women to the war effort. Americans understanding of classicism is a major reason why many men (and women) argued that women should not vote or become politicians. These people believed that women would neglect their primary duties as mothers and ruin the nation’s future. Until roughly World War I, women were portrayed in this classical light that required men to protect their beauty and feminine qualities against invaders. After the suffragist movement and female employment gains, their image in the political discussion changed. Women were increasingly portrayed without complete dependence on their role as mothers. In many ways, World War II helped eliminate the classical image in American political discussion. Women were needed in the workplace and, consequently, national recruitment posters changed to meet this new need. As you look at the posters, look for the differences in how the women are dressed, how they carry themselves, and what the text states about their actions as citizens.

Begin the lesson with a class discussion using the questions below in order to introduce the economic conditions of the country going into the war and the effect of the war on the economy. For this exercise, divide your students into pairs (Pair Share) to consider and answer the discussion questions.

After discussing war and its economic effect, project the picture of Rosie the Riveter (J. Howard Miller’s famous poster) and ask the following questions:

Next, project and compare another image of women from World War I. The image is entitled “Fight or Buy Liberty Bonds” and evokes the “classical” ideal of women to convey a message/idea. Ask the students to discuss the following questions:

The students will work cooperatively to complete a Jig Saw. Before beginning the activity, ensure that each student has completed the readings and questions assigned as homework.

Divide the class into working groups of three to four students. In this activity, students will rotate from table to table, talk about the articles they were given, and discuss the questions assigned to each article.

Allow 10 minutes for each group to review and discuss the assigned questions. At the end of 10 minutes, two members of each group will remain at their designated table while the other group members will move one-at-a-time to meet with the other groups. Allow 5 minutes for each table discussion session. Rotate every five minutes until every student has heard the content and discussed the questions for each of the three articles.

Bring the students together for a whole group discussion.

As a class, students will read three wartime accounts from real-life Rosie the Riveters as provided by Reader’s Digest. These accounts provide a diverse set of reasons, assumptions, and experiences from real women in the 1940s.

As a closing assignment, every student will attempt to put themselves into the shoes of women that worked to propel the American war effort.

For an extension activity, the teacher could assign the students to research the life of one real life “Rosie the Riveter.”

Specifications: Teachers can use these or adopt any additional requirements:

Students can focus on one or more of these questions and do not need to answer all questions. However, the response should be detailed and provide evidence of contextual understanding of the period.