On the Home Front

December 7, 1941, “a date which will live in infamy,” signaled the United States entrance into World War II. The country needed to adapt in order to support the war effort. Food and clothing were rationed. People planted Victory Gardens to grow their own produce and stretch rations. Towns held scrap drives to collect household goods made of rubber and aluminum to provide materials for the defense industry. Many people also contributed financially by purchasing war bonds from the government. 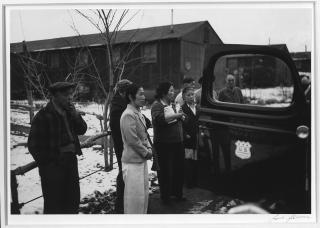 While America went to war to defend democracy and freedom, these ideals were not fully realized at home as racism and discrimination persisted towards immigrants and non-white Americans. Citing defense concerns on the West Coast in 1942, President Roosevelt issued Executive Order 9066. This order removed over 100,000 Japanese and Japanese Americans from the Pacific Coast and placed them in internment camps for much of the war. Many parts of the United States were still heavily segregated and discriminatory towards African Americans. Often, they received less pay or were barred outright from working in various companies. Many African Americans participated in the “Double V Campaign,” which sought to win the war and gain equality for all people. 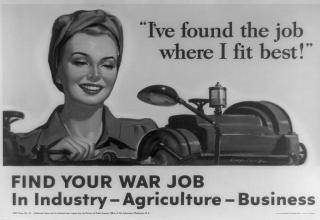 America’s involvement in World War II signaled changes on the home front and shifts in men’s and women’s roles. Many men were enlisted in the armed services, leaving a large number of jobs vacant. Wartime production demands for more planes, guns, and other military goods required an increase in the labor force. The US government called on women to fill these labor needs. Women were employment in a variety of jobs, which had previously been carried out by men. They joined the military, worked in defense plants, drove streetcars, worked on farms, and performed other roles on the home front.

The enlistment of men into the military included players from major league baseball. President of the Wrigley’s chew gum company and owner of the Chicago Cubs ball club, Philip K. Wrigley, decided to form a girls’ baseball league to take the place of the men’s league. The All-American Girls Professional Baseball League was formed in 1943 and lasted until 1954. The organization provided over 500 women the opportunity to play national baseball. The 1992 film starting Gena Davis, A League of Their Own, portrayed a fictionalized version of these women’s stories. 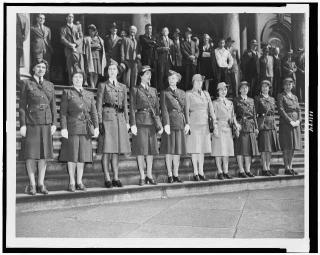 During the war, women joined volunteer organizations to support the needs of the home front and the troops. Groups that volunteered their efforts in the war included: The United Services Organization (USO), the American Red Cross, the American Women’s Voluntary Service (AWVS), and the United States Citizens Defense Corps. The AWVS, founded on the British model of the Women’s Voluntary Service, was formed in January 1940. Its volunteers, which numbered approximately 325,000 women, engaged in a range of activities including: working in canteens, selling war bonds, taking photographs, and driving ambulances. The AWVS was an interracial organization which included African American women and other minority groups.

The United Services Organization (USO) was founded in 1941. It was created as a non-profit organization to support the needs of troops stationed throughout the world. During the war, it provided rest centers for soldiers where they could get a hot meal and socialize with others. The USO also organized special performances such as musical concerts and comedy skits with Hollywood celebrities to entertain soldiers. 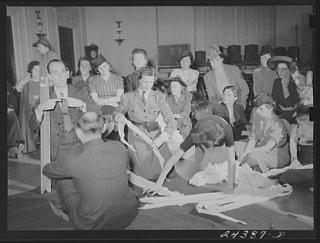 Created in 1881 by Clara Barton, the American Red Cross was an organization that was already well established before the war began. During WWII, the American Red Cross carried out a number of vital activities, including the collection of blood for the medical needs of the military and the home front. The Red Cross organized eleven volunteer corps which carried out a number of different activities in wartime. The corps included the Arts and Skills Corps, the Canteen Corps, the Motor Corps, Volunteer Nurse’s Aide Crops, Prisoner of War Relief Corps, and the Victory Book Campaign. 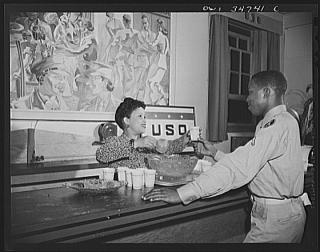 The Office of Civilian Defense (OCD) was created in May 1941 by the federal government. It organized the United States Citizens Defense Corps which oversaw and trained volunteers to help with civil defense on the home front. Members served in a number of different roles, including: air raid wardens, fire watchers, nurses’ aides, and rescue operations. They helped civilians with emergency food and housing.

Brownie Wise was a self-made woman who revolutionized marketing tactics and had a knack for motivating others. She introduced the now popular household item, Tupperware, to the market.
READ MORE
Article

From 2022 through 2025, the Mint will design and issue five quarters annually that feature reverse designs honoring a diverse group of women whose achievements, triumphs, and legacies reflect the strength and resilience of our nation.
READ MORE
.