Working in the Defense Industry

America’s entry into World War II brought with it a boom in the defense industry. The nation needed to produce the planes, tanks, trucks, guns, and ammunition it needed to fight the Axis powers. The nation also put its financial and intellectual resources into creating atomic weapons. In order to coordinate the government agencies associated with building goods for the military, President Franklin Delano Roosevelt created the War Production Board in 1942 and the Office of War Mobilization in 1943. Both organizations oversaw the production activities of the private manufacturing industry. They also provided federal financial assistance to these factories to purchase additional machines for production, build new facilities, and expand old manufacturing ones.

Companies already engaged in the defense industry expanded their activities and workforce in wartime. Other companies, such as car manufacturers, converted their production lines to manufacture goods for the military. Automakers, such as Ford and General Motors, shifted their output from cars to planes, trucks, and tanks. Throughout the war, the defense industry achieved incredible levels of output including: 2,000,000 trucks, 86,000 tanks and 297,000 aircraft.

Many workers were needed in the defense industry to reach the required output levels. Large numbers of people moved across the country to take up war work. There was a noticeable shift in population as people migrated from rural to urban settings and from the south to the north to take up employment in the defense industry. A large portion of the population had experienced unemployment during the Great Depression. The increase in manufacturing jobs during the war helped greatly reduce the unemployment rate.

Millions of women were involved in the wartime work force, many of them in the defense industry. There were a variety of female war workers who gained employment in manufacturing during the war. A large number of women shifted from their pre-war employment positions, moving from secretarial or service related jobs to the production line. Other women entered the workforce for the first time.

Women’s motives for taking on such work were varied. Some joined defense plants to patriotically support the country in wartime. Others joined because they had husbands, brothers, or other family members in the military and wished to help support the troops through their employment. Many took jobs in manufacturing because they needed the money. Often these jobs offered women higher wages, then they could obtain in other forms of work such as domestic service or secretarial positions. 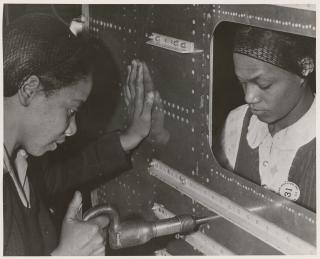 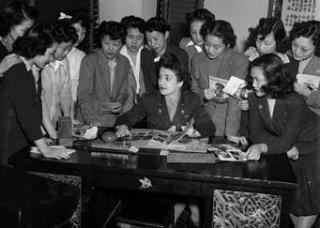 Chinese American women also found a place in the defense industry. They often faced discrimination in the job market prior to World War II. Regardless of their educational level, many Chinese American and Chinese women were unable to find work outside of their local Chinatowns. However, due to labor shortages during the war, many defense plants welcomed these women into their ranks.

Companies’ views about hiring women were not all the same. Some companies were eager to employ women to replace men, who had joined the military. Other companies, such as Ford, hired women not out of interest, but out of necessity to complete the work. Society held a mixed impression of women in war work, particularly housewives. Female workers were often viewed with suspicion and urged to maintain their domestic and child care responsibilities above all others.

When the war ended, the employment situation again shifted for women. Some women left employment to reestablish their homes for husbands returning from war. But many women were not given a choice about their employment and were laid-off from their jobs. These women either returned home or sought jobs in other sectors of the economy. Despite the employment of multiple ethnicities in the defense industry during the war, racism and discrimination continued after the conflict concluded.