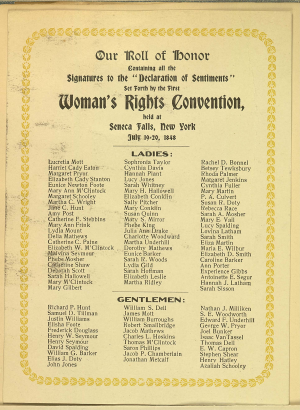 Nineteenth-century US law and custom erected barriers to women’s full participation in the economy by restricting their access to education, employment, and the civil court system. The Declaration of Sentiments was not only a seminal document calling for women’s voting rights, it also demanded women’s property rights.

This lesson examines the 19th-century women’s rights movement through the demand for women’s economic equality in addition to voting rights. Reading the primary source document The Declaration of Sentiments, will help students to understand its role in demanding women’s property.

20 minutes. The time does not include the required pre-reading homework.

Students will examine the 19th-century women’s rights movement through The Declaration of Sentiments and its demand for women’s economic equality.

Read prior to class

The Declaration of Sentiments

Step 1: Study Declaration of Sentiments from the perspective of its demands for women’s economic equality.

Divide the class into pairs and ensure that each pair has a printed copy and a highlighter. Read the Declaration and highlight passages that discuss women’s economic rights and associated civil rights.

Resolved, That all laws which prevent woman from occupying such a station in society as her conscience shall dictate, or which place her in a position inferior to that of man, are contrary to the great precept of nature, and therefore of no force or authority.

Resolved, That woman is man's equal—was intended to be so by the Creator, and the highest good of the race demands that she should be recognized as such.

Resolved, That woman has too long rested satisfied in the circumscribed limits which corrupt customs and a perverted application of the Scriptures have marked out for her, and that it is time she should move in the enlarged sphere which her great Creator has assigned her.

He has made her, if married, in the eye of the law, civilly dead.

He has taken from her all right in property, even to the wages she earns.

He has so framed the laws of divorce, as to what shall be the proper causes of divorce; in case of separation, to whom the guardianship of the children shall be given; as to be wholly regardless of the happiness of women—the law, in all cases, going upon the false supposition of the supremacy of man, and giving all power into his hands.

After depriving her of all rights as a married woman, if single and the owner of property, he has taxed her to support a government which recognizes her only when her property can be made profitable to it.

He has monopolized nearly all the profitable employments, and from those she is permitted to follow, she receives but a scanty remuneration.

He closes against her all the avenues to wealth and distinction, which he considers most honorable to himself. As a teacher of theology, medicine, or law, she is not known.

He has denied her the facilities for obtaining a thorough education—all colleges being closed against her.

Step 2: Facilitate a discussion with the students about the document and its demand for equal property rights. Remind students that they have read the Coverture article.

Step 3: Pass out the New York Married Women’s Property Act of 1848. Discuss how this law sought to alleviate the problems identified in The Declaration of Sentiments.

Read the following scholarly articles. Write an essay that explains the relationship between property rights and economic independence.

CCSS.ELA-Literacy.RH.9-10.1
Cite specific textual evidence to support analysis of primary and secondary sources, attending to such features as the date and origin of the information.

CCSS.ELA-Literacy.RH.9-10.2
Determine the central ideas or information of a primary or secondary source; provide an accurate summary of how key events or ideas develop over the course of the text.

CCSS.ELA-Literacy.RH.9-10.4
Determine the meaning of words and phrases as they are used in a text, including vocabulary describing political, social, or economic aspects of history/social science.

CCSS.ELA-Literacy.RH.9-10.5
Analyze how a text uses structure to emphasize key points or advance an explanation or analysis.

After identifying the parts of the Declaration of Sentiments and their function, students should be able to ascertain the central idea. Ask them to quote that idea and put it in their own words.

CCSS.ELA-Literacy.RH.11-12.1
Cite specific textual evidence to support analysis of primary and secondary sources, connecting insights gained from specific details to an understanding of the text as a whole.

CCSS.ELA-Literacy.RH.11-12.2
Determine the central ideas or information of a primary or secondary source; provide an accurate summary that makes clear the relationships among the key details and ideas.

CCSS.ELA-Literacy.RH.11-12.5
Analyze in detail how a complex primary source is structured, including how key sentences, paragraphs, and larger portions of the text contribute to the whole.