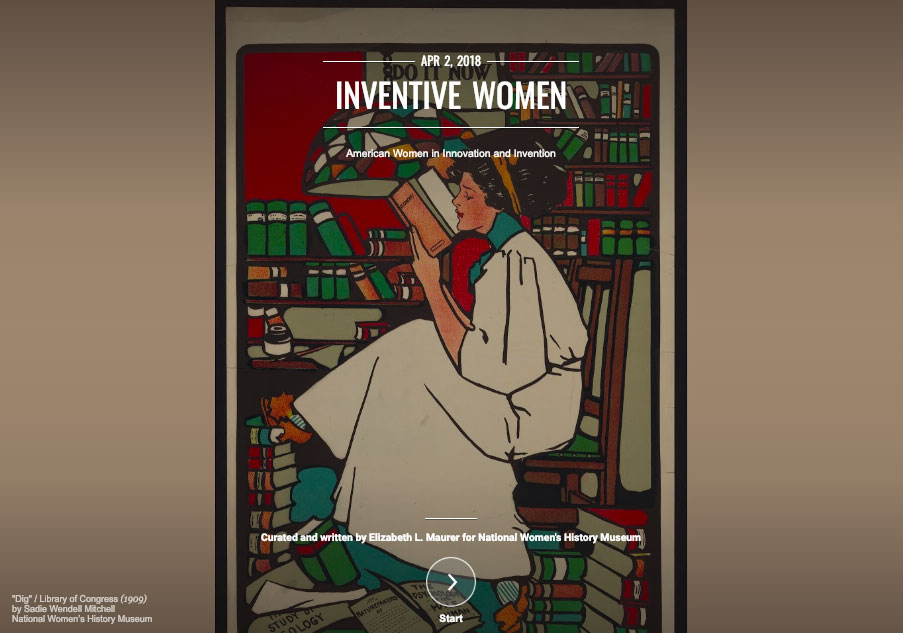 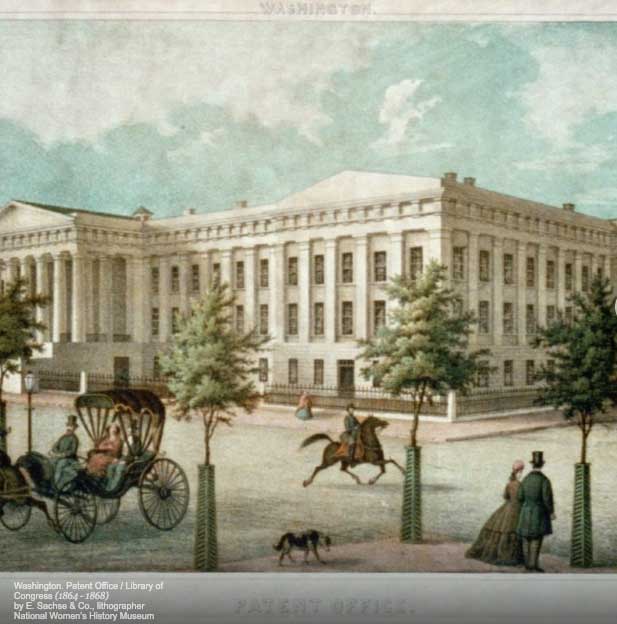 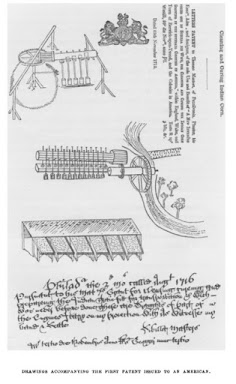 Sybilla Masters was the first American, male or female, to receive a patent. She invented a new method of milling corn through pounding rather than grinding dried kernels into flour. Under British law, married women could not receive a patent in their own names. Therefore the letters patent granted November 25, 1715 were "to Thomas Masters . . . of the sole Use and Benefit of A New Invention found out by Sybilla, his wife." 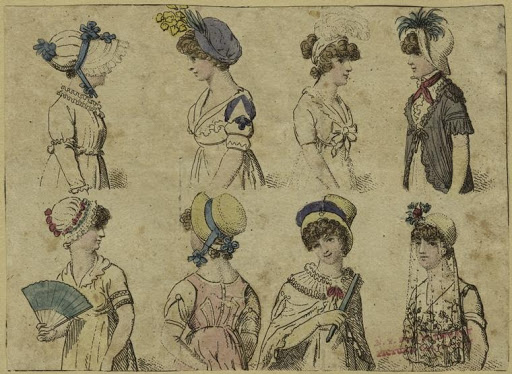 Mary Kies was the first American woman to receive a patent from the new United States government. Her invention was for a machine that wove straw and silk for fashionable hats. 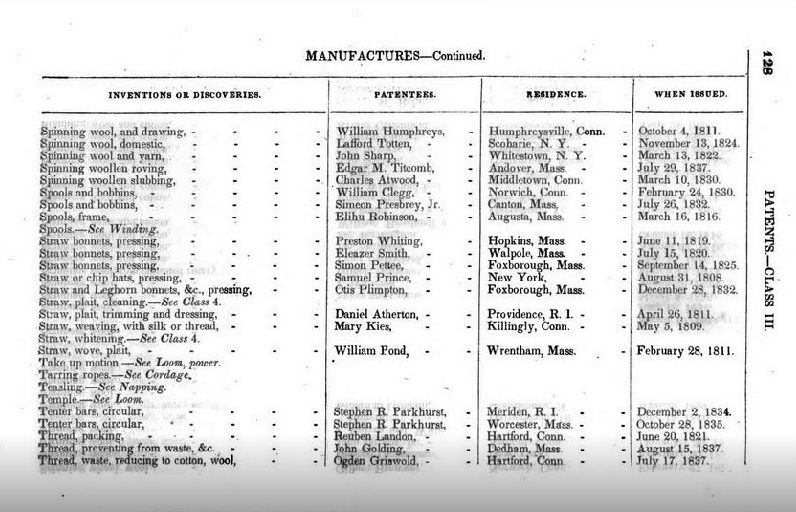 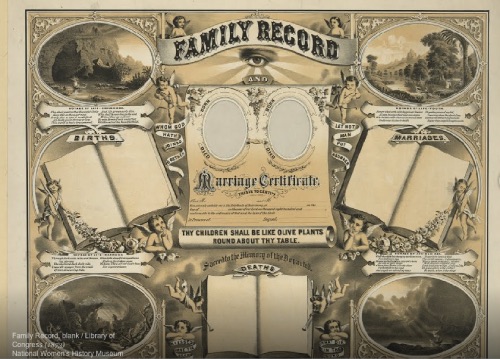 Inventing with her husband's permission

Marriage was a right of passage for 90% of women in nineteenth-century America. Under the common law, a married woman was bound by the rule of coverture, which vested her legal rights in her husband. 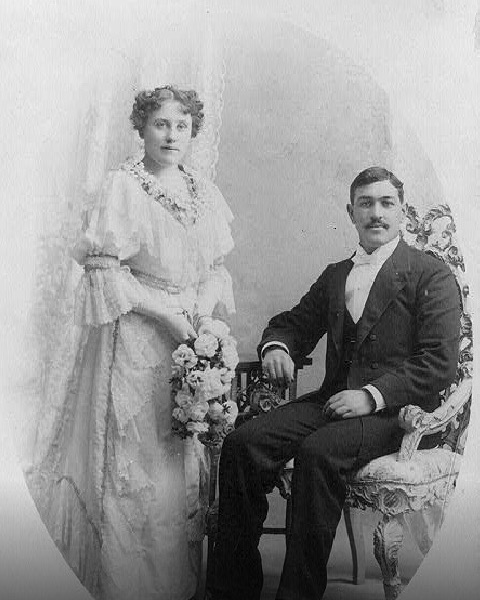 State laws governed women's property rights. Married women could own real property, like a house or farm. But they had no legal identities separate from their husbands. This meant that married women had no legal ability to manage their own property.

They couldn't sign contracts or bring civil suits in court. So, they could not open a bank account, buy or sell anything, sign a lease, control their own wages, or be a legal guardian to their own children. Without property rights, married women could patent an invention, but they could not manage the rights or manufacture. 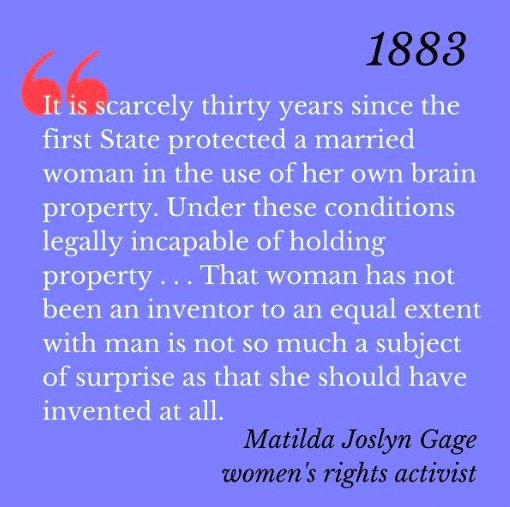 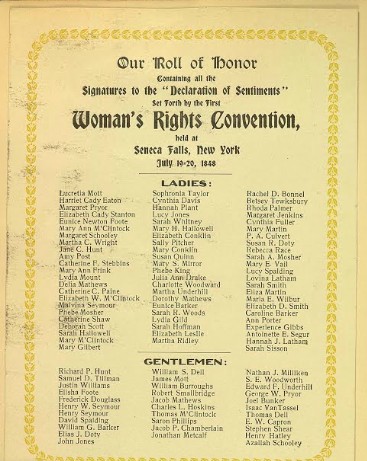 The Seneca Falls Convention of 1848 is best remembered for its call for voting rights. Equally important was the demand for women's property rights. 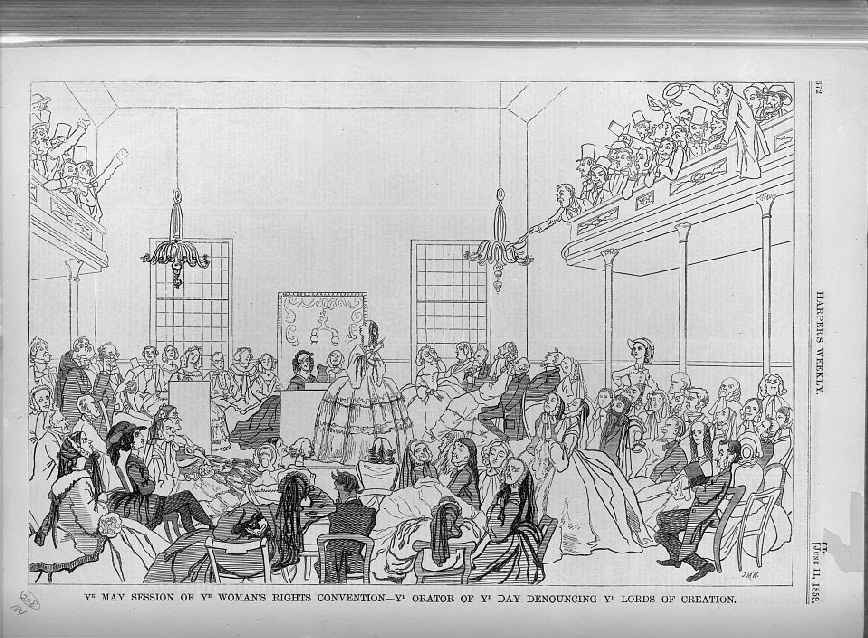 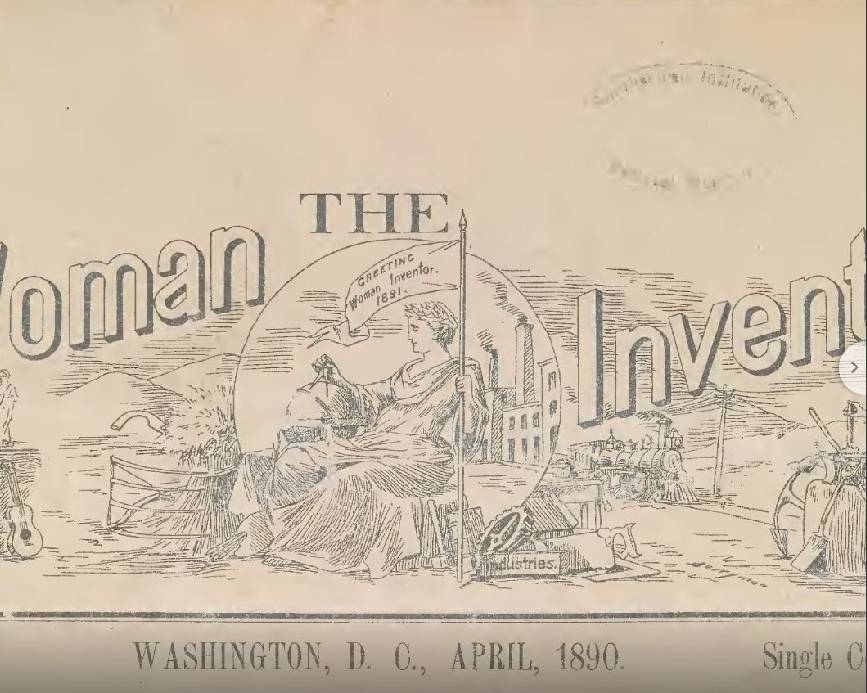 Charlotte Smith pointed out the insecurity women faced in a society that celebrated separate spheres. If a woman lacked access to useful education or training to earn her own living. If she had no means of self-support if she never married or her husband died, deserted her, or proved a wastrel, all the voting in the world would not help her. Smith was an economic feminist. 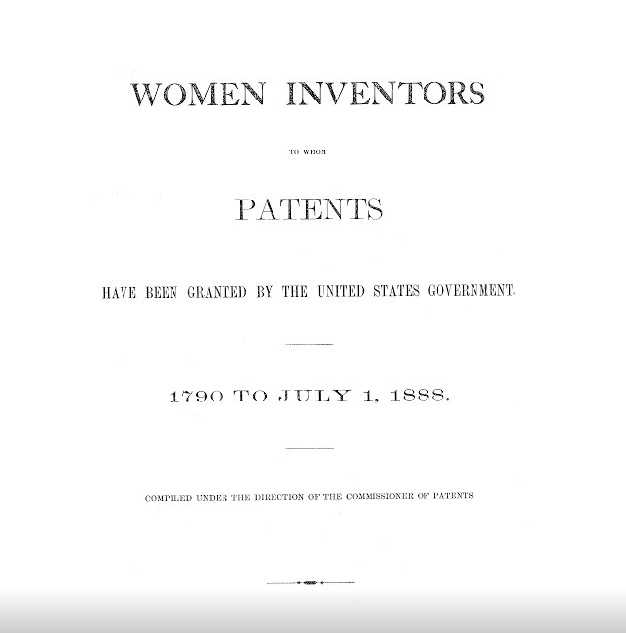 Smith became concerned with the plight of women inventors in 1875. She moved to Washington, DC in 1879 where she spent years pressuring the Patent Office to publish a list of women inventors to inspire more women's inventive activity. She was rewarded in 1888 when 500 copies of the list of "Women Inventors to Whom Patents Have Been Granted" was published. It took four clerks ten days to compile the list. 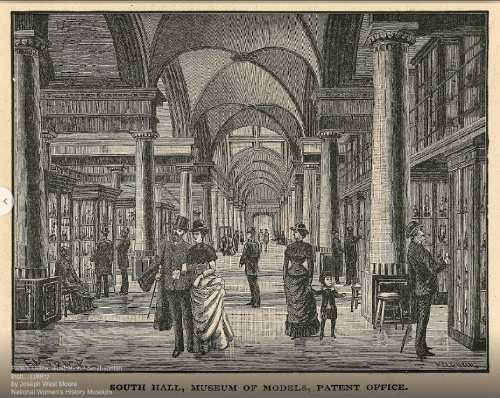 The Patent Office was a temple to invention. Partially modeled on the ancient Greek Parthenon, poet Walt Whitman rhapsodized that it as “noblest of the Washington buildings.” It was the opposite of a staid Washington office building. The main exhibit halls displayed thousands of models of patented devices, submitted by both men and women. Perusing American innovation became a favorite afternoon past time. 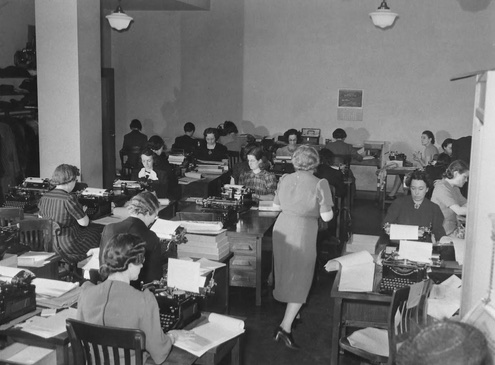 In 1872, the Patent Office hired Anne Freeman as its first female patent examiner, possibly encouraging women to submit inventions that they might have feared would be viewed with less sympathy by men.

Smith continued her crusade through the following decades. She lobbied for working women's accomplishments to be celebrated at Chicago's World's Columbian Exposition of 1892-93 in a Woman's Building.

"Many persons do not give wage women any credit for their honor and integrity, in fact do not admit that they are in possession of such qualities. [T]he mission of the Working Woman [newspaper]. . . [is] to elevate wage women socially, and to dignify labor." 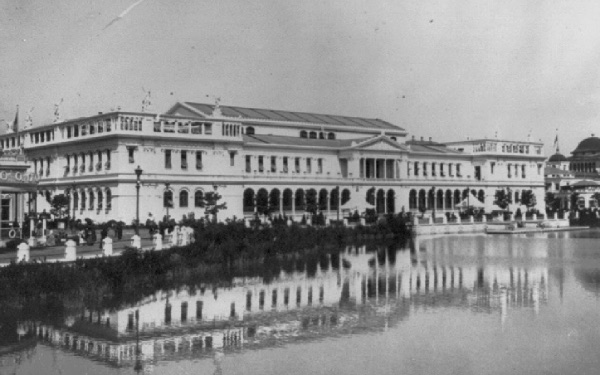 Harriet R. Tracy had 16 patents in her own name. Tracy's gravity elevator was installed in the Woman's Building at the Columbian Exhibition. She was among a number of women whose inventions were displayed. And sold. Nineteenth-century advocates of women's rights celebrated women like Harriet Tracy who patented technically advanced industrial machines. They discounted female invention and innovation in traditionally feminine spheres, even though women's inventive activity was heavily directed toward such household products as kitchen tools and apparel. 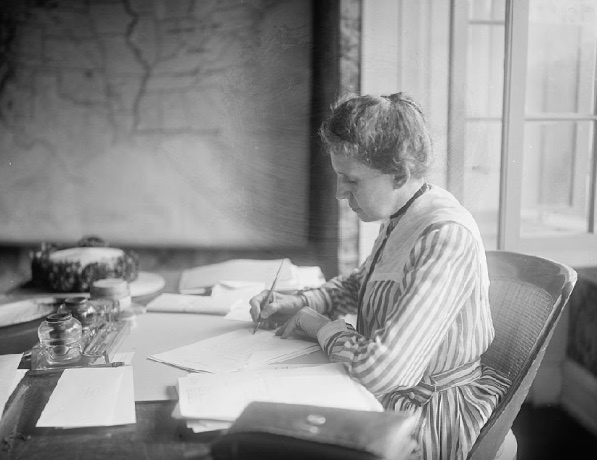 Ida Tarbell—an inventor herself—mused, "What does the record show? Three things worth knowing and believing: that women have invented a large number of useful articles: that these patents are not confined to 'clothes and kitchen' devices as the skeptical masculine mind avers; that invention is a field in which woman has large possibilities." Between 1865 and 1900, more than forty women patented inventions related to the railroad. Mary E. Walton invented a chimney used for locomotives, while both Augusta M. Rodgers and Mary J. Wyatt devised smoke-and-cinder conveyors for those chimneys. Sarah Harmon devised a novel window for locomotive cabs; this window employed a projecting cone to "protect the glass from rain, snow, and steam;" shelter "the engineer from hail, sparks, wind, snow and rain;" and "aid the vision of the engineer." Life-raft schematic for patent application (May 16, 1882) by Maria Beasley

Maria Beasley made a fortune from her 16 patents for articles as diverse as barrel making machines, an improved bread kneader, and a more buoyant life-raft. However, less than one-quarter of women's patented inventions were in nontraditional fields likes tools, industrial and agricultural machinery, transportation, construction, and chemicals. Inventors tend to invent in their areas of expertise. The patterns of invention when separated by industrial category show that women's patents predominantly related to the role of women in the home and family.

Luckily for all, American women inventors achieved in many fields. As a child, Margaret Knight preferred whittling and building kites to playing with dolls and dishes. Her brothers worked in a textile mill. It was after witnessing an accident that Knight invented her first useful device...at age 12. It was a safety mechanism to prevent flyaway spindles on looms. She went onto register 24 patents for industrial machines including paper-gab manufacturing, shoe manufacturing, and rotary engines. 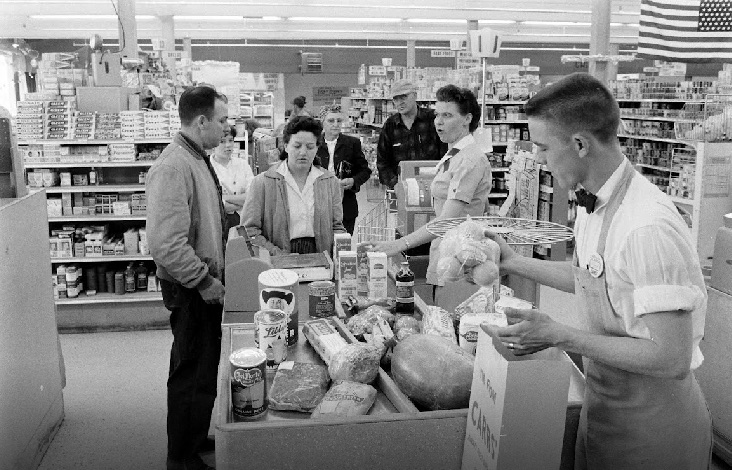 Her lasting impact is in the invention of a machine that folded and glued flat bottom paper bags, found in every grocery store. A 1913 New York Times feature referred to her as the "woman Edison" and lauded her for working 20 hours per day on her 89th invention at age 70. 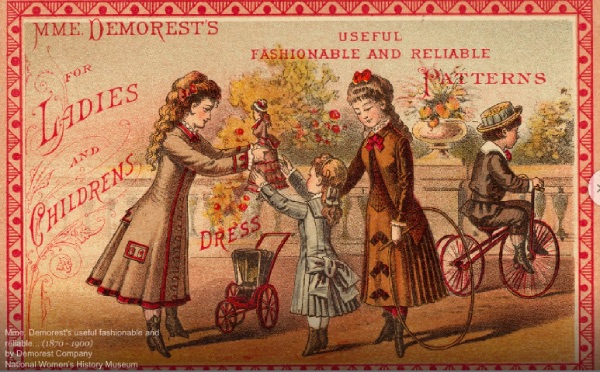 Trained as a milliner and dressmaker, Ellen Louise Demorest introduced high fashion to the mass market. By 1876, Madame Demorest "was acknowledged to be the unchallenged dictator of American fashion." Madame Demorest's Quarterly Mirror of Fashions debuted in 1860 to promote the Demorests’ New York City fashion emporium. Demorest designed clothing, illustrated ensembles in the magazine, and distributed clothing patterns. Her national network of agent dressmakers reproduced her designs for local clients, using her patterns. By 1876, the Demorests were selling three million patterns to eager buyers. Following a marriage of short duration, Harriet A. Brown took up millinery and dressmaking in 1870s Boston. She found standard methods of measuring, drafting, and cutting inefficient and time wasting to an entrepreneur concerned with profits. In response, she developed a scientific system for cutting and assembling well-fitting women’s clothing. She exhibited her system at the World's Columbian Exposition in 1892 where she took the first medal, validating her methods. In 1886, she founded the Boston Dress-Cutting College to teach her method of cutting and sewing to other women. Through the college, Brown hoped to make unskilled working women self-sufficient by teaching them a marketable trade. Brown filed one of the earliest patents for a woman’s “waist” in 1888. And she was not hesitant in protecting her rights. “It has been a business necessity for me to protect my patents,” she said. “Whatever I have done or may hereafter do, in this line, is justified by the natural law of self-preservation.”

Her standardized construction approach along with the burgeoning use of paper patterns laid a foundation for mass production of women’s clothing. Factory-produced and store-bought, women’s shirtwaists became ubiquitous on everyone from factory girls to office clerks to college women. Josephine Garis Cochran, born into a family of engineers and innovators, invented the first practical dishwasher. Her motivations were both practical and financial. Her initial impetus was to circumvent careless handling of her fine china by kitchen maids. However, after her husband died in 1883 leaving behind significant debts, Cochrane turned to inventing to become financially independent. She designed a set of racks to be lowered inside a copper boiler. The operator pumped a continuous water spray over the dishes and ended by hand pouring boiling water into the machine. Cochrane hired a mechanic to build her design, patented the invention in 1886, and hired a manufacturing company to fill orders. She opened the Garis-Cochrane Dish-Washing Machine Company in 1897. Cochrane exhibited her dish-washer at the 1893 World's Columbian Exhibition where she won first place "best mechanical construction, durability and adaptation to its line of work." Hotels and high-end restaurants were among her first customers, surely attracted by a machine that “wash[es] in an hour the entire service for 400 guests.” Cochrane iterated on her design, patenting her innovations. 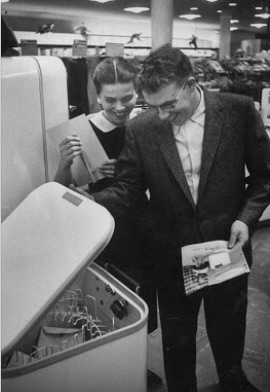 American women and girls continue to innovate. An encouragement for girls to pursue STEM interests guarantees a steady supply of "Inventive Women" into the future.

Chused, Richard. “Married Women's Property Law, 1800-1850.” Georgetown Law Journal 71 (1983): 1359. A law journal article that gives a good overview of this group of laws; it suggests locations of relevant collections and provides passage dates and statistics on the impact of legislation. https://digitalcommons.nyls.edu/cgi/viewcontent.cgi?referer=https://www.google.com/&httpsredir=1&article=1279&context=fac_articles_chapters

Carroll Pursell, "Women Inventors in America," Technology and Culture, Vol. 22, No. 3 (Jul., 1981), pp. 545-549. Published by: The Johns Hopkins University Press and the Society for the History of Technology