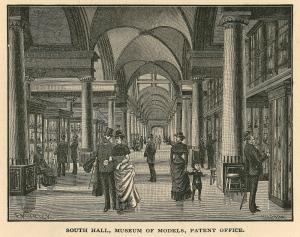 Nineteenth-century America was a time of innovation and invention. A youthful and expanding population embraced change and technology, completely transforming daily life by the end of the century. Inventive Women - Part 1 introduces students to the 19th-century Women’s Rights Movement through the topic of women and invention. By focusing on the United States Patent system, it provides a historical context for the 19th-century's Industrial Revolution.

By learning about the US Patent system and the process of invention, students will discover that the patent system spurs economic development by encouraging innovation. Women inventors took part by inventing new technologies, patenting inventions, and marketing their discoveries.

20 minutes. The time does not include the  materials to read before class.

Read prior to class

Step 1: Look at the evolution of a specific technology: the umbrella.

Step 2:  Compare the original design of the umbrella to modern designs.

Ask students to look at the umbrellas that they brought in. Compare the umbrellas to one another. Notice that there is a wide variety of features in modern umbrellas like size, shape, colors, materials, etc.

Question: How have modern umbrellas improved over the parasols?

Step 3: Explain that the US Patent system was established 1791, after the ratification of the US Constitution.

Step 4: Use patent drawings as primary sources to learn how patents document the evolution of technology and encourage innovation. Learn how women have participated in the patent system.

Pass out printed versions of the three PDFs of umbrella innovations. Ask students to read the patent descriptions one at a time. Highlight or circle the aspects of each invention that were new technologies.

Step 5: Students have read the Inventive Women on-line exhibit and Allgor's "Coverture" article. Discuss the 19th-century system of laws that made it difficult for women, and married women in particular, to participate in the economy.

Discuss the following questions or assign them homework or in-class writing prompts.

Step 5 of the lesson may be assigned as writing homework.

CCSS.ELA-Literacy.RH.6-8.2
Determine the central ideas or information of a primary or secondary source; provide an accurate summary of the source distinct from prior knowledge or opinions.

CCSS.ELA-Literacy.RH.6-8.3
Identify key steps in a text's description of a process related to history/social studies (e.g., how a bill becomes law, how interest rates are raised or lowered).

CCSS.ELA-Literacy.RH.6-8.4
Determine the meaning of words and phrases as they are used in a text, including vocabulary specific to domains related to history/social studies.

CCSS.ELA-Literacy.RH.6-8.7
Integrate visual information (e.g., in charts, graphs, photographs, videos, or maps) with other information in print and digital texts.

CCSS.ELA-Literacy.RH.9-10.1
Cite specific textual evidence to support analysis of primary and secondary sources, attending to such features as the date and origin of the information.

CCSS.ELA-Literacy.RH.9-10.2
Determine the central ideas or information of a primary or secondary source; provide an accurate summary of how key events or ideas develop over the course of the text.

CCSS.ELA-Literacy.RH.9-10.4
Determine the meaning of words and phrases as they are used in a text, including vocabulary describing political, social, or economic aspects of history/social science.

CCSS.ELA-Literacy.RH.9-10.5
Analyze how a text uses structure to emphasize key points or advance an explanation or analysis.

CCSS.ELA-Literacy.RH.9-10.8
Assess the extent to which the reasoning and evidence in a text support the author's claims.

Integrate and evaluate multiple sources of information presented in diverse formats and media (e.g., visually, quantitatively, as well as in words) in order to address a question or solve a problem.

CCSS.ELA-Literacy.RH.11-12.1
Cite specific textual evidence to support analysis of primary and secondary sources, connecting insights gained from specific details to an understanding of the text as a whole.

CCSS.ELA-Literacy.RH.11-12.2
Determine the central ideas or information of a primary or secondary source; provide an accurate summary that makes clear the relationships among the key details and ideas.

CCSS.ELA-Literacy.RH.11-12.9
Integrate information from diverse sources, both primary and secondary, into a coherent understanding of an idea or event, noting discrepancies among sources.