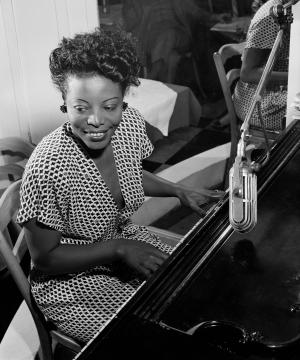 One of the greatest jazz pianists, composers, and arrangers of all time, Mary Lou Williams was a swing and bebop icon. “The Lady Who Swings the Band” also devoted herself to aiding musicians in need and teaching younger generations about jazz’s rich African American heritage.

Mary Lou Williams was born Mary Elfrieda Scruggs in Atlanta, Georgia on May 8, 1910. Her father left the family shortly after she was born and her mother, Virginia Winn, married Williams’s stepfather, Fletcher Burley. When Williams was four, her mother and stepfather moved the family to Pittsburgh, Pennsylvania. It was around this age that Williams’s mother taught her to play the piano. Williams excelled at the instrument and learned to play ragtime, boogie-woogie, and blues, as well as popular and classical styles. Her uncle and grandfather paid her to play their favorite songs and family friends invited the young Williams to perform at their parties.

Nearby white families had been upset when Williams’s African American family moved to their East Liberty neighborhood and they harassed Williams and her parents, even throwing bricks at their house. When they discovered Williams’s remarkable talents on the piano, the harassment ended. Williams gave private concerts for white families in Pittsburgh, which led to her nickname, “the little piano girl of East Liberty."

Williams studied music at Pittsburgh’s Westinghouse Junior High School and listened endlessly to recordings by famous jazz musicians Jelly Roll Morton, Earl Hines, and Fats Waller that influenced her distinctive sound. By the time she was 15, Williams had gone on the road with a small band that accompanied a vaudeville act. Williams encountered hostility from managers and fellow musicians who did not want a woman to perform in the band, but the band’s saxophonist, John Williams, stood up for Williams’s right to play with them. She and John Williams married in 1926. By 1928, they were living in Kansas City, where John was a member of the Dark Clouds of Joy Orchestra and Williams built her local reputation as a pianist by playing with jazz greats like Jack Teagarden and Art Tatum.

In 1930, Williams filled in for a missing pianist in her husband’s band. The talented Williams was able to play ragtime bass, boogie-woogie, or swing with one hand, while incorporating melodies, harmonies, and counterrhythms that she played with her other hand. She became the group’s star soloist, billed as “The Lady Who Swings the Band.” She also seized the opportunity with the band to share several original compositions she had arranged. Williams’s arrangements helped the band (now known as Andy Kirk and His Twelve Clouds of Joy) achieve national renown in the 1930s, with hit songs like “Mary’s Idea,” and “Froggy Bottom.”

Williams was known for creative harmonies achieved by contrasting orchestra sections and combining instruments in unique groupings. Top bandleaders of the day, such as Benny Goodman, Louis Armstrong, and Duke Ellington, asked Williams to prepare fresh versions of popular songs for them, as well as her own original songs. As both an arranger and pianist, Williams helped forge the distinctive Kansas City swing sound of the 1930s.

Following her divorce from John Williams in 1942, Williams married trumpeter Harold “Shorty” Baker and the two formed their own band. Williams also led an all-women group that included noted jazz guitarist Mary Osborne and worked as a staff arranger for Duke Ellington. In 1945, the New York Philharmonic Orchestra performed her composition “Zodiac Suite,” which featured four sections, each in the style of different musician, and blended jazz and classical styles. Williams was an influential member of jazz’s bop movement in the 1940s, known for integrating bop innovations (like fast tempo, improvisation, and complex harmonies) into the swing style and mentoring bop icons such as Dizzy Gillespie, Charlie Parker, and Thelonious Monk.

By 1954, Williams was physically and mentally exhausted and quit performing. She instead pursued religious and charitable endeavors, converting to Catholicism and caring for musicians suffering from addiction and illness. She even offered her apartment as a rest home for those in need.

Persuaded by clergy that her work in jazz was her way of serving God (and encouraged by her friend Gillespie), Williams returned to performing in 1957. She became a leading advocate for jazz, dedicated to educating young African Americans about their musical heritage. She appeared on many radio and television shows, such as “The Today Show” and “Mr. Rogers’ Neighborhood.” In 1970, she recorded The History of Jazz, a mixed album of music and speech intended to educate listeners about the evolution of jazz. She also distributed the “Tree of Jazz,” an illustration that depicted the history of African American music from contemporary swing and bebop back to antebellum spirituals. It was important to Williams that jazz’s African American heritage not be erased as the style grew more popular.

Williams also resumed composing and arranging music, now incorporating religious themes into her repertoire. In 1964, Williams founded her own record label, Mary Records, to release her self-produced album Black Christ of the Andes. Williams released several more recordings on Mary Records over the next decade. In 1975, she performed the first-ever jazz mass at St. Patrick’s Cathedral in New York City before more than 3,000 people. While some objected to the jazz-style mass, Williams claimed that jazz constituted a sacred form of African American expression. She told the New York Post, "Americans don't realize how important jazz is. It's healing for the soul. It should be played everywhere — in churches, nightclubs, everywhere. We have to use every place we can."

Williams received a Guggenheim Fellowship (1972-1973) and in 1977 she was named an artist-in-residence at Duke University, where she led the jazz orchestra and taught jazz history. Williams passed away at home in Durham, North Carolina on May 28, 1981. A month after her death, musicians gathered in New York City for a tribute concert (“A Song of Love for Mary Lou Williams”) that raised funds for the Mary Lou Williams Foundation to provide jazz training for gifted youth.