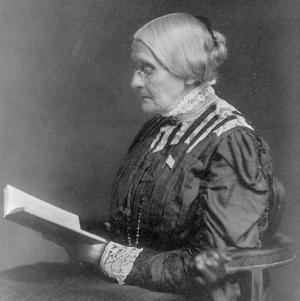 Champion of temperance, abolition, the rights of labor, and equal pay for equal work, Susan Brownell Anthony became one of the most visible leaders of the women’s suffrage movement. Along with Elizabeth Cady Stanton, she traveled around the country delivering speeches in favor of women's suffrage.

Susan B. Anthony was born on February 15, 1820 in Adams, Massachusetts. Her father, Daniel, was a farmer and later a cotton mill owner and manager and was raised as a Quaker. Her mother, Lucy, came from a family that fought in the American Revolution and served in the Massachusetts state government. From an early age, Anthony was inspired by the Quaker belief that everyone was equal under God. That idea guided her throughout her life. She had seven brothers and sisters, many of whom became activists for justice and emancipation of slaves.

After many years of teaching, Anthony returned to her family who had moved to New York State. There she met William Lloyd Garrison and Frederick Douglass, who were friends of her father. Listening to them moved Susan to want to do more to help end slavery. She became an abolition activist, even though most people thought it was improper for women to give speeches in public. Anthony made many passionate speeches against slavery.

In 1848, a group of women held a convention at Seneca Falls, New York. It was the first Women’s Rights Convention in the United States and began the Suffrage movement. Her mother and sister attended the convention but Anthony did not. In 1851, Anthony met Elizabeth Cady Stanton. The two women became good friends and worked together for over 50 years fighting for women’s rights. They traveled the country and Anthony gave speeches demanding that women be given the right to vote. At times, she risked being arrested for sharing her ideas in public.

Anthony was good at strategy. Her discipline, energy, and ability to organize made her a strong and successful leader. Anthony and Stanton co-founded the American Equal Rights Association. In 1868 they became editors of the Association’s newspaper, The Revolution, which helped to spread the ideas of equality and rights for women. Anthony began to lecture to raise money for publishing the newspaper and to support the suffrage movement. She became famous throughout the county. Many people admired her, yet others hated her ideas.

In 1872, Anthony was arrested for voting. She was tried and fined $100 for her crime. This made many people angry and brought national attention to the suffrage movement. In 1876, she led a protest at the 1876 Centennial of our nation’s independence. She gave a speech—“Declaration of Rights”—written by Stanton and another suffragist, Matilda Joslyn Gage.

Anthony spent her life working for women’s rights. In 1888, she helped to merge the two largest suffrage associations into one, the National American Women’s Suffrage Association. She led the group until 1900. She traveled around the country giving speeches, gathering thousands of signatures on petitions, and lobbying Congress every year for women. Anthony died in 1906, 14 years before women were given the right to vote with the passage of the 19th Amendment in 1920.