The Power of Words and Activism 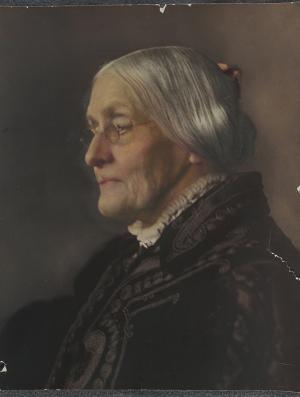 In the United States, peaceful protest has, for the large part, been the foundation of activism. And, one primary focus of protest for almost 200 years was the secondary status placed on women who were denied the vote until 1920. Coverture was legal in most states into the 20th century. This legal status meant that women could not vote, they could not own property and, by law, her assets were controlled by her husband. There was no recourse because women were disenfranchised citizens who did not have the legal right to vote. Although women began advocating for rights as early as the 1770s, it was not until 1848 that the Women’s Suffrage Movement officially began in Seneca Falls, NY. For the next 72 years, until the ratification of the 19th Amendment in August 1920, women actively, and peacefully, protested for suffrage.

Students will consider the Query: How do words and ideas have the power to act as a momentum for change?

Getting Started: What makes protest successful?

As a class, review essential characteristics of a good leader created by Forbes; as well as "Qualities of a good activist/activism" (pg 7). How do these qualities/traits apply when you consider leading or supporting a protest movement or a protest march? What would students add or change?

Tell the students that they are becoming Activists for Change.

Each group will create a 2-3 power point slides outlining what their team has added enhance the message of peaceful activism/ protest. Combine all slides into a class power point presentation which will persuade others to join the cause. Open your presentation with a quote from Susan B. Anthony.

Use the Activity to assess how well students comprehend the key nature of messaging a cause; creating emotional and intellectual connection, and having a clear purpose.

CCSS.ELA-LITERACY.W.7.1.B
Support claim(s) with logical reasoning and relevant evidence, using accurate, credible sources and demonstrating an understanding of the topic or text.

CCSS.ELA-LITERACY.W.7.1.C
Use words, phrases, and clauses to create cohesion and clarify the relationships among claim(s), reasons, and evidence.

CCSS.ELA-LITERACY.W.8.1.B
Support claim(s) with logical reasoning and relevant evidence, using accurate, credible sources and demonstrating an understanding of the topic or text.

CCSS.ELA-LITERACY.W.8.1.C
Use words, phrases, and clauses to create cohesion and clarify the relationships among claim(s), counterclaims, reasons, and evidence.

CCSS.ELA-LITERACY.W.9-10.1.E
Provide a concluding statement or section that follows from and supports the argument presented.

CCSS.ELA-LITERACY.W.11-12.1.B
Develop claim(s) and counterclaims fairly and thoroughly, supplying the most relevant evidence for each while pointing out the strengths and limitations of both in a manner that anticipates the audience's knowledge level, concerns, values, and possible biases.

D2.His.3.9-12. Use questions generated about individuals and groups to assess how the significance of their actions changes over time and is shaped by the historical context