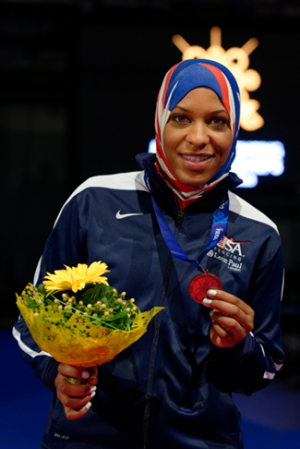 A world-class fencer, Ibtihaj Muhammad made history as the first American to wear a hijab in Olympic competition at the 2016 games in Rio de Janeiro. An entrepreneur and advocate for Muslim and African American women in sports, Muhammad inspires others to defy the limits society places on them.

Born on December 4, 1985 to parents Eugene Muhammad and Denise Garner, Ibtihaj Muhammad is one of six children.  Growing up in Maplewood, New Jersey, Muhammad participated in several sports, such as swimming, volleyball, tennis, and softball. Athletics were a challenge, however, as most uniforms did not conform with her Muslim faith, which called for covering her arms, legs, and head.

Muhammad began fencing at the age of 13. She got involved with the Peter Westbrook Foundation, a program established by fencing champion Westbrook to bring the sport to underserved communities in the New York area. Muhammad chose fencing for multiple reasons. The uniform offered not only full-body coverage but also allowed her to compete inconspicuously in her hijab (the traditional covering for the hair and neck worn by Muslim women). She also saw fencing as a pathway to academic opportunity, hoping to compete at the collegiate level. Lastly, Muhammad found the idea of an individual sport very appealing. As she put it, “I liked the idea of being solely responsible for the outcome of a match or a game.”

While fencing’s uniform may have been conducive to Muhammad’s religious practice, she still faced hostility from spectators and fellow athletes. Muhammad recalled the hurtful comments she encountered at fencing tournaments as a Black and Muslim individual. Lacking role models in her own sport, she drew inspiration from the confidence of Black tennis stars Venus and Serena Williams.

Muhammad graduated from Columbia High School in Maplewood, New Jersey in 2004. She earned an academic scholarship to Duke University, where she majored in international relations and African and African American studies, and studied Arabic. She excelled on Duke’s fencing team, earning All-American honors three times. There she took up the sabre, the fastest of the three fencing disciplines. The speed and aggression of the sabre suited Muhammad: “It’s the closest representation of who I am. I’m very aggressive,” she told the New York Times.

Muhammad graduated from Duke in 2007 and thought her fencing career was over. Unable to find a job in the corporate world, Muhammad became a clerk at the Dollar Store. Dispirited about her prospects, Muhammad visited her former high school fencing coach for a lesson. Afterward, he urged her to return to fencing competitively, and to aspire to international and even Olympic competition. Muhammad resumed training diligently and initially paid her competition fees with her earnings from the Dollar Store before obtaining a substitute teaching job. She rose through fencing’s rankings, going from 113th in the 2007-08 season to earn a spot on the U.S. national fencing team in 2010.

Joining Team USA came with many perks – her travel and competition costs were covered and she was officially a professional athlete – but it carried challenges as well. Other national team athletes excluded Muhammad and she felt particularly isolated as one of the few athletes of color in fencing. But she did not let this antagonism keep her down. Muhammad decided to be open about the challenges she faced as an African American Muslim woman in elite athletics, to try to make things easier for those who came after her. She also felt indebted to her predecessors who spoke out against the hate and bigotry minorities experienced in American society. In recognition of her athletic achievements and advocacy, Muhammad was named an International Sportswoman of the Year in 2012 by the Muslim Women’s Sport Foundation.

Muhammad accumulated numerous victories in her seven years on the U.S. national team. The team won gold at the 2014 World Championships and the 2011 and 2015 Pan American Games, and bronze at the 2011-2013 and 2015 World Championships. She earned a spot on the U.S. Olympic team in 2016, making her the first American athlete to compete in the Olympic Games while wearing the hijab, a feat that garnered great attention. In February 2016, she attended President Obama’s speech at the Islamic Society of Baltimore, where he encouraged her to bring home the gold. At a lead-up event to the 2016 Olympics, Muhammad gave First Lady Michelle Obama a fencing lesson in New York City’s Times Square. Time magazine included Muhammad in its list of the 100 Most Influential People of 2016. Muhammad helped the U.S. Olympic team win the bronze medal in saber fencing in Rio and placed 12th in her individual competition.

In addition to her athletic career, Muhammad runs a women’s clothing line with her siblings called Louella. They started it in 2014, in order to provide the modest yet stylish and ethically made clothing that they had long struggled to find in stores.

In 2018, Mattel released a Barbie doll with Muhammad’s likeness as part of its “Shero” line that honors accomplished women who inspire young girls. Muhammad’s doll was the first Barbie to wear the hijab, marking an important milestone in Muslim representation for the iconic toy. That same year, Muhammad released her memoir, Proud: My Fight for an Unlikely American Dream. It details her journey from childhood in New Jersey to the U.S. Olympic fencing team and the racism and xenophobia she encountered along the way.

Muhammad serves as a sports ambassador with the U.S. State Department’s Empowering Women and Girls through Sport Initiative. In 2017, President Obama nominated her to the President’s council on Fitness, Health & Nutrition. Muhammad also partners with advocacy-minded sports organizations such as the Special Olympics, Athletes for Impact, and Laureus Sport for Good.

Carpenter, Les. “Ibtihaj Muhammad: the US fencing star out to challenge intolerance and hate.” The Guardian. March 10, 2016. Accessed May 10, 2021. https://www.theguardian.com/sport/2016/mar/10/ibtihaj-muhammad-us-fencing-muslim-rio-olympics

Kaplan, Sarah. “Meet Ibtihaj Muhammad, the history-making Olympian who called out SXSW for telling her to remove her hijab.” The Washington Post. March 14, 2016. Accessed May 10, 2021. https://www.washingtonpost.com/news/morning-mix/wp/2016/03/14/meet-ibtihaj-muhammad-the-history-making-olympian-who-called-out-sxsw-for-telling-her-to-remove-her-hijab/