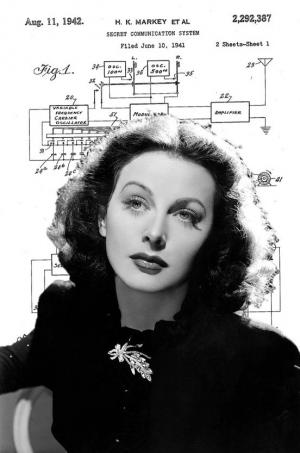 Hedy Lamarr, long known only for her beauty and numerous Hollywood roles, was a brilliant inventor. She would shoot a scene and return to her trailer to tinker with new ideas and inventions. One of her most brilliant inventions was that of a secret communication system that could guide military weaponry using “frequency-hopping” technology. This same technology is used today as the basis for WiFi, GPS, and Bluetooth. Students will learn about Lamarr’s double life as an actress and an inventor, what her inventions consisted of, the basic ideas behind her most significant invention, and how female inventors—both past and present—faced a multitude of challenges.

Students should understand that there are a range of electromagnetic waves that carry signals.

Hedy Lamarr used radio waves to invent her “frequency hopping” technology. A transmitting antenna generates and sends out radio waves due to an electrical current. This is made possible through wires inside the device that allow negatively charged particles, called electrons, to flow through them, creating an electrical current. When this current flows within the wire, it generates an electromagnetic field around the wire. This electromagnetic field is emitted out of the antenna in all directions as invisible radio waves.

When the electromagnetic radio waves hit a receiving antenna, such as in a radio, it generates a current inside of a wire in the receiver. The receiver then processes the current back into the transmitted information, which, for a radio, allows you to hear music or other broadcasts. In Hedy’s invention this allowed torpedoes to be guided in the proper direction and meet their final destination. Some materials can block the radio waves that the transmitter generates, which can be tested by seeing whether a receiver can process and respond to information sent by a transmitter. This is something Hedy accounted for when she worried about wartime enemies intercepting the torpedo’s signal, disabling its effectiveness. As a result Hedy and George Antheil decided that the transmitted signal must jump frequencies to avoid detection by the enemy.

Observations and results
After results are recorded, discuss findings and present the following explanation:

When you operate the car using its remote control, the remote control transmits radio waves at specific frequencies that can be received by the car. The remote control acts as a transmitter and the car as a receiver. Then, when the car receives the radio waves, which are electromagnetic waves, the waves generate a current in a wire in the car, and this tells the car which direction to move in.