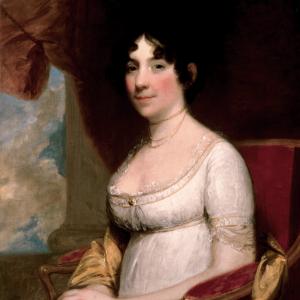 Dolley Madison, the fourth First Lady of the United States, is widely remembered as the most lively of the early First Ladies. Despite her Quaker roots, she was outgoing, energetic, fun-loving, and kind. As a prominent entertainer and hostess, she helped shape the role of First Lady and served as the model for every future First Lady to come.

Dolley Payne was born on May 20, 1768, in Guilford County, North Carolina. She was the fourth of eight children born to John and Mary Payne. The family moved to Philadelphia, Pennsylvania in 1783 when Madison was 15. She never received any formal education despite the fact that the Philadelphia Pine Street Meeting, the family’s Quaker meetinghouse, provided education for both boys and girls.

Philadelphia became the capital of the United States in 1790. Living there, gave her the opportunity to meet many important political figures. In 1794, Dolley Payne Todd married James Madison, a planter and Congressman from Virginia. Three years later, the couple moved to the Madison family plantation called Montpelier in Orange, Virginia. Madison managed the household and cared for her elderly mother-in-law.

In 1801, when James Madison was appointed President Thomas Jefferson’s Secretary of State, the Madison’s moved to Washington, DC, the new capital city. Between 1801 and 1809, Madison co-hosted events for President Jefferson. Jefferson’s wife Martha had died years earlier and it was common at that time for the wife of a friend to act as hostess for special events when there was no female head of house. While acting as hostess, Madison helped create events worthy of European politicians who expected to attend fine, upscale events. These social functions were important to the new nation’s image abroad. Jefferson depended on Madison to help earn the respect of visitors used to society in London and Paris. She also played a large part in fundraising for the Lewis and Clark Expedition which explored the newly acquired Louisiana Purchase with Sacagawea.

James Madison was elected president in 1808. On the evening of his inauguration, Dolley Madison sponsored the first Inaugural Ball. During their time in the White House, she was the first president’s wife to formally associate herself with a public charity project, sponsoring a home for orphaned girls in Washington, DC. Throughout her husband’s two terms, from 1809-1817, Madison was a main feature in the political society of the United States. She formed friendships with the wives of important politicians. Through these relationships, Madison was able to influence opinions in favor of her husband and his politics.

Madison is most remembered for her actions during the War of 1812. This War was fought between the United States and England and their allies. British troops invaded the Washington, DC and President Madison and his cabinet fled the city. As the British started to set fire to the city, she stayed behind at the White House to ensure the safe removal of important documents, silver, and art, including a large portrait of George Washington by Gilbert Stuart. Even though the British burned much of the city, including the White House, Madison continued entertaining in her temporary quarters, now called Dumbarton House, while the White House was repaired. Through Madison’s continued work entertaining politicians, she hoped to show the continued strength of the United States despite what happened to the capital city.

When President Madison’s second presidential term ended in 1817, the couple returned to Montpelier. James Madison died in 1836. After his death, Madison was forced to sell off much of his property, including Montpelier, to pay off the debts of her son.

After selling Montpelier, Madison moved to Washington, DC in 1844, where she spent the remainder of her life. While living in DC, she became a permanent fixture in DC society and in US politics. She continued to entertain and was beloved by politicians and DC residents alike. During this time, she was awarded an honorary seat in Congress, allowing her to watch Congressional debates from the floor. Madison was also chosen by inventor Samuel F. B. Morse to have the honor of being the first private citizen to send a message via telegraph.

On July 12, 1849, Dolley Payne Todd Madison died in Washington, DC at age eighty-one. Throughout her long life, she set the standard for all the First Ladies who would serve in that role in the future.

Allgor, Catherine. A Perfect Union: Dolley Madison and the Creation of the American Nation. New York: Henry Holt and Company, 2006.