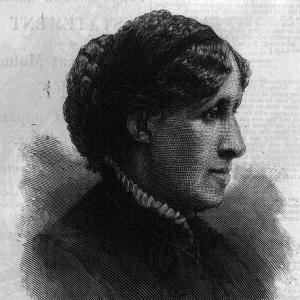 Alcott was born on November 29, 1832 in Philadelphia, Pennsylvania. Alcott’s parents were a part of the 19th century transcendentalist movement, a popular religious movement. Their religious and political beliefs deeply inspired Alcott as child. Her father, Bronson Alcott, was a popular educator who believed that children should enjoy learning. Therefore, at an early age, Alcott took to reading and writing. While most of her schooling came from her parents she also studied under famed philosopher Henry David Thoreau and popular authors Ralph Waldo Emerson and Nathanial Hawthorne. Much like her novel Little Women, Alcott was one of four daughters and she remained close with her sisters throughout her life. Many times, Alcott’s family suffered from financial woes, forcing her to attend school irregularly. She took many jobs to help alleviate financial struggles, working as teacher and washing laundry. She turned to writing for both emotional and financial support.

Her first poem, “Sunlight,” was published in a magazine under a pseudonym. Her first book, a compilation of short stories, was published in 1854.  When the Civil War started in 1861, Alcott served as a nurse in a Union hospital. Unfortunately, in the middle of her assignment she contracted typhoid fever. Her experience in the hospital as a patient and a nurse, inspired the novel Hospital Sketches. After the war, Alcott published several other works and gained a following. Her audience included both adults and children. She also released many of her earlier works under the name, A.M. Barnard.

During this time, one of Alcott’s publishers asked her to write a novel for young women. To do so, she simply reflected back on to her childhood with her sisters. In 1868, Alcott published her most popular work, Little Women. The novel was published in a series of short stories, but was eventually compiled into one book. Little Women was an instant success and the book cemented Alcott as one of the foremost novelist of the 19th and early 20th century. In 1870, with one successful book, Alcott moved to Europe with her sister May. There she published, another classic Little Men. She also joined the women’s suffrage movement. Throughout her life, she would contribute to several publications which promoted women’s rights. She was also the first woman to register to vote in Concord, Connecticut.

Alcott never married nor had any children, however, when her sister died, she adopted her niece. Afterwards she moved to Boston, Massachusetts and continued publishing more works that followed the characters from Little Women. Alcott suffered from bouts of illness throughout her life. She attributed her poor health to mercury poisoning which she believed she contracted while she worked as a nurse during the Civil War. In 1888, she died at the age of 56 in Boston, Massachusetts. Today, readers continue to enjoy Alcott’s writings and her novels still appear on bestseller list throughout the world.

While many date the “first wave” of feminism to the Women’s Rights Convention held in 1848 in Seneca Falls, the origins of the feminism movement lay much earlier.
READ MORE