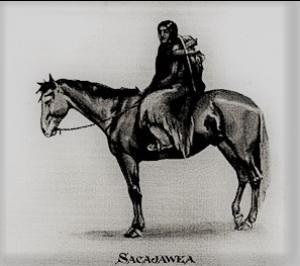 Sacagawea was an interpreter and guide for Meriwether Lewis and William Clark’s expedition westward from the Mississippi River to the Pacific Coast. Though spelled numerous ways in the journals of expedition members, Sacagawea is generally believed to be a Hidatsa name (Sacaga means “bird” and wea means “woman”). In that case, the third syllable starts with a hard g, as there is no soft g in the Hidatsa language. However, many Shoshone Indians maintain that it is a Shoshone name meaning “boat launcher” and spell and pronounce it “Sacajawea.”

Sacagawea was born circa 1788 in what is now the state of Idaho. When she was approximately 12 years old, Sacagawea was captured by an enemy tribe, the Hidatsa, and taken from her Lemhi Shoshone people to the Hidatsa villages near present-day Bismarck, North Dakota. Following her capture, French-Canadian trader Toussaint Charbonneau, who was living among the Hidatsa, claimed Sacagawea as one of his wives.

In 1803, the Louisiana Purchase of western territory from France by President Thomas Jefferson nearly doubled the size of the United States. With the acquisition of so much land, it was necessary to determine the actual boundaries of the country. Jefferson hired Virginia’s Meriwether Lewis to explore the land. Lewis sought out frontiersman William Clark and together they led about 40 men in three boats up the Missouri River. During the winter months, Lewis and Clark made the decision to build their encampment, Fort Mandan, near the Hidatsa-Mandan villages where Charbonneau and Sacagawea were living.

Charbonneau proposed that Lewis and Clark hire him as a guide and interpreter. Charbonneau knew Hidatsa and the sign languages common among the river tribes. Additionally, his marriage to the Shoshone Sacagawea would be useful as they traveled west, where they would likely encounter and need to trade with the Shoshone. Lewis and Clark hired Charbonneau as a member of their expedition, the Corps of Discovery, while Sacagawea was expecting her first child. The Americans stayed in their relatively safe and warm camp through the winter of 1804-05 and waited into the spring so that Sacagawea could accompany them west. On February 11, 1805, Sacagawea gave birth to a son, Jean-Baptiste Charbonneau, whom Clark later nicknamed "Pomp," meaning "first born" in Shoshone. With her her baby on her back and her husband by her side, Sacagawea and the men left Fort Mandan on April 7, 1805.

At about 17 years of age, she was the only woman among 31 older men on this portion of the expedition. Each member of the Corps of Discovery was hired for a special skill such as hunting, woodworking, blacksmithing, and sailing. Though Sacagawea’s role as a guide was limited to the Idaho/Montana region where she had grown up (rather than the entirety of the expedition), she still proved critical to the Corps.  Her knowledge of the Shoshone and Hidatsa languages was a great help during their journey. She communicated with other tribes and interpreted for Lewis and Clark. She was also skilled at finding edible plants, which proved to be crucial to supplementing their rations along the journey. Further, Sacagawea was valuable to the expedition because her presence signified peace and trustworthiness. A group of men traveling with a woman and her baby appeared less menacing than an all-male group, which could be mistaken for a war party. Sacagawea and her baby helped those they encountered feel it was safe to befriend the newcomers. However, despite all her contributions, only Sacagawea’s husband ever received payment for work on the expedition.

Sacagawea faced the same dangers and difficulties as the rest of the expedition members, in addition to caring for her infant son. During a crisis on May 14, 1805, Sacagawea showed bravery and clear thinking that earned Lewis and Clark’s praise and gratitude. Charbonneau was steering a boat through choppy waters when a sudden gust of wind caused the boat to tip sideways and fill with water. The expedition’s valuable supplies fell into the water and Charbonneau froze. Sacagawea stayed calm and rescued instruments, books, gunpowder, medicines, and clothing from the water. Without these supplies, the expedition would have been in serious trouble.

In July of 1805, the Corps was traveling up the Missouri River when Sacagawea recognized the three forks of the Missouri River. They were near an area where her people camped. On August 15, 1805, the expedition encountered the Shoshone tribe. Lewis and Clark arranged for a meeting with the chief, Cameahwait, and Sacagawea served as the translator. As she began interpreting, she realized that the chief was in fact her brother. She ran to embrace him and wept from joy. Though she was moved to tears, she resumed her duty as interpreter. She convinced the Shoshone to provide additional guides and horses to the expedition members.

Sacagawea continued with the Corps of Discovery and the expedition reached the Pacific Ocean on November 15, 1805. Soon after, they needed to determine where they would establish their winter quarters. Clark’s journal shows that Sacagawea contributed to this decision, a sign of the respect the white, male crewmembers held for her knowledge of the land. They built Fort Clatsop near the Columbia River and stayed there until March 23, 1806.

For the return journey, the Corps divided into two groups, one led by Lewis and the other by Clark. Traveling with Clark, Sacagawea guided his group south of the Yellowstone River by recommending a route through the Rocky Mountains (known today as Bozeman Pass). Clark wrote in his journal on July 13, 1806:

“The Indian woman . . . has been of great service to me as a pilot through this country.”

The two groups reunited on August 12, 1806. They arrived at the Hidatsa villages two days later, where Sacagawea and her family departed the expedition. Lewis and Clark prepared for their journey back to St. Louis, but before they left, Clark offered to take Sacagawea’s son Pomp back to St. Louis with him. He would see that Pomp received a good education and would raise Pomp as his own. Sacagawea and Charbonneau felt Pomp was too young (he was not yet two) but indicated they would bring him to St. Louis when he was older.

Sacagawea likely gave birth to a daughter named Lisette in 1812. There is some ambiguity around Sacagawea’s death. Records from Fort Manuel (Manuel Lisa’s trading post) indicate that she died of typhus in December 1812. However, according to some Native American oral histories, Sacagawea lived for many more years in the Shoshone lands in Wyoming, until her death in 1884.

Kessler, Donna J. The Making of Sacagawea: A Euro-American Legend. Tuscaloosa, Ala.: University of Alabama Press, 1996.