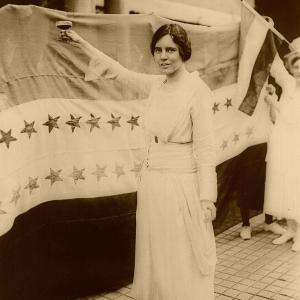 A vocal leader of the twentieth century women’s suffrage movement, Alice Paul advocated for and helped secure passage of the 19th Amendment to the US Constitution, granting women the right to vote. Paul next authored the Equal Rights Amendment in 1923, which has yet to be adopted.

Born on January 11, 1885 in Mount Laurel, New Jersey, Paul was the oldest of four children of Tacie Parry and William Paul, a wealthy Quaker businessman. Paul’s parents embraced gender equality, education for women, and working to improve society. Paul’s mother, a suffragist, brought her daughter with her to women’s suffrage meetings.

Paul attended Swarthmore College, a Quaker school cofounded by her grandfather, graduating with a biology degree in 1905. She attended the New York School of Philanthropy (now Columbia University) and received a Master of Arts degree in sociology in 1907. She then went to England to study social work, and after returning, earned a PhD from the University of Pennsylvania in 1910.

While in England, Paul met American Lucy Burns, and joining the women’s suffrage efforts there, they learned militant protest tactics, including picketing and hunger strikes. Back in the United States, in 1912, Paul and Burns joined the National American Woman Suffrage Association (NAWSA), with Paul leading the Washington, DC chapter. NAWSA primarily focused on state-by-state campaigns; Paul preferred to lobby Congress for a constitutional amendment. Such differences led Paul and others to split with NAWSA and form the National Woman's Party.

Borrowing from her British counterparts, Paul organized parades and pickets in support of suffrage. Her first—and the largest—was in Washington, DC, on March 3, 1913, the day before President-elect Woodrow Wilson’s inauguration. Approximately eight thousand women marched with banners and floats down Pennsylvania Avenue from the Capitol to the White House, while a half million spectators watched, supported and harassed the marchers. On March 17, Paul and other suffragists met with Wilson, who said it was not yet time for an amendment to the Constitution. On April 7, Paul organized a demonstration and founded the Congressional Union for Woman Suffrage to focus specifically on lobbying Congress.

In January 1917, Paul and over 1,000 “Silent Sentinels” began eighteen months of picketing the White House, standing at the gates with such signs as, “Mr. President, how long must women wait for liberty?” They endured verbal and physical attacks from spectators, which increased after the US entered World War I. Instead of protecting the women’s right to free speech and peaceful assembly, the police arrested them on the flimsy charge of obstructing traffic. Paul was sentenced to jail for seven months, where she organized a hunger strike in protest. Doctors threatened to send Paul to an insane asylum and force-fed her, while newspaper accounts of her treatment garnered public sympathy and support for suffrage. By 1918, Wilson announced his support for suffrage. It took two more years for the Senate, House, and the required 36 states to approve the amendment.

Afterward, Paul and the National Women’s Party focused on the Equal Rights Amendment (ERA) to guarantee women constitutional protection from discrimination. Paul spent her life advocating for this and other women’s issues. The ERA was ratified by 35 states in the 1970s, but by the 1982 deadline was three states short of 38 needed to become a constitutional amendment.