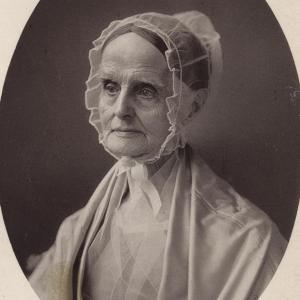 Lucretia Coffin Mott was an early feminist activist and strong advocate for ending slavery. A powerful orator, she dedicated her life to speaking out against racial and gender injustice.

Born on January 3, 1793 on Nantucket Island, Massachusetts, Mott was the second of Thomas Coffin Jr.’s and Anna Folger Mott’s five children. Her father’s work as a ship’s captain kept him away from his family for long stretches and could be hazardous—so much so that he moved his family to Boston and became a merchant when Lucretia was 10 years old.

Mott was raised a Quaker, a religion that stressed equality of all people under God, and attended a Quaker boarding school in upstate New York. In 1809, the family moved to Philadelphia, and two years later, Mott married her father’s business partner, James Mott, with whom she would have six children. In 1815, her father died, saddling her mother with a mountain of debt, and Mott, her husband, and her mother joined forces to become solvent again. Mott taught school, her mother went back to running a shop, and her husband operated a textile business.

Mott, along with her supportive husband, argued ardently for the abolitionist cause as members of William Lloyd Garrison’s American Anti-Slavery Society in the 1830s. Garrison, who encouraged women’s participation as writers and speakers in the anti-slavery movement embraced Mott’s commitment. Mott was one of the founders of the Philadelphia Female Anti-Slavery Society in 1833. Not everyone supported women’s public speaking. In fact, Mott was constantly criticized for behaving in ways not acceptable for women of her sex, but it did not deter her.

Mott’s stymied participation at the World Anti-Slavery Convention in London in 1840 brought her into contact with Elizabeth Cady Stanton with whom she formed a long and prolific collaboration. It also led Mott into the cause of women’s rights. As women, the pair were blocked from participating in the proceedings, which not only angered them, but led them to promise to hold a women’s rights convention when they returned to the United States. Eight years later, in 1848, they organized the Seneca Falls Convention, attended by hundreds of people including noted abolitionist Frederick Douglass. Stanton presented a “Declaration of Sentiments” at the meeting, which demanded rights for women by inserting the word “woman” into the language of the Declaration of Independence and included a list of 18 woman-specific demands. These included divorce, property and custody rights, as well as the right to vote. The latter fueled the launching of the woman suffrage movement. Mott explained that she grew up “so thoroughly imbued with women’s rights that it was the most important question” of her life. Following the convention Mott continued her crusade for women’s equality by speaking at ensuing annual women’s rights conventions and publishing Discourse on Women, a reasoned account of the history of women’s repression.

Her devotion to women’s rights did not deter her from fighting for an end to slavery. She and her husband protested the passage of the Fugitive Slave Act of 1850 and helped an enslaved person escape bondage a few years later. In 1866, Mott became the first president of the American Equal Rights Association. Mott joined with Stanton and Anthony in decrying the 14th and 15th amendments to the Constitution for granting the vote to black men but not to women. Mott was also involved with efforts to establish Swarthmore College and was instrumental in ensuring it was coeducational. Dedicated to all forms of human freedom, Mott argued as ardently for women’s rights as for black rights, including suffrage, education, and economic aid. Mott played a major role in the woman suffrage movement through her life.