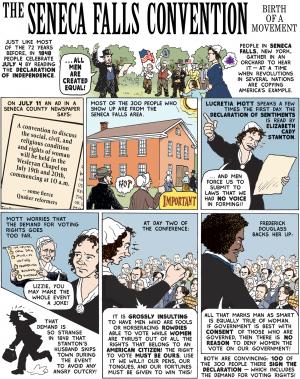 Chester Comix has created comic strip panels especially for the National Women’s History Museum exploring the importance of the Seneca Falls Convention and four people—Elizabeth Cady Stanton, Lucretia Mott, Frederick Douglass and Sojourner Truth—who were 19th century leaders in the struggle for equality and equal rights. In this lesson, students will explore the Convention and imagine living at a time in the United States when women did not have important legal rights; including the right to vote. Students will learn how the Convention marked the beginning of the Suffrage Movement; a model of peaceful activism that eventually led to the passage of the 19th Amendment almost 72 years after the Seneca Falls convention. Through using the history and ideas shared in the comic panels as well as the techniques demonstrating how to teach through comics, the students will work collaboratively to research, gain a richer understanding of women’s suffrage, and create their own comic panels exploring the outcomes of the Suffrage movement by illustrating the 1913 Woman Suffrage Procession or the ratification of the 19th Amendment in August 1920.

This curriculum relevant lesson will require students to write narratives and use effective techniques and descriptive details to develop real or imagined experiences and use concrete words and phrases to convey historical events.

Students should have a basic knowledge of the struggle for women’s rights, abolition, the Declaration of Independence, and America’s legacy of peaceful activism and protest for equality. Suggestion: as a class, you review the Woman Suffrage Timeline for an overview of the suffrage movement. (Suggested Activity 1)

It is advisable to front load vocabulary words; especially for ELL students. The Graphic Organizer, What is that Word, can be used to help students identify and find the definition for unknown words. You can also ask students to keep a “Vocabulary Journal” to identify new words and to help build their vocabulary. Use the Vocabulary Guide to identify words and concepts that may be unfamiliar to students. Encourage students to use a vocabulary diary or the What is that Word worksheet to build their knowledge and understanding of the words used in the lesson.

When looking at the comics, students can feel out the meaning based on the context and action taking place. Encourage students to look at any actions or objects in the panel that illustrate what is happening in the story to help them define the word.

Getting Started: Introduce your students to the Suffrage Movement.

Encourage your students to imagine a time when American women could not vote and had no voice in electing officials who made the laws that govern the nation.

If possible, project on screen:

Explain that this sentence changed history. It is from the 19th amendment which was ratified (passed) on August 18, 1920; 133 years after the ratification of the Constitution! Over the course of those 133 years and despite the fact that they were declared citizens of the United States under the 14th Amendment—women—by law, could not vote. Ask students to reflect on the condition of women who had no say in deciding their future. They could not vote for any elected office from President to local officials, even the dog catcher! The law did not allow women to have a voice in the day to day laws which impacted their lives.

Until well into the 1800s, women were “disenfranchised”. Their property became that of their husband when they married. Very few had a formal education. Even the wages they earned belonged to their husband and they did not have the right to vote.

How do you think women felt about that?

By the mid-1900s, hundreds of thousands of women protested for the right to vote. They were called Suffragists.

Ask: Can anyone can name an important Suffragist?

Ask: Can you think of another group of people that suffered the same injustices that women did?

In 1848, the Suffragist Movement formally began with the Seneca Falls Convention.

As a class, look at the Woman Suffrage Timeline. Students will share out what they learned and their thoughts with each other. If time permits, allow a 10-minute share out discussion with the class as a whole. What surprises the students?

Activity One: Reading History through Comics

Before beginning the activities, ask your students:

Full Group Activity: Each student should have a graphic organizer (See, Say, Think #1)

Project the Seneca Falls Convention comic with the words blanked out

Groups should then share out as a class. Use the How Does It Relate Graphic Organizer. Depending on the size of the class and your normal template for group work; group share can be done in a number of ways;

“What happened at the Seneca Falls Convention?” “Why is this Convention historically important?” “Who were the “big names” at the Convention?”

Give students time to review their graphic organizers from Day 1 and confer with their table group. Each group will share one or two key facts. (10 minutes)

Ask students to give a few examples of how Sojourner Truth was able to answer the arguments that people made as to why women shouldn’t have equal rights.

(Suggest: this activity would be appropriate for the whole class)

Groups will follow the same procedure as Day One using the See, Say, Think #2 graphic organizer.

Explain to them that the What Do I Think should be used to explain the importance of their featured person to the success of the Convention. (30 minutes)

Each group will share their featured person with the class, highlighting the contributions to the Seneca Convention. (20 minutes) Project each group’s assigned panel during read out so that every student can follow the story and ideas.

Remind the class that the lesson opened with the questions, What Makes Someone a Hero? Ask them after reading and discussing these comic panels: Who do you think is a hero? Why?

Activity: Moving forward to the Vote (can be completed as homework)

Working collaboratively or individually, students will research and create a comic panel(s) illustrating and explaining the:

The comic panel(s) must reference, in some way, Seneca Falls. Students will share out their comic with the class. If possible, project each student panel to share with the class.

Potential Image Sources for Reference: Hundreds of free source images are available on line that can be used for this project. Students should search:

Extension Activity (Grades Six and up)

Ask the students to examine each document’s “resolutions”. In what ways are the similar? If they have the same or similar purpose; what is the intent of the document? Why do they think Elizabeth Cady Stanton chose to frame the document in this way?

Assignment: Students will create a brief presentation—encourage creativity: comic panel, power point, or blog post addressing the topic: The Declaration of Sentiments: Independence for All.

Introduce a topic or text clearly, state an opinion, and create an organizational structure in which ideas are logically grouped to support the writer's purpose.

CCSS.ELA-LITERACY.W.5.1.B
Provide logically ordered reasons that are supported by facts and details.

CCSS.ELA-LITERACY.W.5.3.E
Provide a conclusion that follows from the narrated experiences or events.

D2.Civ.2.3-5. Explain how a democracy relies on people’s responsible participation, and draw implications for how individuals should participate

D2.His.3.3-5. Generate questions about individuals and groups who have shaped significant historical changes and continuities.

D2.His.4.3-5. Explain why individuals and groups during the same historical period differed in their perspectives.

D2.His.2.6-8. Classify series of historical events and developments as examples of change and/or continuity.

D2.Civ.8.6-8. Analyze ideas and principles contained in the founding documents of the United States, and explain how they influence the social and political system.

D2.His.3.6-8. Use questions generated about individuals and groups to analyze why they, and the developments they shaped, are seen as historically significant.

Anchor Standard 8.  Interpret intent and meaning in artistic work.\The student will communicate personal ideas, experiences, and narratives through the creation of works of art, using a variety of media.

The Timeless Tale of Tubman: A 200 Year Legacy

Economist Esther Duflo, along with research partners, were awarded the 2019 Nobel Prize in Economic Sciences for their work on global poverty issues. Duflo became the second woman to ever win the prize.
READ MORE
Biography

Mary Joan Nielubowicz was the only woman in the Navy Nurse Corps to earn the rank of Commodore and the first non-physician to earn the role of Deputy Commander for Health Care Operations in 1984.
READ MORE
.