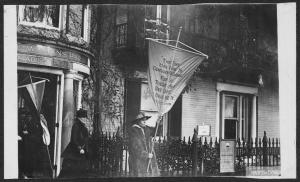 Students will be able to answer:

It is helpful if students have studied WWI so they can understand the context of the final push for suffrage and the messaging and strategy used by the National Woman's Party to pressure President Wilson.

Women of all classes risked their health, jobs, and reputations by continuing their protests. One historian estimated that approximately 2,000 women spent time on the picket lines between 1917 and 1919, and that 500 women were arrested, of whom 168 were actually jailed. The NWP made heroes of the suffrage prisoners, held ceremonies in their honor, and presented them with commemorative pins. Women went on publicity tours dressed in prison garb and talked about their experiences in prison in order to win public support for their cause.

Congressional Passage of 19th Amendment and Ratification Campaign Government officials found it increasingly difficult to refuse the vote to women who were contributing so much to the war effort. Anti-suffragist arguments about women’s mental and physical inferiority were difficult to sustain as women took over jobs vacated by men drafted into military service. In addition, the NWP’s militant tactics and the public support its members garnered from their imprisonment, combined with persistent, low-key lobbying by NAWSA, eventually forced President Wilson to endorse the 19th Amendment on January 9, 1918. The next day, it passed in the House of Representatives. Obstructionists from southern and eastern states delayed passage in the Senate until June 1919, during which time NWP members continued to lobby and protest. They established picket lines in front of the U.S. Capitol and the Senate Office Building in October 1918; started a watch fire campaign on January 1, 1919, in front of the White House to pressure President Wilson to lobby recalcitrant senators to pass the suffrage amendment; burned Wilson’s words and image in effigy; and sent suffrage prisoners on a cross-country speaking tour aboard a train named “Democracy Limited” in February and March 1919. On May 21, 1919, the U.S. House of Representatives again passed the Susan B. Anthony federal suffrage amendment, and on June 4, the U.S. Senate followed suit. The enactment of the amendment initiated a 14-month campaign for ratification by 36 states. During this time the NWP sent national organizers into key states to help local NWP members coordinate ratification efforts. Finally, on August 18, 1920, Tennessee became the 36th state to ratify the 19th

Once suffrage was achieved, the NWP regrouped and focused its attention on passing a federal Equal Rights Amendment (ERA), drafted by Alice Paul and first introduced in Congress in December 1923. The party withstood attacks from women’s groups who opposed the ERA as a threat to sex-based protective labor legislation and kept the issue alive for decades until the renewed ERA campaign in the 1970s.

Throughout the 20th century, the NWP remained a leading advocate of women’s political, social, and economic equality. In the 1920s, the NWP drafted more than 600 pieces of legislation in support of equal rights for women on the state and local levels, including bills covering divorce and custody rights, jury service, property rights, ability to enter into contracts, and the reinstatement of one’s maiden name after marriage.

Question 13 can be assigned for homework and submitted online or written by hand.

CCSS.ELA-LITERACY.RH.11-12.8
Evaluate an author's premises, claims, and evidence by corroborating or challenging them with other information.

CCSS.ELA-LITERACY.RH.11-12.9
Integrate information from diverse sources, both primary and secondary, into a coherent understanding of an idea or event, noting discrepancies among sources.

CCSS.ELA-LITERACY.RH.11-12.7
Integrate and evaluate multiple sources of information presented in diverse formats and media (e.g., visually, quantitatively, as well as in words) in order to address a question or solve a problem.

CCSS.ELA-LITERACY.RH.11-12.5
Analyze in detail how a complex primary source is structured, including how key sentences, paragraphs, and larger portions of the text contribute to the whole.