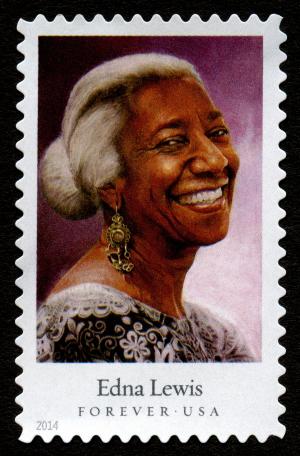 As an admired chef and cookbook author, Edna Lewis taught the American public to appreciate southern meals in a new way. Known as both the Grande Dame and Grande Doyenne of southern cooking, Lewis was among the first African American women from the south to write a cookbook that did not hide the author’s true name, gender or race. Combining her love of food preparation and her deep knowledge of African American history, Lewis’ legacy taught countless others the importance of traditional southern cuisine.

Edna Lewis was born in 1916 in Freetown, Orange County, Virginia. One of eight children, she lived with her family in a small community of emancipated slaves that her grandfather helped to create. Growing, foraging and harvesting their own food, most of the members of Freetown cultivated their own cooking ingredients. The Lewis family was certainly no exception. Lewis’ grandfather was granted a farm in Freetown where Edna participated in the production of food from an early age. Growing up in the early 20th century, modern cooking appliances were not accessible to her. However, Lewis inherited the creativity and resourcefulness that was central to African American food preparation. For example, without access to measuring spoons, baking powder was measured on coins to ensure the right amount was used in each dish. As Lewis learned to cook, she treasured the joy and community that was created around food and the many memories that were made.

After her father died, Lewis moved away from home at the age of sixteen. She moved to Washington, D.C. but quickly relocated to New York City and began working as a laundress. She was hired to iron clothes, but she had never ironed before and was fired after three hours. However, she was skilled at sewing and was able to find another job as a seamstress. She began making dresses for celebrities including Dorcas Avedon (the wife of photographer Richard Avedon) and Marilyn Monroe, while also becoming known for her African-inspired dresses. After marrying her husband Steve Kingston and working many jobs in the area, Lewis’ dream to be a chef became a reality. Along with her friend John Nicholson, Lewis opened and became the head chef of Café Nicholson in 1949. Located on the East Side of Manhattan, this French-inspired restaurant became a staple for artists and celebrities such as Marlon Brando, Tennessee Williams, Greta Garbo, Salvador Dali, and Eleanor Roosevelt. At this restaurant, she would often prepare her beloved southern dishes for her consumers.

After three years, Lewis left Café Nicholson but remained an active business partner. She became a lecturer for the American Museum of Natural History and built her brand as a chef and private caterer. As the demand for cookbooks and creative foods began to grow, Lewis decided to write her first cookbook. Although women chefs were few, and black women chefs were even fewer, Lewis sought to bring fresh and seasonal ingredients to American homes. Along with socialite Evangeline Peterson, Lewis wrote The Edna Lewis Cookbook in 1972. After suffering from a broken leg, Lewis had to take a break from cooking professionally and was introduced to famous cookbook editor Judith Jones. Jones, who also edited cookbooks for Julia Child, believed that Lewis’ cookbooks could be improved if they incorporated her distinct voice. Lewis began creating another cookbook with Jones that was full of her childhood stories, southern cultural traditions, and African American heritage. Entitled, The Taste of Country Cooking,  Lewis wrote about pure and fresh ingredients, annual Emancipation Day picnics, and the smells of celebratory meals. Published in 1976, her book started a wave of cookbooks released that celebrated the diversity of southern cuisine. A few years later, Lewis released her third cookbook called In Pursuit of Flavor in 1988.

Lewis spent much of her career cooking in the South but returned to New York City at the age of 72 to become a chef at the Brooklyn restaurant Gage & Tollner. However, in the early 1990s Lewis moved to Georgia and retired from restaurants. She received various awards and honors including: “Who’s Who in American Cooking,” by Cook’s Magazine, an honorary Ph.D. in Culinary Arts from Johnson & Wales University in 1996, the James Beard Living Legend Award in 1999, and was named “Grande Dame” by Les Dames d'Escoffier International in 1999. In Georgia, she became a mentor and companion to Scott Peacock, the southern cook who was the head chef at the Georgia governor’s mansion. Together, they wrote The Gift of Southern Cooking: Recipes and Revelations from Two Great American Cooks in 2003.

A few months before her 90th birthday, Dr. Edna Lewis passed away from cancer in 2006.

The Equal Rights Amendment (ERA), proposed in 1923, has never been ratified. Activists seeking gender equality have sought its ratification since its first proposal but have encountered resistance along the way.
READ MORE
Lesson Plan