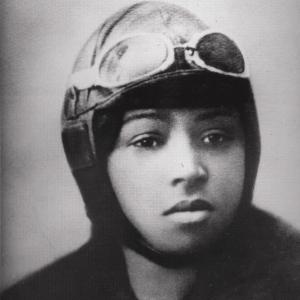 Bessie Coleman soared across the sky as the first African American, and the first Native American woman pilot. Known for performing flying tricks, Coleman’s nicknames were; “Brave Bessie,” “Queen Bess,” and “The Only Race Aviatrix in the World.” Her goal was to encourage women and African Americans to reach their dreams. Unfortunately, her career ended with a tragic plane crash, but her life continues to inspire people around the world.

Born in Atlanta, Texas on January 26, 1892, Bessie Coleman had twelve brothers and sisters. Her mother, Susan Coleman, was an African American maid, and her father George Coleman was a Native American sharecropper. In 1901, her father decided to move back to Oklahoma to try to escape discrimination. Bessie’s mother decided not to go with him. Instead, the rest of the family stayed in Waxahachie, Texas. Bessie grew up helping her mother pick cotton and wash laundry to earn extra money. By the time she was eighteen, she saved enough money to attend the Colored Agricultural and Normal University (now Langston University) in Langston, Oklahoma. She dropped out of college after only one semester because she could not afford to attend.

At age 23, Coleman went to live with her brothers in Chicago. She went to the Burnham School of Beauty Culture in 1915 and became a manicurist in a local barbershop. Meanwhile, her brothers served in the military during World War I and came home with stories from their time in France. Her brother John teased her because French women were allowed to learn how to fly airplanes and Bessie could not. This made Bessie want to become a pilot. She applied to many flight schools across the country, but no school would take her because she was both African American and a woman. Famous African American newspaper publisher, Robert Abbott told her to move to France where she could learn how to fly. She began taking French classes at night because her application to flight schools needed to be written in French.

Finally, Coleman was accepted at the Caudron Brothers' School of Aviation in Le Crotoy, France. She received her international pilot’s license on June 15, 1921 from the Fédération Aéronautique Internationale. Coleman’s dream was to own a plane and to open her own flight school. She gave speeches and showed films of her air tricks in churches, theaters, and schools to earn money. She refused to speak anywhere that was segregated or discriminated against African Americans. In 1922, she performed the first public flight by an African American woman. She was famous for doing “loop-the-loops” and making the shape of an “8” in an airplane. People were fascinated by her performances and she became more popular both in the United States and in Europe. She toured the country giving flight lessons, performing in flight shows, and she encouraged African Americans and women to learn how to fly.

Only two years into her flight career, Coleman survived her first major airplane accident. In February of 1923, her airplane engine suddenly stopped working and she crashed. She was badly hurt in the accident and suffered a broken leg, a few cracked ribs, and cuts on her face. Thankfully, Coleman was able to fully heal from her injuries. This accident did not stop her from flying. She went back to performing dangerous air tricks in 1925. Her hard work helped her to save up enough money to purchase her own plane, a Jenny – JN-4 with an OX-5 engine. Soon she returned to her hometown in Texas to perform for a large crowd. Because Texas was still segregated, the managers planned to create two separate entrances for African Americans and white people to get into the stadium. Coleman refused to perform unless there was only one gate for everyone to use. After many meetings, the managers agreed to have one gate, but people would still have to sit in segregated sections of the stadium. She agreed to perform and became famous for standing up for her beliefs.

On April 30, 1926, Bessie Coleman took a test flight with a mechanic named William Wills. Wills was piloting the plane, as Coleman sat in the passenger seat. At about 3,000 feet in the air, a loose wrench got stuck in the engine of the aircraft. Wills was no longer able to control the steering wheel and the plane flipped over. Unfortunately, Coleman was not wearing a seatbelt. Airplanes at the time did not have a roof or any protection. Coleman immediately fell out of the open plane and died. Wills crashed the aircraft a few feet away from Coleman’s body and also died. Her death was heartbreaking for thousands of people. Famous activist Ida B. Wells-Barnett performed the funeral service to honor Coleman in Chicago. In 1931, the Challenger Pilots’ Association of Chicago started a tradition of flying over Coleman’s grave every year. By 1977, African American women pilots formed the Bessie Coleman Aviators Club. In 1995, the “Bessie Coleman Stamp” was made to remember all of her accomplishments.

Feminist Philosophers of the 20th Century