Getting with the Program

American Women and the Invention of Computer Programming 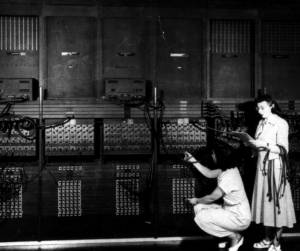 Related Exhibit
Getting with the Program
Description

Winning World War II consumed America in the early 1940s. The Home Front rallied to support the troops as well as the war effort. The war spurred rapid technological development, with women on the forefront. Thousands of women moved into technical positions created by the War Manpower Shortage. This lesson explores the women recruited to set up and program ENIAC, the world’s first electronic computer. Their logic skills and creative problem solving laid a foundation for today’s technological innovation.

This lesson combines science and history to introduce students to technology and innovation. They will learn about electrical circuits and apply that knowledge to computer functions. They will study how gendered job classifications, including computer and programmer, affected women’s work opportunities in the past and influence stereotypes in the present.

Hands on activities engage students the basic functions of a computer’s electrical system. They will learn about the mathematical problems that the first computer was developed to solve. Finally, they will explore how the World War II Home Front opened new opportunities for women in employment and innovation.

Vocabulary words are bolded in the Procedures, followed by their definitions

Project the exhibit onto the smart board and move through the slides, summarizing content for students.

Explain that prior to World War II (1941 to 1945), many women attended college and earned degrees in math and science. However, many women’s job opportunities were limited to “female” professions or entry level positions. School teachers, book keeper, and computer were all considered women’s jobs.

World War II created a demand for more workers in all fields. Not only did men leave jobs for military service, leaving vacancies to fill, the war created new jobs. Women were encouraged to move into the new jobs. One new job that needed to be filled was calculating ballistics trajectories for the Army’s Ordnance Division.

Step 2: Explain parabolas and how projectiles follow a parabolic arc

Advance through to the slide of women learning differential equations.

The Army bought new weapons to fight the war. Artillery are mounted projectile-firing guns or missile launchers, which may be either mobile or stationary. Artillery pieces are differentiated by barrel length and bore size. The different lengths and bore sizes determine the range and velocity of launched projectiles. The Ordnance Department of the Army was in charge of artillery. Private industry designed and manufactured new artillery to meet the demands for improved equipment and large numbers of new artillery pieces. The Ordnance Department did not know how its new artillery would perform in the field, including how far or how accurately a new model could launch its projectile. The Ordnance Department hired large numbers of women mathematicians, many of them former school teachers, to calculate firing tables for each weapon under different conditions. Artillery units used firing tables to aim artillery pieces to hit designated targets.

What is a parabolic curve?

A parabola is a curve where any point is at an equal distance from a fixed point (the focus), and a fixed straight line (the directrix). Launched objects move along a parabola. A thrown baseball arcs along a parabolic curve.

Draw an X,Y axis on the board and graph a parabola.

Set up a plastic cup pyramid. Have students cluster opposite the pyramid, behind the shooting line.

Have students take turns launching ping pong balls with the sling shot at the pyramid. Keep track of the launch angles to determine the role of angle of launch to reach the cups. Try setting up the slingshot from various distances to the pyramid to see how the arc changes with distance.

Ask students to describe the shape of the ping pong balls’ arcs. It is a parabolic curve. Brainstorm with students all of the factors that went into the launch.

Just for fun: Wave a paper fan at the sling shot during launch. Discuss whether wind affects the projectile’s pathway.

The Army Ordnance mathematicians calculated curves similar to the ping pong balls and recording them on tables.

Note that this is the same concept in the game Angry Birds.

Electricity is a form of energy. An electric circuit is a path for transmitting electric current through wires. The electric circuit includes a device such as a battery or generator that gives energy to the charged particles that make up the current. Devices along the pathway like lamps or motors use the electrical current to operate. A circuit must be closed for electricity to flow. Computers use electrical energy to operate as well as to perform operations.

Show students the holiday lights. The circuit consists of a long wire that begins and ends at the battery terminal. When flipped “on,” electricity flow through the circuit and lights the string. When the switch if “off,” electricity stops flowing. In some string, a missing or burned out light interrupts the electrical flow and the string does not turn on. This is the equivalent to a switch being “off”.

Like a holiday light string, a computer operates when electricity flows through its internal circuits.

Step 5: Demonstrate that electricity flowing along a long pathway  needs boosters to maintain the flow.

Student #1 pumping the rope creates a wave. The student generates the power that transmits energy along the rope similarly to electricity flowing along a circuit. If you use a long enough rope, the wave will peter out before it reaches the second student. Pumping the rope more energetically may transmit waves to the end of the line, using more energy, but it will do so less efficiently and with larger wave forms.

Electricity moving along a long circuit needs to be boosted. For example, power moving through power lines from the generating plant to the school is periodically boosted or it would never reach the school!

Position student #3 between student #1 and #2. After #1 begins to pump, #3 should “boost” the wave by both holding and shaking the rope.

Add a fourth or fifth student along the line to demonstrate that adding relays maintains a constant wave flow. Notice that adding “boosters” means that student #1, the originator, does not need to work as hard to create a continuous wave as he/she did without the boosters.

Step 6: Discuss the development of the ENIAC

Navigate to the slide titled “Birth of Electronic Computing”. Explain that the ENIAC was the world’s first electronic, digital, general-purpose computer. Though it was under development before World War II, the Ordnance department contracted with the designers to further develop it for the Army. Its job was to take over calculating the firing tables. (Interesting aside, it was also used to calculate equations for the Manhattan Project.)

Move through this section of slides to explain that the computer was a series of machines that were hard-wired together. The wiring paths made an electrical circuit. As electrical pulses traveled along the circuit, the computer “counted” them, which was how it solved equations.

Remember the “boosters” along the rope line? Those extra students moving the rope were the human equivalent of vacuum tubes. A vacuum tube is an electron tube containing a near-vacuum that allows the free passage of electric current. There was so much wiring inside the ENIAC that it required almost 18,000 vacuum tubes to operate.

Today, program language tells a computer what to do. The ENIAC did not have internal memory. The physical wiring served as the programming. The operators rewired the computer to solve every new equation. This problem was solved in later computer hardware design by the addition of memory, which allows for stored programs to run. The stored program tells the computer to run electrical pulses through particular circuits.

It’s like each problem had to run through its own maze!

Explain that large, room-sized computers were standard until the 1980s. Because the first computer programmers were women, programming computers was a common job for women for decades. Women that they may have heard of like Grace Hopper and Dorothy Vaughn (Hidden Figures) built careers as programmers. In fact, 30% of computer program majors in college were women up until the late 1980s.

When the personal computer was introduced in the late 1970s, the image of a computer programmer changed. Movies and television shows created a stereotype of a young, white, male, isolated and socially awkward “geek” writing computer programs. Today, that stereotype still pervades, and only 20% of computer science majors are women.

These articles discuss the trend in 1980s advertising positioning computers for boys. Consider assigning one or more as homework to 6th grade and higher!

Radio Shack introduced affordable, personal computers to the home market. Students may enjoy searching for and viewing vintage 1980s Radio Shack ads on YouTube. Ask them to write about or discuss the marketing messages in old computer ads.

7th and 8th grade students may have their own ideas as to why there are more men in computer science than women. Ask them to share! Perhaps students know someone who works in computer programming. They may conduct a personal interview or invite the programmer to speak to the class.

Discuss with students what a stereotype is and why that might discourage people who do not fit the stereotype from pursuing computer science.

See suggested Homework in Step 7 for 7th and 8th grade.

CCSS.ELA-Literacy.RST.6-8.4
Determine the meaning of symbols, key terms, and other domain-specific words and phrases as they are used in a specific scientific or technical context relevant to grades 6-8 texts and topics.

CCSS.ELA-Literacy.RST.6-8.9
Compare and contrast the information gained from experiments, simulations, video, or multimedia sources with that gained from reading a text on the same topic.

Economist Esther Duflo, along with research partners, were awarded the 2019 Nobel Prize in Economic Sciences for their work on global poverty issues. Duflo became the second woman to ever win the prize.
READ MORE
Biography