A Short History of Activism 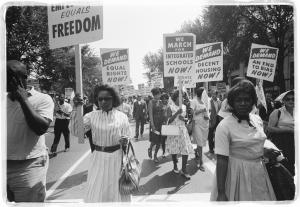 Subjugation, inequality, revolution and protest have marked world history for thousands of years. And for thousands of years, human beings have fought oppression and subjugation – both violently and peacefully. History gives us examples of campaigns that both changed the geopolitical landscape to those that although unsuccessful, highlighted oppression. Spartacus’ uprising, the Protestant Reformation, the Boston Tea Party, the Haitian Revolution, the Storming of the Bastille, Nat Turner’s Rebellion, the Hungarian Revolution, Gandhi’s Salt March, the Stonewall Riots, Vietnam war protests, Tiananmen Square, the anti- Apartheid movement are just a few examples of struggles throughout history that represent the human need to make their own choices, to be free from oppression in all forms as well as to be given a voice.

In the United States, peaceful activism has, for the large part, been the foundation of protest. And the primary focus of protest for almost 200 years was the oppression of rights for millions of people of color held in slavery and later denied equal rights; and the secondary status allowed to women. Coverture was legal in most states. This legal status meant that women could not vote, they could not own property and, by law, her assets were controlled by her husband. If divorced, the husband automatically was given custody of her children. While many women were teachers, other professions were closed to them until well into the 19th century. In most states, for example, women could not practice law. There was no recourse because women were disenfranchised citizens who did not have the legal right to vote. Although women began agitating as early as the 1770s, it was not until 1848, the Women’s Suffrage Movement began in Seneca Falls, NY. For the next 72 years, until the ratification of the 19th Amendment in August 1920, women actively protested for suffrage.

Many of the early suffragists were also ardent abolitionists. Despite the ratification of the 14th, 15th, and 19th Amendments, African American men and women were often denied the rights guaranteed to them by law. In the late 1950s into the 1960s, the Civil Rights movement characterized by peaceful protest and activism addressed the long overdue enforcement of laws.

In the 1960s women activists not only marched in support of Civil Rights, they once again fought for women’s rights as they loudly advocated for passage of the Equal Rights Amendment. Across the nation farm workers protested under the guidance of Dolores Huerta and the UFWA. Protests against the Vietnam War were supported by both young women and men across the nation and became another defining mark of the 1960s—a decade of activism, protest, and change.

Today we see the echo of protest for change in such groups as Black Lives Matter, #Metoo, and the struggle for LGBTQ rights. Like activists for the last two centuries in America they seek respect through protest.