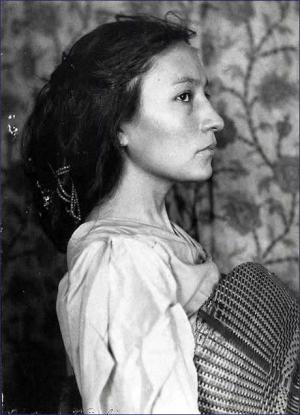 Zitkála-Šá (“Red Bird”), also known as Gertrude Simmons Bonnin, was a Native American musician, writer and activist who fought for women's suffrage and Indigenous voting rights in the early 20th century. Her writings and activism led to citizenship and voting rights for not only women, but all Indigenous people.

Zitkála-Šá was born on the Yankton Indian Reservation in South Dakota on February 22, 1876, the same year that the Lakota, Cheyenne and Arapaho peoples defeated the U.S. Army under the command of General Custer at the Battle of the Little Big Horn. She was a member of the Yankton Sioux (or Dakota) Nation. Her mother, “Reaches for the Wind” or Ellen Simmons, was of Sioux Dakota heritage and her father was of French descent. After her father abandoned the family, Zitkála-Šá was raised by her mother and aunts. At the age of eight, missionaries from the White’s Manual Labor Institute came to the reservation to recruit children for their boarding school. Zitkála-Šá’s mother was hesitant to send her, but Zitkála-Šá was eager to attend and convinced her mother. Zitkála-Šá attended the Quaker-run boarding school in Wabash, Indiana. Zitkála-Šá’s time at the school was traumatic. These boarding schools were part of a larger attempt to assimilate Indigenous people into the United States while erasing Native traditions and culture. One of these methods was forcibly sending Native children to white run boarding schools and outlawing the practice of Indigenous cultural and religious traditions. While the missionary school taught her English literacy, Zitkála-Šá was beaten and punished for speaking her tribal language or practicing her Sioux culture.

Zitkála-Šá graduated from White’s Manual Labor Institute and enrolled in a teacher training program at Earlham College, where she was one of the few Indigenous students, before transferring to The New England Conservatory of Music to study violin. At the Paris Exposition in 1900, she performed a violin solo with the Carlisle Indian Band. Later in 1913, she worked with a composer to write the opera, Sundance, that utilized traditional Yankton rituals, dance, and melodies. It premiered in Utah and was performed by rural troupes before being performed in 1938 by the New York Light Opera Guild. While studying music in Boston, she began to work on her writings. She wrote autobiographical essays and short stories under her Sioux name “Zitkála-Šá” meaning “Red Bird” in the Yankton language. Her works were printed in publications such as Atlantic Monthly and Harper’s Weekly. Her first book, Old Indian Legends, was significant because it translated many Sioux myths to English to preserve for future generations.

By 1900, Zitkála-Šá was teaching music and speech at the Carlisle Indian Industrial School in Carlisle, Pennsylvania. She believed the administration at the school patronized Native students by offering a limited vocational instruction instead of more academic subjects. She left the position within two years, unable to work for an institution which reminded her of her own traumatic experience as a child. She continued to write about her experiences and frustrations. Her writings, such as American Indian Stories (1921) and Oklahoma’s Poor Rich Indians (1927), focused on Dakota history and culture, corruption of the United States government at the expense of Native people, and the trauma and terror experienced by Indigenous children who were separated from their families and culture in these boarding schools. Other of her essays and short stories appeared in national magazines such as the Atlantic Monthly and Harper’s Monthly.

After leaving Carlisle, Zitkála-Šá returned to home on the reservation and began to work for the Bureau of Indian Affairs (BIA) at Standing Rock Indian Reservation as a clerk while continuing to write. In 1902, she published an article in Atlantic Monthly (now The Atlantic) called “Why I am a Pagan,” in which she wrote about her traditional beliefs to counter the trend of Native converting and assimilating to Christianity. As she wrote and worked for the BIA, she met and in 1902 married Captain Raymond Talephause Bonnin, who was also of Yankton Sioux ancestry. When Bonin was assigned to be superintendent of the Uintah and Ouray Reservation Agency, the couple moved to Utah. The couple lived and worked on the reservation for 14 years and had a son, Raymond Ohiya Bonin. While on the reservation, Zitkála-Šá witnessed white employees of the Reservation Agency treating Uintah and Ouray peoples with extreme prejudice. Her observations influenced her critique of the federal policy involving Native Americans. She believed the reservation system was corrupt, offered limited employment opportunities, and was ultimately under the control of white Americans, meaning Native Americans were left without the power to make their own choices.

In 1911, she joined the Society of American Indians (SAI), an organization founded for and by Native Americans to challenge the wardship status of Native Americans and their lack of U.S. citizenship. Zitkála-Šá was one of many women in the SAI who advocated for women’s suffrage and in 1917 she became the secretary of the SAI and moved to Washington, D.C. Here, she became a visible part of the Women’s Suffrage Movement and spoke at the National Women’s Party headquarters in 1918. Zitkála-Šá’s beliefs about women’s equality were influenced by the strong women in her family, her culture, and her experience in Quakers schools.

She educated her audiences about the injustices being carried out against Indigenous peoples and nations in the United States. She pointed out to her readers that the federal government had power over a people left without a say in how their land or money was managed. She pointed to the irony that the “First Americans” lacked a political voice and urged the public to enfranchise Native Americans – both women and men.

In August 1920, the Nineteenth Amendment was ratified, taking away sex as a barrier to voting for citizens. However, at least one third of Native adults lacked U.S. citizenship and therefore still could not vote. Zitkála-Šá continued her fight for Native American citizenship and suffrage, urging American women who now had the vote to help support an Indian citizenship bill. She traveled around the U.S., calling on white women to use their newly won suffrage rights to enfranchise Native peoples. In 1924, in part due to Zitkála-Šá’s advocacy, Congress passed the Indian Citizenship Act that endowed full citizenship rights to all native-born people in the country.

In 1926, Zitkála-Šá and her husband formed the National Council of American Indians to connect the political activism of Natives across the country. They traveled, heard concerns, discussed policy and legislation, and registered voters. As some states began to adopt strategies similar to Jim Crow laws to disenfranchise Native people, Zitkála-Šá kept advocating for Native rights, suffrage, and self-governance until her death on January 26, 1938. She was buried at Arlington National Cemetery next to and sharing a headstone with her husband.

Zitkála-Šá was one of the most important reformers of the 20th century. She helped empower Indigenous people by writing about their culture, history, personal experience, and concerns. Her writings forced the audience to face the complexities and beauty of Indigenous culture and the tragedy of the Native experience in America. And her activism influenced change that advocated for citizenship rights, better educational opportunities, improved health care and cultural recognition and preservation for Native Americans.