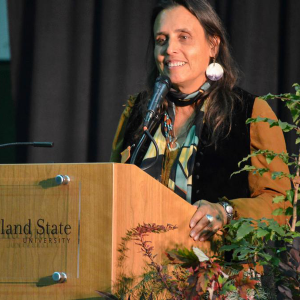 Winona LaDuke, a Native American activist, economist, and author, has devoted her life to advocating for Indigenous control of their homelands, natural resources, and cultural practices. She combines economic and environmental approaches in her efforts to create a thriving and sustainable community for her own White Earth reservation and Indigenous populations across the country.

Winona LaDuke was born in Los Angeles, California on August 18, 1959 to parents Vincent and Betty (Bernstein) LaDuke. Her father, also known as Sun Bear, was Anishinaabe (or Ojibwe) from the White Earth Reservation in Minnesota. He was an actor, writer, and activist. Her mother was an artist and activist. LaDuke is an Anishinaabekwe (Ojibwe) enrolled member of the Mississippi Band Anishinaabeg. Her father brought her to powwows and other tribal functions, events that made a deep impression on the young LaDuke. LaDuke’s parents divorced when she was five and she moved with her mother, who was of Russian Jewish descent, to Ashland, Oregon. LaDuke visited White Earth frequently and, at her mother’s encouragement, spent summers living in Native communities in order to strengthen her connection with her heritage.

LaDuke attended Harvard University and graduated in 1982 with a degree in rural economic development. While at Harvard, LaDuke’s interest in Native issues grew. She spent a summer working on a campaign to stop uranium mining on Navajo land in Nevada, and testified before the United Nations in Geneva, Switzerland about the exploitation of Indian lands.

After Harvard, LaDuke took a position as principal of the reservation high school at the White Earth Ojibwe reservation in Minnesota. She soon became involved in a lawsuit filed by the Anishinaabeg people to recover lands promised to them by an 1867 federal treaty. At the time of the treaty, the White Earth Reservation included 837,000 acres, but government policies allowed lumber companies and other non-Native groups to take over more than 90 percent of the land by 1934. After four years of litigation, however, the lawsuit was dismissed.

The lawsuit’s failure motivated LaDuke’s ensuing efforts to protect Native lands. In 1985, she helped establish and co-chaired the Indigenous Women’s Network (IWN), a coalition of 400 Native women activists and groups dedicated to bolstering the visibility of Native women and empowering them to take active roles in tribal politics and culture. The coalition strives both to preserve Indigenous religious and cultural practices and to recover Indigenous lands and conserve their natural resources.

In 1989, LaDuke completed a master’s degree in community economic development at Antioch University. That same year, she founded the White Earth Land Recovery Project (WELRP), using funds the Reebok Foundation awarded her for her human rights work. WELRP is an organization that seeks to buy back reservation land previously purchased by non-Native people to foster sustainable development and provide economic opportunity for the Native population. It is now one of the largest reservation-based nonprofits in the country.

WELRP’s sustainable development initiatives include renewable energy efforts, indigenous farming and local food systems, and improved sanitation measures. They use the land they buy to generate wind energy; they have helped protect the local wild rice crop from patenting and genetic engineering; they encourage the consumption of traditional foods to combat rising rates of Type 2 diabetes in the community; and they run a diaper service that saves money and alleviates waste from disposable diapers. The organization raises money through the sale of traditional crafts, jewelry, and food to fund these programs.

Though busy with the WELRP, LaDuke continued her advocacy work with the Indigenous Women’s Network. In the early 1990s, LaDuke arranged a national concert series with the musical group Indigo Girls to raise awareness among young people about Native issues. In 1993, LaDuke and the Indigo Girls co-founded Honor the Earth, an advocacy and fundraising group that works on behalf of Native environmental organizations. Honor the Earth has granted over two million dollars to more than 200 Native American communities since its founding.

In 1996 and 2000, LaDuke served as Ralph Nader’s running mate on the Green Party presidential ticket. The Green Party describes itself as an independent party that emphasizes grassroots democracy and the ecological health of the planet. LaDuke’s ticket won 0.7 percent of the vote in 1996 and 2.7 percent in 2000. LaDuke returned to electoral politics in 2016 when she ran for chair of the White Earth tribal council, though her bid was unsuccessful.

LaDuke has received many honors for advocacy work. In 1994, Time magazine named her one of the Fifty Leaders for the Future. In 1998, Ms. Magazine named her one of their Women of the Year. In 2015, she received an honorary doctorate from Minnesota’s Augsburg College and in 2017, LaDuke won the University of California’s Alice and Clifford Spendlove Prize in Social Justice, Diplomacy and Tolerance.

LaDuke stepped down as the executive director of the White Earth Land Recovery Project in 2014, but continues to fight for Native Americans’ environmental interests. She was a leader at the 2016 Dakota Access Pipeline protests that sought to protect water access and sacred Indigenous lands in North Dakota. Today, the mother of six grown children (three biological and three adopted) devotes much of her time to farming. Located on the White Earth reservation, her farm grows heritage vegetables and hemp. LaDuke tries to publicize hemp’s environmental advantages: it requires less water to grow than cotton; can replace petroleum-based synthetics in clothing and other products; and absorbs carbon from the atmosphere, rather than releasing it. Winona’s Hemp & Heritage Farm is her latest endeavor; a farm and nonprofit agency, its mission is to create an Indigenous women-led economy based on local food, energy, and fiber, that is kind to the Earth.

“Who We Are.” Winona’s Hemp and Heritage Farm. Accessed March 30, 2021. https://www.winonashemp.com/who-we-are