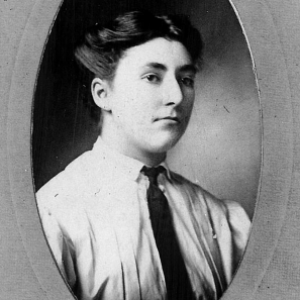 During the Rape of Nanking (1937-38), the Chinese women refugees under Minnie Vautrin’s protection gratefully addressed her this way.

Minnie Vautrin was born on September 27, 1886 to a blacksmith's family in the tiny village of Secor, Illinois. From early on, she dreamt of becoming a teacher and seeing the outside world. However, her family could not afford her schooling. She realized that if she wanted to be educated, she must make her own way. And she did.

In 1912, Vautrin joined the Foreign Christian Missionary Society after graduating from the University of Illinois-Urbana. The Society sent her to Hofei, China. In Hofei, she saw that poverty was prevalent and most of the Chinese women were illiterate. She was determined to devote her life to helping the poor and promoting women's education. After months of effort, she established a girls' middle school there. For recruiting students, she tactfully rectified the parents' old belief that it was a total waste to educate their daughters. Later, in 1919, after receiving a Master's degree from Columbia University during her furlough back to America, Vautrin became the acting president of Ginling College in Nanking. At Ginling, she strived to promote women's education and help the poor.  She led her students to establish a free clinic and elementary school for poor neighbors. On weekends she often visited the poor and helped them solve their problems. They affectionately called her their Miss Hua (from her Chinese name-Hua Chuan).

In July of 1937, Japan launched a full-scale war against China. Four months later, the Japanese army marched towards Nanking. Most people left the city. Only the poor could not afford to leave. Vautrin repeatedly defied the American Embassy's order to evacuate because she had decided to remain in Nanking to help the poor. Meanwhile, a group of Western gentlemen established a safety zone with some twenty camps to protect refugees in Nanking. Vautrin turned Ginling into a special camp for women and children. She protected the campus with American flags and proclamations, issued by the American Embassy, to show the Japanese soldiers that Ginling was an American institute and deter them from entering the college.

However, on December 13, Nanking fell. The Japanese soldiers immediately went on a rampage of committing despicable crimes. They savagely gang-raped women and tortured victims to death.

Thousands of women poured into Ginling and the campus was soon overcrowded with refugees. Vautrin had to stand at the college's front gate to urge the older women to return home and leave room for Ginling to protect the younger ones. But, most of them refused to leave. They kneeled on the ground, tearfully begging to be admitted into the campus. Seeing the sad scene, Vautrin let all of them in. At the zenith of the Japanese atrocity, the small women's college was crowded with over 10,000 women and children.

Vautrin soon discovered that the American flags and proclamations posted around Ginling could not prevent the Japanese soldiers from barging into the campus and only the presence of a foreigner would deter them from committing crimes. She spent her day and night rushing to wherever the soldiers intruded on the campus to keep them out. Some of them became so angry that they slapped her face. They threatened her with their bloodstained bayonets. One night, they demanded that she leave the campus. She replied, "This is my home. I cannot leave".

In addition, Vautrin cared for the refugees' well-being. For instance, she made arrangements to serve them rice-porridge, teach them to sing hymns to lift their spirit and she even tried to locate their missing husbands and sons, who were their families' sole breadwinners. The grateful refugees called her "Goddess of Mercy".

Nevertheless, the terrible strain of dealing with Japanese soldiers exhausted her physically and mentally. Shortages of basic necessities and nutritious food in the impoverished Nanking were also detrimental to her health. In May 1940, she suffered a nervous breakdown and had to return to America for medical treatment. At the time, mental illness was regarded as a stigma in society. Her colleagues kept a tight lip on what happened to her.

A year later, on May 14, 1941, while alone in a friend's apartment in Indianapolis, she ended her own life. She was only 55 years old. She left a note saying that her life was a "failure". She was the Chinese people's "Goddess of Mercy".