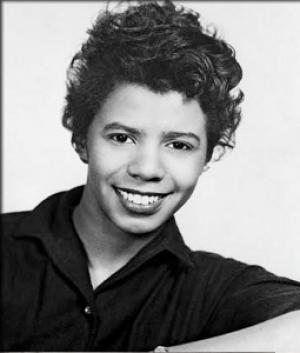 In 1959, Lorraine Hansberry made history as the first African American woman to have a show produced on Broadway—A Raisin in the Sun. As a playwright, feminist, and racial justice activist, Hansberry never shied away from tough topics during her short and extraordinary life.

Lorraine Hansberry was born on May 19, 1930 at Provident Hospital on the South Side of Chicago. She was raised in a strong family, the youngest of three children born to Nannie Perry Hansberry and Carl Augustus Hansberry. Her father, Carl, founded Lake Street Bank, one of the first banks for African Americans in Chicago and also ran a successful real estate business. Her mother, Nannie, was a school teacher. Hansberry had other African American leaders in her family: her uncle William Leo Hansberry was a Professor of History at Howard University; her cousin, Shauneille Perry, was one of the first African American women to direct off-Broadway. Hansberry’s father died of a cerebral hemorrhage when she was 15.

Growing up on the South Side of Chicago, Hansberry and her family were involved in the racial justice movements of the era. Her parents were prominent members of the African American community and her father worked for the NAACP. When prominent African American community members and leaders came through Chicago, they went to the Hansberry’s home. The family hosted W.E.B. DuBois, Paul Robeson, Langston Hughes, Duke Ellington, and Jesse Owens.

In 1937, Hansberry’s parents challenged Chicago’s restrictive housing covenants by moving into an all-white neighborhood. Their new white neighbors did not welcome the move and a mob gathered around the house. Someone threw a brick through the window, barely missing eight-year-old Hansberry’s head. Years later, Hansberry recalled her mother “patrolling the house all night with a loaded German luger.” When the Supreme Court of Illinois upheld the legality of the neighborhood’s restrictive covenant and forced the Hansberrys to leave the house, her parents sued. They took their case all the way to the Supreme Court. They won. Hansberry v. Lee (1940) helped outlaw legal housing discrimination across the United States.

Hansberry graduated from Englewood High School in 1948 and enrolled at the University of Wisconsin-Madison. While studying, Hansberry became interested in theater, politics, and the global anti-colonial movement. She worked on the 1948 presidential campaign for the Progressive Party, wrote in support of the Mau Mau uprising in Kenya, and covered the case of an African American man executed after an all-white jury deliberated his case for three minutes. Hansberry left university before completing her degree. She studied painting in Chicago and Mexico before moving to New York in 1950 to take courses at the New School. By 1951, she was writing for Paul Robeson’s Freedom, a progressive publication that put her in touch with other literary and political mentors. She also studied with W.E.B. DuBois. Many of her mentors were attacked for being Communists, but Hansberry escaped this persecution because she was relatively unknown.

During a protest against racial discrimination at New York University, Hansberry met Robert Nemiroff on the picket line. Nemiroff, a white, Jewish writer, shared many of Hansberry’s political views. Shortly after meeting, the two married on June 20, 1953 at the Hansberry’s home in Chicago. When Hansberry married, interracial marriage was still illegal in many states. Malcolm X rebuked Hansberry publicly for her interracial marriage. He later apologized for the attack. Hansberry and Nemiroff ended their romantic relationship after nine years, but he remained her best friend and closest confidant for the rest of her life. Despite her marriage to a man, Hansberry identified as a lesbian but she was not “out” in the traditional sense, as homosexuality was illegal in New York City at the time.

In 1956, Nemiroff co-wrote a hit song, “Cindy, Oh Cindy.” The profits allowed Hansberry to quit working at Freedom and devote her time exclusively to writing on her own. Inspired by her childhood and her love of theater, she started writing a play. Initially called The Crystal Stair, she later retitled it A Raisin in the Sun, a phrase taken from Langston Hughes’s poem, “Harlem: A Dream Deferred.” Raisin drew upon the lives of working-class African Americans who rented houses from her father and who Hansberry went to school with on the South Side. She turned to family members for inspiration for other characters.

Many expected A Raisin in the Sun to flop when it came to Broadway. Instead, it ran for 19 months, was made into a 1961 movie starring Sidney Poitier, and is now considered a classic theater piece. The play was nominated for four Tony Awards and won the New York Drama Critics’ Circle award for best play in 1959. Most importantly, Raisin brought African Americans to the theater as audiences and gave them representation on the stage.

Hansberry was not done. She wrote another play, The Sign in Sidney Brunstein’s Window, inspired by her marriage to Nemiroff. The play ran for 101 performances and dealt with themes of race, gender, and sexuality. The Sign would be the second and final Hansberry play produced during her lifetime. On January 12, 1965, Hansberry died of pancreatic cancer at 34. The Sign closed the same day.

At her funeral, held at the Church of the Master near Harlem’s Morningside Park, some 700 mourners filled the church. It was standing room only. Posthumously, another of Hansberry’s plays, Les Blancs, received their Broadway debut in 1970. Nemiroff also put the finishing touches on some of Hansberry’s incomplete plays, including The Drinking Gourd and What Use Are Flowers?

Raisin made the theater a place where African American stories and presence were welcome. Hansberry’s success opened the doors for and inspired generations of African American artists. Her commitment to racial justice inspired countless more.