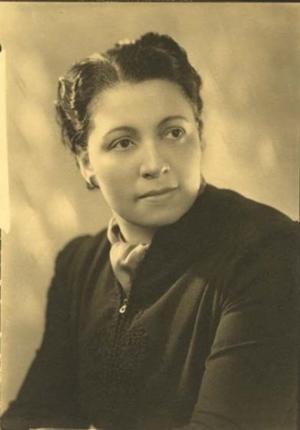 The founder of the Mississippi Health Project and the Southeast Neighborhood House, Dr. Dorothy Ferebee provided healthcare to the most vulnerable members of the African American community. She advocated for public health, civil rights, and women’s rights in her roles as president of the National Council of Negro Women, an international delegate for the U.S. government, and a pioneering obstetrician.

Dorothy Boulding Ferebee was born on October 10, 1898 to a prominent African American family in Norfolk, Virginia. Her maternal grandfather, Richard Gault Leslie Paige, was born a slave but became a wealthy businessman and a member of the Virginia state legislature. Her father, Benjamin Richard Boulding, worked as a superintendent for the U.S. Railway Mail Service, and her mother, Florence Cornelia Paige, was a clubwoman. Her extended family included lawyers, businessmen, and politicians, but from an early age Ferebee wanted to become a doctor. Her mother and aunt encouraged her to believe in her abilities and to pursue her dream of medicine.

Ferebee grew up in Norfolk but also lived with family members in Boston, likely due in part to the greater educational opportunities there. Ferebee graduated with honors from Simmons College in 1920 and enrolled in Tufts University College of Medicine, graduating in 1924. In Ferebee’s medical school class of 137 students, there were only five women. While all the female medical students faced poor treatment because of their sex, Ferebee experienced even harsher treatment as an African American woman. Still, Ferebee graduated among the top five students in her class.

Despite her high marks in medical school, Ferebee struggled to find a residency position as the applications required a photograph and no white-run hospital would accept her due to her race. Finally, Freedmen’s Hospital, a Black-run hospital in Washington, D.C. that would later become part of Howard University, accepted her. In 1927, Ferebee was one of nine women to pass the District of Columbia medical exam. She then worked at Freedmen’s Hospital as an obstetrician, where she began promoting contraception and sex education for women, controversial topics at the time. In 1930, Ferebee married Claude Thurston Ferebee, a dentist whom she met at Freedmen’s Hospital. The couple had twins, Dorothy, Jr. and Thurston, the following year.

While on ambulance duty in Washington, D.C., Ferebee recognized the need for social services and medical care for the city’s African American community. She founded the Southeast Neighborhood House in 1929, which provided medical care, day care, and recreational opportunities for local residents.

Ferebee was a member of the African American sorority Alpha Kappa Alpha (AKA), and with their sponsorship she directed the Mississippi Health Project from 1935-1942. Each summer, Ferebee and other sorority volunteers traveled to the Mississippi Delta to offer medical exams, vaccinations, and health education to Black sharecroppers and their families. It was dangerous and difficult work for these women to travel through the Jim Crow South, but Ferebee and her fellow volunteers knew it needed to be done. The project immunized approximately 15,000 children against smallpox and diphtheria. The U.S. Public Health Service praised the Mississippi Health Project as one of the most effective volunteer public health campaigns in history and First Lady Eleanor Roosevelt invited Ferebee to the White House. Ferebee served as the head of the sorority from 1939-1941, during which time she publicized the project through a slate of public lectures and a CBS radio broadcast. Ferebee earned a national reputation as a prominent physician, public health advocate, and activist during these years.

Ferebee began working with the National Council of Negro Women (NCNW), an umbrella organization representing thousands of African American women, and befriended NCNW founder and president Mary McLeod Bethune. She accompanied Bethune to the historic 1945 United Nations Conference in San Francisco. In 1949, Ferebee succeeded Bethune as the second president of the NCNW. Ferebee bolstered the NCNW’s efforts to promote healthcare education, and continued its work to end discrimination against African Americans and women in the military, housing, employment, and voting. As president, she issued her “Nine Point Program” that outlined a plan to achieve fundamental civil rights through educational and legislative initiatives. Through all these efforts, Ferebee continued her full-time work in obstetrics.

Ferebee suffered a personal tragedy when her 18-year-old daughter passed away in 1950. Soon after, she and her husband divorced. He had come to resent her prominent and successful career and asked her to step back from her work, but she refused.

Ferebee advocated for healthcare and civil rights as a member of many national and international organizations, a reflection of her commitment to a collective and inclusive approach to social reform. She served on the boards of the White House’s Children and Youth Council and the United Nations Children’s Fund (UNICEF). The U.S. State Department selected her as a delegate to the International Council of Women of the World in Greece in 1951. The Department of Labor’s Women’s Bureau named her to a delegation that observed the impact of postwar conditions on women and children in Germany. In 1963, she traveled to Selma, Alabama as part of an effort to register African Americans to vote and spoke on behalf of women’s rights. President Lyndon B. Johnson appointed her as one of five U.S. delegates to the World Health Organization’s twentieth assembly in Geneva, Switzerland in 1967. That same year, the mayor of Washington, D.C., Walter Washington, named her to the D.C. Commission on the Status of Women, which she chaired from 1971-1974.

In addition to these many appointments, Ferebee served on the national boards for the Young Women’s Christian Association (YWCA) and the Girl Scouts of America. Simmons College awarded Ferebee its first Distinguished Alumna Award in 1959.

Ferebee passed away from congestive heart failure on September 14, 1980. In an editorial published shortly after her death, the Washington Post said of Ferebee, “it took more than a little courage to break down the barriers of sex and color. Dorothy Ferebee...knew how to do so, with a marvelous blend of compassion, cussedness and class.”