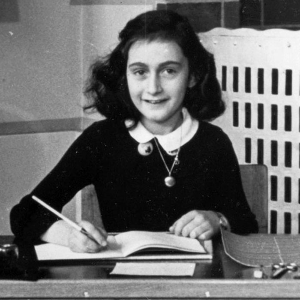 When she was growing up, Anne Frank wanted to be a writer or a journalist. Unfortunately, her life was cut short by antisemitic persecution during the Holocaust. Although she was unable to witness it, Anne Frank’s writing in her diary became one of the most recognized accounts of life for a Jewish family in Europe during World War II.

Annelies Marie Frank was born on June 12, 1929, in Frankfurt, Germany. She lived with her older sister Margot and her parents Otto and Edith Frank. In 1933, when Anne was about five years old, Adolf Hitler and the anti-Jewish National Socialist Party seized power. The Franks decided to flee to Amsterdam in the Netherlands in hopes of a better life. While her father left first to make arrangements, Anne Frank stayed with her grandparents in Aachen, Germany until February of 1934 when she joined the rest of her family in Amsterdam. Frank quickly acclimated to her new home and began attending a Dutch school nearby. Although Frank and her family enjoyed the safety of the Netherlands, this all changed when Nazi Germany invaded Poland in 1939 and the Second World War began. Less than a year later, Nazis invaded the Netherlands. The Dutch army quickly surrendered, and the Nazi army began enforcing new laws restricting Jewish mobility. Jewish people were no longer allowed to visit non-Jewish places of business and Jewish children had to attend separate Jewish schools. Soon after, all Jews had to start wearing a Star of David on their clothes for identification.

By the summer of 1942, Jewish people in the Netherlands started receiving calls and notices to report to “work” at camp Westerbork near the German border. Many of them were unaware that Nazi officials were then transporting them to the two major Jewish killing centers, Auschwitz-Birkenau and Sobibor. On July 5, 1942, Frank’s sister Margot received a call to report to a labor camp in Germany. Suspicious of the call and fearing for their lives, the Franks decided to go into hiding instead of reporting to the camp. The very next day, the entire family began hiding in the annex behind the office the family owned at Prinsengracht 263. The family soon welcomed four Dutch Jews into the secret attic apartment to escape persecution. The group hid in the “Secret Annex” for two years, while their friends smuggled food and clothing to help keep them safe. Right before they went into hiding, Frank received a diary for her thirteenth birthday. While she was in hiding with her family, she began recording her experiences, thoughts, and feelings in her diary. She also wrote short stories and started a novel about her life.

Unfortunately, on August 4, 1944 the family’s hiding place was discovered by the Gestapo (German Secret State Police). The Franks and their four companions were arrested, along with two of the people that helped them hide. They were all sent to camp Westerbork on August 8, 1944 and prepared for transport. On September 4, 1944 they were placed on a train with 1,019 other Jews and transported to Auschwitz in Poland. Once they arrived, the men and women were separated, and Frank and her sister Margot were selected for manual labor because of their age. Over 350 of the people that arrived in the transport with the Franks were immediately taken to the gas chambers and murdered. In late October of 1944, Anne and her sister Margot were transported to another concentration camp in northern Germany called Bergen-Belsen. The living conditions at this camp were also horrific, and many died from starvation or disease. Anne and Margot both contracted typhus and died in March of 1945, a few weeks before the British army liberated the camp on April 15. Their mother Edith also died in early January 1945 in the Auschwitz camp.

When the Soviet army liberated Auschwitz on January 27, 1945, their father Otto was the only one from the annex that survived. When he was released, he unfortunately learned that all of his family was dead. However, he returned to the Netherlands and discovered that his friend Miep Gies was able to preserve Anne Frank’s diary before the Nazis raided their hiding place. Otto read his daughters writings and saw that she wanted to become a journalist or a writer, so he published her diary in June of 1947. The book grew in popularity and was later translated into over 70 languages. In 1960, the secret annex where the family hid was turned into a museum called the Anne Frank House.