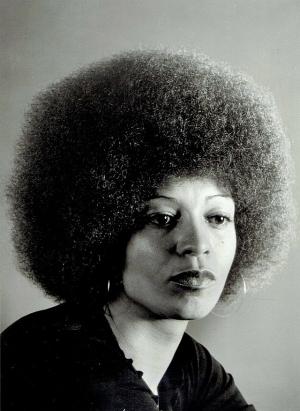 In this lesson, students will explore the life and intellectual arguments of Angela Davis. Students will engage in a diverse set of activities to better make sense of the struggles of women and historically marginalized communities. Students will understand her call for social solidarity and explore issues of power, class, capitalism, sexism, racism, and other injustices within the context of American history through texts and a jigsaw activity. Students will look at issues ranging from broader critiques of feminism to prison industrial complex to the election of Donald J. Trump in 2016. In addition, students will develop a greater understanding of how intersectionality impacted and still impacts the feminist movement today.

1.Students will be able to analyze primary and secondary sources to better understand and feel historical empathy towards modern feminists and their struggle for equity.

2. Students will be able to analyze and synthesize primary and secondary sources to better understand the experience of women in the 1970s to present.

3. Students will be engaged in a series of activities centered around the life of Angela Davis to understand the interconnectedness of issues of power, racism, sexism, capitalism, and other injustices.

4.  Quotes by Angela Davis (see below)

Direct students to examine the chart and respond to the following prompts:

2.  Use the barometer activity from Facing History and Ourselves to help students may sense of Angela Davis and her worldview. Read several statements from Davis out loud and ask students to move to the appropriate corner of the room (strongly agree, agree, disagree, strongly disagree). Ask students why they placed themselves in each corner of the room when appropriate. When doing this activity, it is important to remind students of classroom norms and guidelines for civility in the classroom.

3.   Students should read aloud the transcript (located below) between an interviewer for PBS and Angela Davis. This should be framed as a critique of capitalism and it should be noted that Davis affiliated with the Communist Party multiple times throughout her live.  After reading the transcript, students should discuss the following questions in groups and then as a whole class.

1.  How in this interview does, Davis argue for social solidarity? Why does she see this as the only path forward?

2.  According to Davis, how has the black community evolved over time? What are the consequences of this heterogeneity?

3.   In your opinion, how does one build social solidarity across social groups?

1.Where does Davis touch on themes of intersectionality in this speech?

2.Why must supporters at this address (the Women’s March) look beyond the cause of women?

3. To what extent do you believe that coalition building amongst very different groups with competing interests and beliefs, a possibility?

4. Exit Ticket: In a famous speech at the Dolores Huerta Foundation, Angela Davis was quoted as saying

Based on what you have learned today, assess the validity of that statement. In other words, does there need to be social solidarity to ensure success of each individual moment?

5. Following the Exit Ticket, the teacher should assign the homework below. This assignment intersects with identity, current events, and Davis’ call for social solidarity and allows students to accept or reject Davis’ call.

Based on what you have learned today about Angela Davis and intersectionality, pick an issue that you care about and analyze it from multiple perspectives, including those different from your own. Think about issues of race, gender, class, sexual orientation, religion, immigration status, ability, etc. and then respond to the following question:

CCSS.ELA-LITERACY.RI.11-12.2 Determine two or more central ideas of a text and analyze their development over the course of the text, including how they interact and build on one another to provide a complex analysis; provide an objective summary of the text.

CCSS.ELA-LITERACY.RI.11-12.6 Determine an author’s point of view or purpose in a text in which the rhetoric is particularly effective, analyzing how style and content contribute to the power, persuasiveness, or beauty of the text.

CCSS.ELA-LITERACY.RH.11-12.4 Determine the meaning of words and phrases as they are used in a text, including analyzing how an author uses and refines the meaning of a key term over the course of a text (e.g., how Madison defines faction in Federalist No. 10).

D2.His.3.9-12. Use questions generated about individuals and groups to assess how the significance of their actions changes over time and is shaped by the historical context.