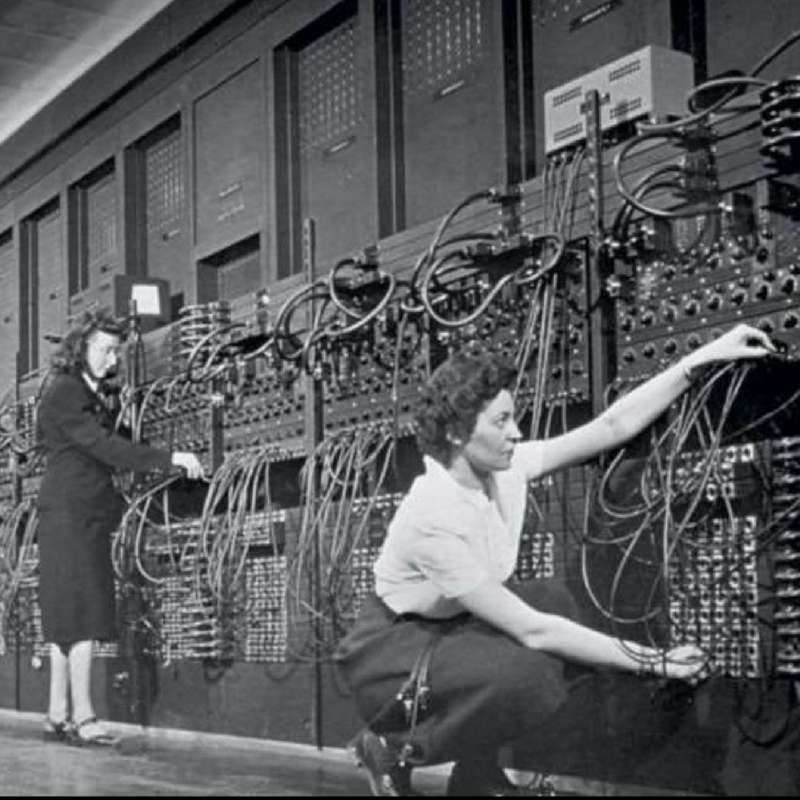 In the mid-1950s, Kathleen Wicker received an assignment at work with one of the first electronic computers at the National Aeronautics and Space Administration (NASA). “At the time, I hardly knew what a computer was,” she recalled in an interview 40 years later. “I thought it was a woman.”

Wicker’s statement might seem surprising today, but in the mid-twentieth century, the term “computer” referred to people, not machines. It was a job title, describing someone who performed mathematical equations and calculations, and NASA employed hundreds of women as “human computers” in this era.

The history of women’s involvement in computing work, however, began much earlier. Historian Mary Croarken found examples of female computers employed in the eighteenth-century: Mary Edwards, who supported herself and her family for decades computing astronomical tables for the British government’s annual Nautical Almanac, and Nicole-Reine Lepaute, who gained standing in French scientific circles doing similar calculating work. Though exceptionally rare, female computers like Edwards and Lepaute demonstrate women’s early engagement in the field. 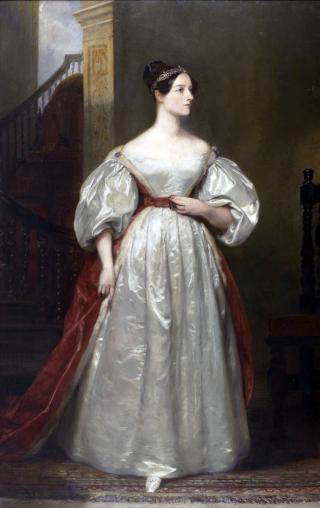 One of the most famous figures in early computing is Augusta Ada Lovelace. Trained in mathematics, Lovelace collaborated with Charles Babbage while he was designing his prototype computing machine, the Analytical Engine. In 1843, Lovelace published a set of “Notes” describing how the engine could be set up to solve mathematical equations (the process now known as programming), and considering the range of capabilities it might have. The engine, she suggested, had the potential to do more than calculate numbers—if it could manipulate numbers, then it could manipulate other kinds of data (like musical notes or letters of the alphabet) represented by numbers. Lovelace was the first to propose a use for computing machines that went beyond mathematics, and her statement marked a fundamental shift in thinking about the way computers could be applied.

By the late nineteenth-century, women began finding jobs in computing offices. In the United States, both men and women were employed as human computers to calculate large amounts of data in astronomy, the social sciences, statistical research, and ballistics testing. All this work was done by hand, using slide rules, curves, or basic desktop calculating machines.

World War II marked another watershed moment for computing, in terms of both labor and technical innovation. Wartime labor demands opened more positions to women. At the University of Pennsylvania’s Moore School of Electrical Engineering, for example, 200 female computers calculated artillery-firing tables for the US Army. Even so, it took about a month to complete one table. It was in the interest of making this process quicker that John Mauchly and J. Presper Eckert suggested building the ENIAC, the first fully electronic digital computer in the United States. In 1943, the Army gave Mauchly and Eckert a contract to develop the ENIAC (Electronic Numerical Integrator and Computer) at Penn. A year later, six women were hired to program it. 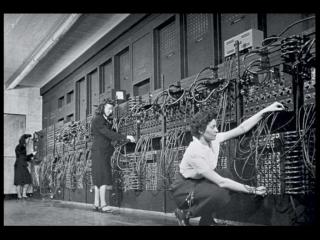 Often referred to as the “six women of ENIAC,” Jean (Jennings) Bartick, Betty (Snyder) Holberton, Frances (Bilas) Spence, Kay (McNulty) Mauchly, Marlyn (Wescoff) Meltzer, and Ruth (Lichterman) Teitelbaum were chosen through a two-stage selection process. All of them had college degrees, most in mathematics, and some were already working for the military as human computers. The ENIAC, however, presented an entirely new opportunity. At the time, no one knew exactly what programming and operating a computer would involve. There were no manuals until 1946, when Adele Goldstine, a programmer and instructor with the project, wrote one. By that point, the ENIAC women had “trained themselves,” learning about the computer and its components through trial and error.

The ENIAC filled an entire room, used almost 18,000 vacuum tubes, and had to be configured manually for each calculation it performed. Programming was a multi-day process that began with converting a mathematical problem into a form the computer could solve and designing the series of instructions used to configure the machine. Next, the women set the computer up, plugging in wires and setting switches. Finally, they ran the program, debugging it as needed until it worked perfectly. The women developed numerous programming techniques as they worked, and Holberton and Bartik created the ENIAC program for calculating ballistic trajectories, the original purpose the computer had been designed for.

Despite these important contributions, the ENIAC women received no public recognition at the time. The programmers were not mentioned at the big publicity event held for ENIAC in 1946. It was not until the 1990s, when the 50th anniversary of the computer prompted historians to look at the records, that their work on the project became widely known. 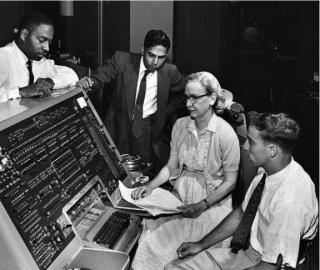 Grace Hopper and the UNIVAC

At the end of World War II, many computing jobs, like wartime jobs for women in general, were cut. However, the ENIAC programmers had skills and experience that were in demand. The field of electronic computing was expanding, and because it was so new, there was no existing workforce to staff it. Holberton and Bartik, for example joined the commercial company that produced the UNIVAC computer. There, they worked with another pioneering figure, Grace Murray Hopper. A math professor and US Naval Reserve officer, Hopper had programmed an early computer at Harvard, the Mark I, during the war. Hopper supervised programming for UNIVAC, invented the first complier, and developed the FLOW-MATIC and COBOL programming languages for business computing.

Women also pursued post-war computing in the fields of aeronautical and aerospace research. Beginning in the late 1930s, the National Advisory Committee for Aeronautics (NACA, the precursor to NASA) hired hundreds of women to work as human computers, taking on calculating work originally done by the engineers. Recruiters targeted white and African American college graduates with degrees in sciences, emphasizing the value of their education and the service they could provide to their country.

At NACA/NASA, female computers participated in cutting-edge projects from supersonic aircraft to space flight. Many sought out additional training and education, and some even became engineers. Yet, they found they had to prove that women could successfully do the task and seek out their own opportunities for advancement. Helping devise methods and techniques specific to the field of aeronautical and aerospace research, these women defined a central role for themselves in computing technology as it developed from calculating with slide rules to programming ad operating the first electronic computers. 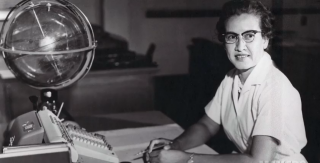 Katherine Johnson, awarded a Presidential Medal of Freedom in 2015 for her computing work, was one of these women. Johnson began working at NACA’s Langley Research Center in Virginia in 1953, when segregation was still policy across the South. As an African American woman, she was first assigned to the segregated “West Area” computing group but only spent a few weeks there. Reassigned to the Flight Research Division, Johnson went on to join NASA’s Space Task Force in 1958. There, she calculated trajectories for Alan Shepherd and John Glenn’s space flights, as well as the 1969 Apollo 11 trajectory to the moon. Johnson famously recounted how John Glenn requested that she double-check the computer calculations for the 1962 Friendship 7 mission. It took her a day and a half to run the calculations by hand, but she ultimately came up with the same numbers the computer had produced.

The opportunities and challenges faced by women in computing at NACA/NASA mirrored those in other areas of the computing industry, as women moved into areas of software development, programming, and computed science. Recovering the presence and key role women played in the development of computing can shift the historical understandings and perceptions of the field in the present

Sarah McLennan, PhD, is a Visiting Assistant Professor of History at Virginia State University. Her current research focuses on the role women played in the development of early computing at NASA, examining how gender and race shaped their experience in the workplace, as well as our perceptions of this technology today.

Originally published in Volume 23 of A Different Point of View "Women and Computing".

Rachel Levine became the highest-ranking openly transgender government official in U.S. history when she was confirmed by the Senate as the 17th Assistant Secretary for Health in March 2021.
READ MORE
Biography

Indra Nooyi, a business leader and strategic thinker, is widely considered to be one of the top CEOs in the world for her leadership of the global behemoth PepsiCo for 12 years.
READ MORE
.