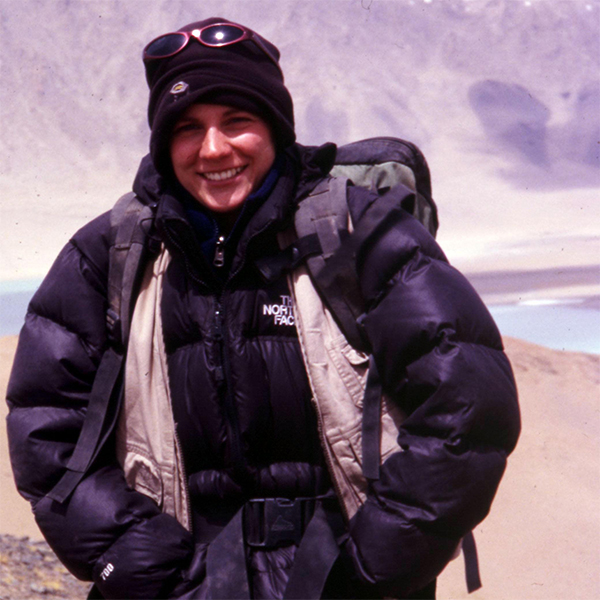 It has been more than twenty years since my boots touched terra firma at 11,450 feet elevation on the outskirts of Lhasa, Tibet.  My first time at high altitude was both exhilarating and utterly terrifying.  I was embarking on an adventure that was meant to be no nonsense field research for my PhD studies, but unbeknownst to me would end up being so much more.  In short, it would shake me to my core and forever change, at least in part, who I am as a woman and a scientist.

How in the world did I end up in a place like Tibet?  It all started in a geology class that I took to fulfill a science requirement.

I began college as an English major dreaming of making my living as a writer.  My eyes were laser focused on gaining entry into the world-renowned Newhouse School of Public Communication, where I would become a reporter while writing poetry and fiction on the side.  As is the case in most American universities, I had no choice but to take a science class, and so I chose geology.  Not because I was interested in geology, but because word on the street was that geology was easier than physics, chemistry, or biology (which, I can tell you now, it isn’t).  My strategy was to sit in the back row in my Doc Marten combat boots and flannel shirts, sulking and brooding about the injustice of it all.  Why did I have to take science?  It seemed a complete waste of my precious, 18-year-old time.

As much as I wanted to, I didn’t hate it for long.   As the weeks wore on, I found myself intrigued.  For the first time in my young life I felt a curiosity awakening in me like I had never felt before.  Images of mountains and rivers and volcanic eruptions embedded themselves into my memory and refused to let go.  The stories that went with them, like that of the Himalayas— the tallest mountains on Earth, formed as two continents collided over the course of 50 million years, crumpling up an ocean between them and thrusting rocks full of marine fossils almost 30,00 feet into the air—blew my mind and made me want to know more.  My professor showed us a picture of the Grand Canyon and I had never seen such beautiful colors—the rocks were red and orange and sandy yellow, the palette of the southwest, a place I had never been. He told us you could hike down six miles and stand atop rocks that had formed in an ancient ocean and were bursting with fossils of critters that represented a massive explosion of diversity in life on earth that happened around 540 million years ago.  I wanted to go there, touch the rocks, peer at those fossils and run my hands over their bumpy secrets.  But as much as I loved what I was learning, and desperately wanted to stand atop a mountain and know what stories it held within, I didn’t think I could cut it as a scientist.  I truly believed that science was too hard for me.  I had always been a writer.  I was interested in literature and poetry.  I had a plan to be a journalist, a job I had a clear picture of, and I hadn’t grown up a hiker, or camper, or outdoor enthusiast.  My parents weren’t professors or engineers.  My dad was a musician and my mom a housewife.  Neither of them went to college. There was no framework within which I could see myself as a scientist.

At the end of that semester, with all of those fantastic pages of earth history freshly inked in my mind, I still wasn’t convinced that science was the way to go.  And then, my whole world changed.  The summer after my freshman year, my father died of cancer.  An inoperable tumor deep within his neck was cutting off his wind pipe, taking his voice as it grew.  The cancer was the result of over twenty years on immunosuppressant drugs that he took to keep a transplanted kidney functioning.  As the cancer took hold, the kidney began to fail, and the man who had always been my anchor and my biggest supporter started fading in front of my eyes.  He died at the end of the summer in a sunny, sterile hospital room on a brilliant blue-sky day.  Losing him left me confused, adrift in self-doubt and questioning my every decision.  Just days before his death, he had held my hand and told me to get an education, that nothing was more important than finishing my degree.  Once he was gone, I wondered what getting an education might really look like.  Was there more to it than I had already imagined?  I returned to school just days after burying my dad and made the decision to declare geology as my major. Sometimes it takes an earthquake to clear the way for rebuilding.

Five years later as a young PhD student, I found myself with the chance to do field research in the remote interior of Tibet. My advisor had a grant, and he asked me if I wanted to go, expenses paid, and study in one of the most coveted natural laboratories on planet Earth.  If I said yes, I would leave Los Angeles in April and not return until August.  I would be the only woman in a group of six who would traverse much of the Tibetan plateau, mapping the geology as we drove hundreds of miles on practically non-existent dirt roads and camped next to fiery red layers of sandstone and deep blue metamorphic rocks exhumed from the farthest depths of Earth’s crust.  I would have no contact with the outside world—we didn’t have cell phones or Facetime or Skype.  We would have no running water and would have to boil the water we harvested from tiny, dirty streams in order to drink it safely.  The only people we would encounter were nomads living in tents made of yak-wool, working herds of goats and burning their excrement for fuel.  Even before leaving, I would face skepticism that I could cut it.  “Tibet is hard, even for big strong guys,” one advisor said to me as we discussed the possibility of my going on the trip. This didn’t help with my own fears and doubts, established by my lack of outdoor experience and fueled by my own family questioning my ability to safely and successfully complete the expedition.  It seemed like saying yes to this experience would be foolhardy, maybe even dangerous.

I had a choice to make: I could take the safe route and focus on laboratory work conducted in the safety of the earth and space sciences building.  Or I could take a risk, a chance on myself, and see where geology would take me.

Tibet turned out to be an important journey, both as a scientist and a person.  I roughed it in a tent without running water, not bathing or using an actual toilet for months.  I ate very little food and hiked up to fifteen miles a day at over 15,000 feet elevation. I lost a lot of weight but gained a lot of confidence in my physical abilities.  I found myself thinking more deeply than I ever had about science, the Earth, and myself.  I learned how to make astute geologic observations, create maps, and start to piece together the bigger picture of what had happened to the landscape millions of years prior that led to what I was seeing present day.  I began to feel like a real geologist and learned to trust my scientific mind.  I found a way to connect with my environment and recognize the stories it had to tell.  In Tibet, I became a scientist.  I wasn’t born to be a scientist, but science was the best thing that ever happened to me.  It took me well beyond my comfort zone—to the edge of exhaustion and the verge of starvation, into and out of altitude sickness, to the center of Tibet and back—and forced me to work harder than I ever had.

Becoming a scientist was the most difficult thing I ever did, but it was also the most rewarding.  Over the course of my PhD, I discovered that not only was I fascinated by the workings of our planet, I was also passionate about teaching.  Today, I have the privilege of working in a top-ranked geosciences department at a large public university that provides educational opportunities to thousands of students from all over the country.  I make my living in front of classes just like the one I took as a skeptical, bored freshman—general education earth science for non-science majors.  I know that the majority of my students will never go on to pursue geology, not because they aren’t capable, but because they will choose other fields like business, psychology, and communications.  But I also know that a class just like mine is a place where the scientists of the future are sometimes discovered.  It is a place where I have the opportunity to share my love of the earth and all its wonders with bright young minds who, like me, might have their curiosity sparked.  Is there anything better?

I have also found my way back to writing and hope to publish a book about how science changed my life.  And I am a mother who spends time with her kids while still finding success as a woman in science.  Sometimes I think we are so concerned about following the path we have set for ourselves that we miss the side roads that could take us to the most interesting places.  Places we never dreamed of.  Places that may have seemed off limits to us or beyond our ability to see.  For me, science was a detour. A scary one, at first, that took me on the most important adventure of my life.  It taught me more than just geology; it taught me that I am so much more capable than I give myself credit for.  It taught me that in the most difficult of pursuits I can find inner strength, if I just give it a chance.

As an artist and world traveler who never married or had children, Alma Woodsey Thomas circumvented society’s expectations for Black women born in the 19th century.
READ MORE
.