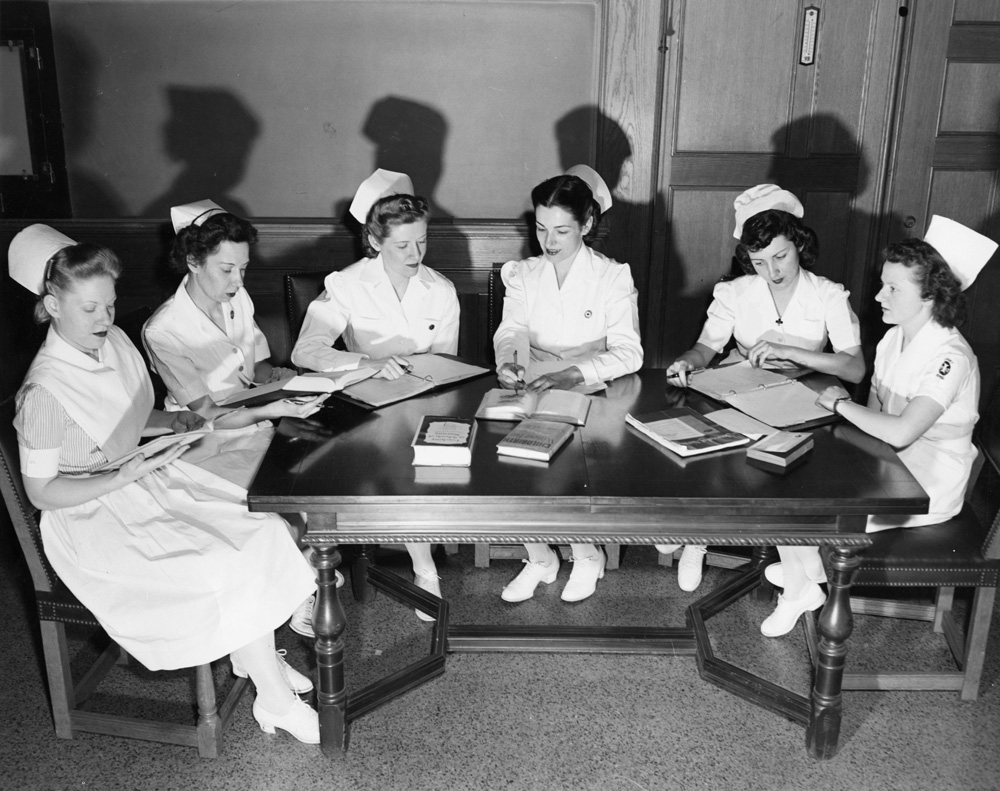 In Colonial America, midwives attended almost all births in the American colonies, practicing from their homes and passing the skills they had brought to the colonies from one woman to another. It wasn't until the turn of the 20th century, when medicine and public hospitals became popular and more accessible for middle and upper class families, that women began to choose physicians over midwives when giving birth. When the Stock Market crashed the Great Depression took hold, many Americans could no longer afford hospitals or medication. Despite the lack of resources available to them, lower class women on the poverty-stricken West Side of Chicago had a resource: Dr. Beatrice Tucker and the Chicago Maternity Center.

Tucker and her mentor, Dr. Joseph DeLee, shared a common belief that every baby born into the world was worthy of medical care equal to the level of care that wealthy parents received. Tucker brought this belief into her work, running a Maternity Center that attended to impoverished mothers-to-be. Establishing a legacy for herself at the Maternity Center, Dr. Beatrice Tucker ingrained into American society the support for equal opportunity for expectant mothers.

Similar to other well-known female doctors and nurses, Beatrice Tucker’s emergence into the medical field was not seamless. After receiving her medical degree from Rush University in Chicago, Tucker took an interest in Obstetrics, and was admitted into Dr. Joseph DeLee's obstetrics program at the Chicago Lying-in Hospital. One of the most well known obstetricians at the time, Dr. DeLee admitted twelve students into his program, ultimately choosing one student for a 3 year residency at the end of the program. Despite his noted dislike for women in the field of obstetrics, Beatrice Tucker was the first woman admitted to the program. Through her determination and talent in the field, Tucker changed Dr. DeLee’s mind by the end of her residency and was offered a position heading his pet project, the Chicago Maternity Center.

Founded by Dr. DeLee in 1895 as the Maxwell Street Dispensary, the clinic provided free obstetrical care for indigent women while training doctors in the latest methods of safe delivery. Reorganized and renamed the Chicago Maternity Center in 1931, it was considered to be one of the finest obstetrical facilities in the world until it closed in 1973. Located in a desperately poor immigrant working class community on Chicago's West Side, the purpose of the Chicago Maternity Center was to provide free obstetrical care for women in the indigent community, while also providing training to medical students and doctors from Chicago schools. Despite poor conditions in West Chicago, the Maternity Center was able to prove successful in provided Chicago's most underserved communities with the highest quality care. In the 40 years that Beatrice Tucker was the medical director of the Chicago Maternity Center, more than 100,000 babies were brought into the world. Many mothers received prenatal care, and were able to have home deliveries that were safer, and significantly cheaper, than hospital deliveries.

As the 1960’s came to a close, medical professionals began to shift opinion by inserting that all births should be considered high-risk “operations.” There was a decline in home births in the U.S., and thus a decline in business for the center. The increase in violence in West Chicago neighborhoods made working for the Maternity Center unattractive, and Medical schools became less interested in sending students to work there. The violence also made it harder for Tucker and her team to go into certain areas to deliver babies. Hospitals had more money, more equipment and more efficient birthing procedures. The Medicaid system gave free health coverage to low-income Americans in need, providing women in need with the opportunity to give birth in hospitals. Although the Chicago community had turned away from the Maternity Center and home births, there was no concrete evidence proving home births to be any less safe than hospital births.

Even four decades after the Chicago Maternity Center closed, its influence on the Chicago community that it once served is still being felt. The mission of the Chicago Maternity Center was to provide obstetrical care for women living in poverty, while also training medical students on childbirth procedures. Many programs exist in the United States today that aim to fulfill the same goal. Located in Chicago, the Alivio Medical Center’s Family Case Management program is dedicated to providing impoverished families with all the necessary services to keep both mother and child healthy.

Alivio gives out free pregnancy tests, ensuring that they are the first to tell a mother-to-be that she is pregnant, establishing a relationship right off the bat. Keeping with that relationship from the first trimester through the baby’s first birthday, Alivio helps families to find community resources like medical care, food pantries, transportation, shelters and more. Perhaps the most important resource that Alivio provides is an education for expectant mothers, which has proven to reduce child and maternal mortality rates.

Washington D.C., the city with the highest maternal mortality rates in the country, is home to a program that most closely resembles the Chicago Maternity Center. Located in Southwest D.C., Community of Hope’s Family Health and Birth Center is the only free-standing birth center in the capital. The center is focused on improving birth outcomes of low-income women in the DC area. Not only does the center offer a clean and safe place for mothers to give birth, it also offers an array of prenatal, post-partum and reproductive care, as well as resources for welcoming a baby (diapers and baby kits, for example). Community of Hope ensures that women living in the most underserved areas of D.C. have access to the care that they need from pregnancy through childbirth and beyond.

While most modern-day mothers-to-be choose the hospital route, many have the opportunity to choose between having a natural, non-intervening birth assisted by midwives, or a birth assisted by nurses and medication, all within the safety of a hospital room. Both practices operate in hospitals every day. As a Nurse Midwife, Wendy Allen’s job is to assist each woman in achieving the experience she desires, whether it involves medical intervention or not. Allen acknowledges that although many doctors and nurses see childbirth as a high-risk operation, "this is what women's bodies are designed to do. My job is to support the process and recognize when something isn't going the way that it should." The most important job for Allen is helping an expectant mother to feel at ease and cared for. Beatrice Tucker and Wendy Allen alike recognize that most women do best when they’re comfortable, which explains the emphasis on making sure that every woman, rich or poor, feels safe and calm while giving birth.

Dr. Beatrice Tucker and the Chicago Maternity Center lead the charge to ensure quality obstetric healthcare for low income communities across America. Today, the legacy of the Chicago Maternity Center lives on in programs such as Alivio and Community of Hope. These programs strive to make an impact on impoverished families and babies born into poverty. Dr. Beatrice Tucker understood that every newborn baby deserved the same level of medical care as the next, an ideology that American nurses and midwives still live by today. Modern-day Obstetric doctors and nurses have dedicated their work to ensuring the best possible experience, and, thanks to them, expectant mothers in the United States are ensured a safe and healthy birth, regardless of their economic standing and whether the birth occurs at home or in a hospital. By helping pregnant women every step of the way, obstetric nurses and midwives, like Wendy Allen, are rewarded with a feeling of empowerment on both sides: “When women can give birth the way they want to, it is so empowering for them.”

Rooks, Judith P. "The History of Midwifery." Our Bodies Ourselves. May 22, 2014. Accessed April 18, 2019. https://www.ourbodiesourselves.org/book-excerpts/health-article/history-of-midwifery/.