Little Orphan Annie to the Rescue 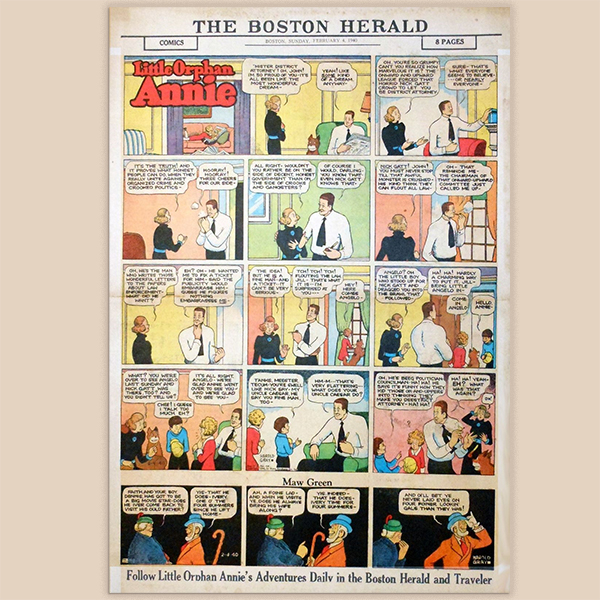 Little Orphan Annie was born in the funny pages on August 5, 1924, where she quickly became one of the most popular strips in syndication. In 1930 she made the jump from comic strip heroine to radio star, becoming the first nationally broadcast children’s program with a child as the main character. Over her 12 years on radio, Annie stood out as a female heroine in a male-dominated super hero universe competing against Buck Rogers and Captain Midnight for listeners. Her longest lasting cultural contribution may have been establishing children as a market for consumer goods through sophisticated product tie ins. Through her many adventures she defied traditional gender stereotypes about girls all while promoting her creator’s point-of-view of American politics.

Annie didn’t start out as Annie, but rather Otto. Annie’s creator, World War I veteran Harold Gray, opened a commercial art studio in Chicago in 1920. His work experience included a stint at the Chicago Tribune, and one of his first clients was Sidney Smith, who created The Gumps comic strip. While assisting Smith with his artwork, Gray developed ideas for his own strip. He liked the idea of an orphaned character who was free of relatives and social complications. Thus “Little Orphan Otto” was born. The impetus behind the gender transition is murky, with Gray having offered different variations on the story over the years. However, in a 1951 interview Gray pointed out that at the time Annie launched there were 40 strips with boys as main characters and only three with girls. Differentiating himself in a crowded field may have motivated the gender switch along with the desire to appeal to female readers. By the 1930s, Annie figured among the top five most popular comic strips in in the United States.

Annie as a Political Metaphor

The first strip introduces Annie as an orphan. She’s portrayed as a Dickensian-type hero, exploited in the orphanage and abused by unfeeling adults. By the second strip, she demonstrates self-reliance by punching the mean boy who attempts to bully her. Gray fashions Annie as an anti-Oliver Twist. Where male Oliver is meek and passive—in contrast to 19th-century attitudes about male characteristics—20th-century Annie is neither ladylike nor cute. She was the antithesis of Shirley Temple, another curly-haired,1930s cultural icon known for portraying orphans. Annie goes off on her own and has adventures. And while she frequently winds up in dicey situations, she usually saves herself.

Gray enlarged on the themes of self-reliance, turning Annie into a metaphor for the benefits of Americanism and free enterprise. His conservative political leanings pervade the strip, making it the first nationally syndicated comic with a political perspective. Gray objected to Franklin Roosevelt’s New Deal government programs. He depicted Annie and her adoptive parent “Daddy” Warbucks as self-made Americans who epitomized the benefits of hard work and capitalism, eschewing reliance on government. Annie’s gender is significant as Gray makes the point through her that even female orphans can succeed with hard work and perseverance.

Annie jumped from newspapers to radio in 1930. In doing so, she became less political and more commercial. Though the newspaper comic strip was not aimed towards children, the character appealed to the Ovaltine company—producers of malted drink mixes used to flavor milk—which was looking for a radio concept to appeal directly to children. The company’s strategy was to create product demand among children and develop a new consumer group. Ovaltine’s Chicago-based advertising agency wrote and produced Little Orphan Annie for the radio. While Annie was not the first kid’s show, it was the first profitable kid’s show.

Little Orphan Annie ran on radio from 1930 to 1942 where it led in ratings as well as sponsor profits. Annie’s sidekick, neighbor boy Joe Corntassel, helped make the show attractive to boys. Its success, according to radio historians, lay in having a child as a lead character, unlike other shows that featured teenage and young adult protagonists. Radio historian Jim Harmon observed that Annie and Joe “seemed to be children who were trying to cope with a strange and complex adult world.” A sentiment that summed up the Depression years in America.

The sponsor kept interest high by offering special premiums to fans. Ovaltine was not the first radio show to offer premiums to listeners. But through Annie, it developed the most successful marketing model. Children collected box tops or labels, mailed them to a clearinghouse, and in return received toys with program tie-ins. Early Annie and Ovaltine-branded premiums included the Ovaltine shake cup, theme song sheet music, and the wildly popular decoder badges. Competing sponsors followed suit, offering premiums and product ties-ins across the channel spectrum.

Children’s radio premiums increased engagement and loyalty. The Annie decoder pin became one of the most popular and memorable premiums. Starting in the mid1930s, Little Orphan Annie programs included secret messages solvable only by members of Annie’s Mystery Radio Club. The coded messages foreshadowed the next episode’s events and were solvable only with an official decoder that was redeemed in exchange with proof-of-purchase from Ovaltine products. Ovaltine issued new badges yearly, forcing children to send for new ones—accompanied with new labels—to continue the game. Annie’s decoder badge was among the most popular of all radio premiums and widely copied.

The decoder badge fit with Annie’s image as a no-nonsense, problem-solver. Breaking with traditional gender stereotypes of a good yet passive girl, Annie faced a range of increasingly exotic bad guys throughout the 1930s, both on the radio and in the comics. During World War II, she added support for the war effort to her repertoire. In between organizing Junior Commandos and collecting newspapers and scrap metal, she blew up a German U-boat.

Annie is tougher than hell, with a heart of gold and a fast left, who can take care of herself because she has to. She’s controversial, there’s no question about that. But I keep her on the side of motherhood, honesty, and decency. ~ Harold Gray

Little Orphan Annie’s comic strip ran in syndication from August 5, 1924 to June 13, 2010. Throughout her 86-year run, Annie was the exception to the comic book hero rule. She employed ingenuity rather than super powers. She remained optimistic about the values of hard work. Most importantly: she was a girl. In the end, Annie epitomized the quintessential American rugged individualist.

The Little Orphan Annie radio show featured coded messages throughout the 1930s. Contrary to the story line in the popular movie A Christmas Story, the coded message was never “Drink more Ovaltine.” Below is a facsimile of the 1936 decoder badge. Use this badge to decode the secret messages in the 1936 Annie episodes, many of which can be downloaded from FreeRadioClassics.com.

The secret message is from episode 1020 “Little Orphan Annie Watching the Bridge Being Built”.

Tonight is club night for all you 1936 members of Orphan Annie’s Secret Society. And right after tonight’s adventure is over we’re going to broadcast another secret message in Annie’s mystery radio code. So, be sure and keep listening.

Here is the coded message.

Harmon, Jim. 2003. Radio mystery and adventure: and its appearances in film, television, and other media. Jefferson, N.C.: McFarland & Co.