January is National Blood Donation Month, which recognizes the lifesaving contributions of blood donors. Women have been of historic importance both as donors as well as donation center staff. But it was one woman, Clara Barton, whose vision of volunteerism during crisis and her founding of the American Red Cross paved the way for the truly amazing system of altruistic blood donation in the US. 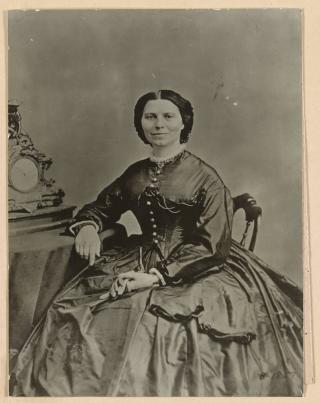 Clara Barton understood the importance of giving. Barton lived in Washington, DC at the start of the Civil War. When casualties from her Massachusetts home town were brought to local hospitals, she set out to help. She quickly realized that the profound shortage of medical supplies and assistance was leading to unnecessary death and suffering.

Barton established a network for collecting and distributing donated medical supplies. In 1862 she asked for and received permission to transport supplies directly to the front lines. Barton personally escorted wagon loads of supplies across the county, visiting all of the major battlefields in Maryland, Virginia, and South Carolina. Her service continued after the war ended in 1865 when she accepted Congress’ request to locate thousands of missing soldiers and bring resolution to their families.

In 1869, Barton became inspired by the newly formed Red Cross in Europe and set out to create an American version. She wrote pamphlets, made speeches, and lobbied politicians to support her cause. Her efforts paid off when the American Association of the Red Cross was formed on May 21, 1881. Barton was elected the first president. Local chapters formed throughout the country to help people during times of crisis and natural disaster.

The US government turned to the Red Cross in 1941, after the attack on Pearl Harbor, to promote and coordinate blood donation efforts for the US military. While experimental blood transfusion had been practiced for decades, World War II precipitated rapid advancement in transfusion techniques and brought blood donation to national attention. The Red Cross program focused national attention on the importance of voluntary blood donation, establishing it as a patriotic duty. The program collected more than 13 million pints before the Red Cross ended the military blood program in 1945.

Donation Continues After the War

World War II demonstrated the lifesaving promise of blood transfusion, and, afterwards, blood banks were set up across the country. Today, Clara Barton’s Red Cross alone collects approximately 5.3 million units of blood, from roughly 3.1 million donors nationwide, and distributes over 7.7 million blood products for transfusion. This accounts for 40% of the nation’s blood supply.

Barton recognized the importance of giving help without personally knowing the people who would receive it. She encouraged people to respond to disaster with support. Altruistic blood donations, donations made without knowing the recipient or in expectation of payment, exemplify her commitment to extending generosity to those in need.

Alexandria Ocasio-Cortez (commonly referred to by her initials, AOC) is the youngest woman and youngest Latina to ever serve in the United States Congress.
READ MORE
Biography