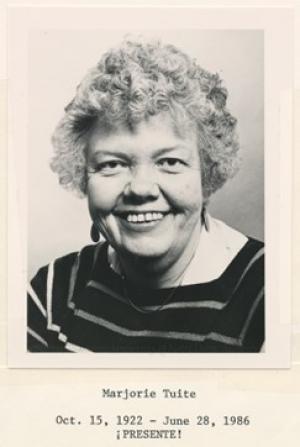 Sister Marjorie Tuite, O.P. was a Catholic feminist nun who fought for gender equality, especially within the Catholic Church. Tuite was a longtime activist in the broader struggle for civil rights. She was fiercely committed to her church and worked for several decades to make it more inclusive.

Tuite, who also went by the nickname Marge, was born in 1922 in New York City. She earned a Master’s Degree in Theology from Manhattanville College and a Doctorate in Ministry from St. Mary of the Lake Seminary in Chicago. Tuite entered the order of Dominican nuns in 1942 at age 20. A lifelong advocate for women’s rights, Tuite was inspired by important changes for Catholic nuns by the Vatican II reforms and by consciousness raising sessions during the women’s liberation movement in the 1960s. She was fiercely committed to her church and worked for several decades to make it more inclusive.

During the 1970s, many feminist nuns were politically vocal, even when it came to challenging a male-controlled, hierarchical church. Many were awed by Tuite’s ability to publicly practice her faith while being confrontational in her struggle for justice. Tuite was well known for saying “The church is totally sexist.” Tuite was also known among her friends and colleagues as someone who worked to build solidarity amongst diverse groups of women and who was consistently brave enough to call out sexism. She encouraged women to work together to see connections between a variety of civil rights issues and look to one another as sources of support. Many other women’s rights activists were inspired by Tuite’s political strategies and often repeated her beloved catch phrase, “Do the analysis, make the connections.”

Deeply inspired by her Catholic faith, Tuite disliked individual approaches to societal issues and worked towards institutional change through legislation with a variety of organizations. Tuite once said, “I can do nothing by myself….it’s not just changing a little piece of legislation here or there. We’re talking about developing a movement of folks from one end of this country to the other. Therefore, we have to talk to peace groups, we have to talk to civil rights groups, we have to talk to women’s groups. There is no way to do political work unless you are networked to others who are doing the same thing.” Tuite supported the Equal Rights Amendment.

Tuite was also well known for her involvement in Church Women United. She participated in many conferences and workshops advocating for women’s ordination and was one of the most publicly visible Catholic nuns who supported the ability for women to be priests. As a result of her strong leadership skills, Tuite successfully organized a gathering of over 40 sisters in Washington, D.C. in 1971. This gathering led to the creation of NETWORK, a social justice lobby of Catholic nuns that continues to advocate for human rights in Washington, D.C. In the mid-1980s, Tuite served as the national coordinator of the National Assembly of Religious Women, an important political group of Catholic nuns who fought for gender equality. Throughout the first half of the 1980s, Tuite also worked as a public speaker, raising awareness about human rights violations committed by the United States in Central America. Her speeches were well documented in the press and she publicly put pressure on the Regan administration’s foreign policy goals; she believed they were misguided policies that were harmful to the impoverished in Nicaragua and neighboring countries.

Tuite was unafraid to speak up about the importance of hearing a wide variety of opinions within the Catholic community. Sometimes her activism became politically controversial. On October 7, 1984, Tuite, as well as many other Catholic nuns and lay Catholics, signed an ad in The New York Times calling for a pluralist position on abortion. This statement was issued in support of the pro-choice vice presidential candidate Geraldine Ferraro, who was Catholic. Although signing the statement did not mean one was pro-choice, it did indicate the signers believed in an open dialog about the many diverse opinions on reproductive rights. The hierarchy of the Roman Catholic Church considered this support of open dialogue as blasphemy, and bishops and other male church officials publicly criticized Tuite for her stance.

Many of her friends felt the same political pressure as Tuite in the ad’s aftermath. The pressure led to a decline in Tuite’s health. In 1986, shortly after the statement was issued, Tuite died during surgery. In her many obituaries, Tuite was remembered for her leadership of Church Women United, her bravery to stand up for her beliefs, and her ability to fight for the rights of other women. She left a legacy that is still seen today in the Women-Church Convergence, a group that continues to organize for women to have the right to be Roman Catholic priests.