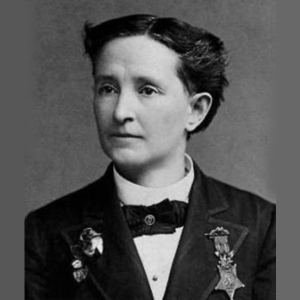 In all of United States History, there has only been one woman to receive the Medal of Honor. Mary Edwards Walker is that woman. As a surgeon, women’s rights advocate, abolitionist, and spy, Walker became the first female U.S. Army surgeon during the Civil War. Her legacy has been celebrated across the country, and in 2012 Walker’s hometown unveiled a 900-pound bronze statue in honor of her contributions.

During her work as a surgeon in the war, Walker often crossed battle lines to care for soldiers and civilians. In April of 1864, Walker had just finished helping a Confederate doctor with a surgery when she was captured by Confederate troops as a spy. She was held as a prisoner of war for four months. While imprisoned, she refused to wear the women’s clothes provided to her. She wore men’s clothes her entire life because they were more comfortable and hygienic. She even wore pants under her skirt at her wedding. Walker was released from prison in August of 1864 and became the assistant surgeon of the Ohio 52nd Infantry a month later. After the war, Walker was awarded the Medal of Honor by President Andrew Johnson. A few years later, Walker published a book called Hit in 1871.