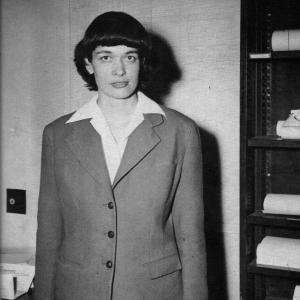 It is well known that the United States produced the first nuclear bomb in 1945. However, less well known are the women who contributed their talents to make this event a reality. Physicist Leona Woods Marshall Libby was one of the women who helped to create the atomic weapon. She worked on the team that constructed the first nuclear chain reaction leading to the development of the bomb.

Born Leona Woods in 1919, she grew up in La Grange, Illinois. Her parents Weightstill Arno and Mary Woods both attended the University of Chicago, and her father obtained a law degree in 1913. Libby showed remarkable academic promise from a young age. She attended Lyons Township High School, where she graduated from high school in 1934 at age 14. She then went on to attend college in 1935 at her parents’ alma matter, the University of Chicago. While at university, Libby was active in a variety of school groups. She played basketball and was elected to be captain of the women’s freshman team. She also became a cabinet member for the campus branch of the YMCA. As a member of this group, she participated in a wide variety of events, including organizing teas for freshman and volunteering in the community. She completed her Bachelor of Arts degree in chemistry in 1938, when she was only 19 years old.

The activities carried out by Fermi’s team at Chicago were associated with a nationwide atomic research program known as the “Manhattan Project”. When World War II began in 1939, both the United States and the United Kingdom began working to create a nuclear bomb. In 1941, the United States entered the war and began to focus more attention and financial resources on atomic research, surpassing the British. There were many facilities and scientists throughout the US who worked on this project. Laboratories existed in many locations, including Tennessee, Illinois, and Washington.

Fermi and other scientists, including Libby, carried out experiments to determine how to create a self-sustaining nuclear chain reaction. Creating the reaction was one of the keys to understanding how to construct an atomic bomb.

As part of her work at Chicago, Libby created a boron trifluoride counter, which detected neutron activity. This was vital to a nuclear chain reaction. Working in secrecy in the University of Chicago’s abandoned Stagg Field Stadium, the team created what came to be known as Chicago Pile 1 (CP-1). The “Pile,” as it was also known, measured 20 feet high by 25 feet wide. It consisted of 57 layers of material with 380 tons of graphite, 50 tons of tubealloy oxide, and 6 tons of tubealloy metal. The experiment was carried out to determine if nuclear fission could be created using these materials.

On a cold December 2, 1942, Fermi’s team tested their hypothesis and were successful. The first step toward the creation of a nuclear bomb had been attained. There were approximately 42 scientists observing the experiment. At age 23, Libby was the first and only woman to witness the event. With her counter, Libby took measurements of the level of neutron activity as the experiment proceeded.

Part of the process of constructing nuclear bombs was building up enough plutonium or uranium to create a nuclear reaction. In the war, three bombs were built, one of uranium and two of plutonium. A special factory was constructed at Hanford, Washington to refine the plutonium needed to build the bombs. Later in the war, Libby worked at Hanford to help in the process of consolidating the supply of plutonium. The material obtained at Hanford was used to make the second nuclear bomb, it was dropped on Nagasaki, Japan on August 9, 1945 and World War II ended days later.

When asked years later about her involvement in the atomic weapons program and the dropping of bombs on Japan, Libby believed the action was necessary. She pointed to the probability of high loss of life among the Allies fighting in the Pacific, if the bombs had not been dropped. Libby also highlighted the real fear among the scientific community that Germany would discover how to build a nuclear bomb ahead of the Allies.

After the war concluded, Fermi’s team held regular anniversaries at the University of Chicago to mark their achievements in nuclear research. For her achievements in science, Libby was honored by Mademoiselle magazine in 1946 by being named one of the top women of the year.

Libby continued her work in chemistry by holding fellowships at the University of Chicago’s Institute of Nuclear Studies, Princeton’s Institute of Advanced Studies and at Brookhaven National Laboratory. In 1962, she became a professor at New York University. She later joined the physics department at the University of Colorado. She held this post from 1964-1970. Her final academic position was at UCLA, where she served as visiting professor of environmental studies and engineering. In this role, she researched climate change and food irradiation. Libby died in 1986.

Try it! Curate an Online Exhibit