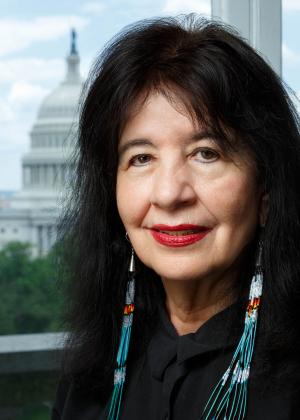 As a poet, activist, and musician, Joy Harjo’s work has won countless awards. Most recently, Harjo became the first Native American United States Poet Laureate in history. In addition to her many books of poetry, she wrote two books for young audiences and released five award-winning albums. A member of the Muscogee Creek Nation, Harjo’s creations are often inspired by Native American stories, languages and myths.

Joy Harjo was born on May 9, 1951 in Tulsa, Oklahoma. The first of four children, Harjo’s birth name was Joy Foster. Her father was a sheet-metal worker from a famous Creek family. His great-grandfather was a Native American leader in the Red Stick War against President Andrew Jackson in the 1800s. Harjo’s mother was a waitress of mixed Cherokee, Irish, and French descent. Growing up, Harjo was surrounded by artists and musicians, but she did not know any poets. Her mother wrote songs, her grandmother played saxophone, and her aunt was an artist. These influential women inspired Harjo to explore her creative side. Harjo recalls that the very first poem she wrote was in eighth grade. However, Harjo did not start to write professionally until later in life.

In addition to art and creativity, Harjo also experienced many challenges as a child. In her autobiography, Harjo discussed her father’s struggle with alcohol and violent behavior that led to her parent’s divorce. After this, Harjo’s mother married another man that also abused the family. Harjo had a hard time speaking out loud because of these experiences. She said, “I remember the teachers at school threatening to write my parents because I was not speaking in class, but I was terrified.”[1] Instead, Harjo started painting as a way to express herself. After being kicked out of the house by her stepfather at age sixteen, she attended the Institute of American Indian Arts in Santa Fe, New Mexico. While she was at this school, Harjo participated in what she calls the “renaissance of contemporary native art.”[2] This was when Harjo and her classmates changed how native art was represented in the United States. During this time, she joined one of the first all-native drama and dance groups. She also wrote songs for an all-native rock band. Harjo soon met fellow student Phil Wilmon and they got married. While she was still a teenager, Harjo and Wilmon had a son named Phil Dayn. The couple later divorced. At age nineteen, Harjo became a full member of the Mvskoke (Muscogee) branch of the Creek tribe. She then changed her last name to Harjo which means “courage,” after her grandmother.

After graduating from high school, Harjo attended the University of New Mexico as a Pre-Med student. However, she was inspired by the art and creativity around her. She switched her major to art, and then again to creative writing after hearing Native American poets. She studied closely with various writers, and eventually developed a relationship with Native American poet Simon J. Ortiz. Harjo and Ortiz had a daughter together named Rainy Dawn. Shortly after, Harjo began writing poetry at the age of twenty-two. She published her first book of nine poems called The Last Song in 1975. Harjo then graduated from college a year later and started the Master of Fine Arts program in creative writing at the University of Iowa (Iowa Writers’ Workshop). When she graduated from this program in 1978, she began taking film classes and teaching at various universities including; the Institute of American Indian Arts in Santa Fe, Arizona State University in Tempe, the University of Colorado in Boulder, the University of Arizona in Tucson, and the University of New Mexico in Albuquerque.

In 1980, Harjo published her first full-length volume of poetry called What Moon Drove Me to This? This book of poetry includes all of the poems she wrote in her 1975 collection. She went on to publish eight books of poetry, a memoir, and two books for young audiences. One of her most famous poetry volumes, She Had Some Horses, was first published in 1982. She has won many awards for her writing including; the New Mexico Governor’s Award for Excellence in the Arts, the Lifetime Achievement Award from the Native Writers Circle of the Americas, the William Carlos Williams Award from the Poetry Society of America and The Ruth Lilly Poetry Prize. She has also received fellowships from the John Simon Guggenheim Memorial Foundation, the Arizona Commission on the Arts, the Witter Bynner Foundation, and the National Endowment for the Arts. In 2019, Harjo was elected a Chancellor of the Academy of American Poets and became the 23rd United States Poet Laureate from the Library of Congress. She has also written several film scripts, television plays, and released five albums of original music. In 2009, she won a NAMMY (Native American Music Award) for Best Female Artist of the Year.

Harjo currently lives in Tulsa, Oklahoma and teaches English and American Indian studies at the University of Illinois at Urbana-Champaign.