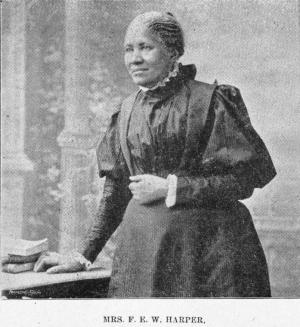 As a poet, author, and lecturer, Frances Ellen Watkins Harper was a household name in the nineteenth century. Not only was she the first African American woman to publish a short story, but she was also an influential abolitionist, suffragist, and reformer that co-founded the National Association of Colored Women’s Clubs.

Frances Ellen Watkins Harper was born on September 24, 1825 in Baltimore, Maryland. An only child, Harper was born to free African American parents. Unfortunately, by the time she was three years old, both of her parents died and she became an orphan. Harper’s aunt and uncle, Henrietta and William Watkins, raised her after her parent’s death. Her uncle was an outspoken abolitionist, practiced self-taught medicine, organized a black literary society and established his own school in 1820 called the Watkins Academy for Negro Youth. Frances Harper learned from her uncle’s activism and she attended the Watkins Academy until she was thirteen years old. At that age, children were typically expected to join the workforce. Harper took a job as a nursemaid and seamstress for a white family that owned a bookshop. Her love for books blossomed as she spent any free time she had in the shop. By age twenty-one, Harper wrote her first small volume of poetry called Forest Leaves.

When she was twenty-six years old, Harper left Maryland and became the first woman instructor at Union Seminary, a school for free African Americans in Wilberforce, Ohio. She taught domestic science for a year and then moved to a school in York, Pennsylvania. Shortly after she began working as a teacher, her home state of Maryland passed a law stating that free African Americans living in the North were no longer allowed to enter the state of Maryland. If found, they would be imprisoned and sold into slavery. Harper was now unable to return to her own home. She decided to devote all of her efforts to the antislavery cause. Harper moved in with William and Letitia George Still who were abolitionists and friends of her uncle. William Still became known as the father of the Underground Railroad while he was an office clerk and janitor in the office of the Pennsylvania Anti-Slavery Society. Supported by the Stills, Harper began writing poetry for antislavery newspapers. Her poem “Eliza Harris,” was published in The Liberator, and in Frederick Douglass’ Paper. By the time Harper left Philadelphia in 1854, she had compiled her second small volume of poetry called Poems on Miscellaneous Subjects with an introduction by abolitionist William Lloyd Garrison.

For the next eight years, Harper traveled across the United States and Canada as a lecturer. After her first speech entitled, “The Elevation and Education of our People,” she was hired as a traveling lecturer for various organizations including the Maine Anti-Slavery Society and the Pennsylvania Anti-Slavery Society. In addition to her antislavery lectures, Harper was committed to the struggle for women’s rights and the temperance movement. She included her observations from her travels in her writings and began to publish novels, short stories, and poetry focused on issues of racism, feminism and classism. In 1859, Harper published a short story in the Anglo-African Magazine called “The Two Offers.” This short story about women’s education became was the first short story published by an African American woman.

On November 22, 1860, Frances married Fenton Harper and the couple had a daughter named Mary. Unfortunately, Fenton Harper died four years later. After her husband’s death, Frances Harper began touring again and formed alliances with prominent women’s rights activists. In 1866, Harper spoke at the National Woman’s Rights Convention in New York. Her famous speech entitled, “We Are All Bound Up Together,” urged her fellow attendees to include African American women in their fight for suffrage. She emphasized that Black women were facing the double burden of racism and sexism at the same time, therefore the fight for women’s suffrage must include suffrage for African Americans. The next day, the Convention held a meeting to organize the American Equal Rights Association to work for suffrage for both African Americans and women. However, the organization soon split over the decision to support the fifteenth amendment, granting African American men the right to vote. Harper, along with Frederick Douglass and many others supported the amendment and helped to form the American Woman Suffrage Association.

Harper spent the rest of her career working for the pursuit of equal rights, job opportunities, and education for African American women. She was a co-founder and vice president of the National Association of Colored Women’s Clubs, and the director of the American Association of Colored Youth. She was also the superintendent of the Colored Sections of the Philadelphia and Pennsylvania Women’s Christian Temperance Unions. Frances Ellen Watkins Harper died on February 22, 1911 in Philadelphia, Pennsylvania.