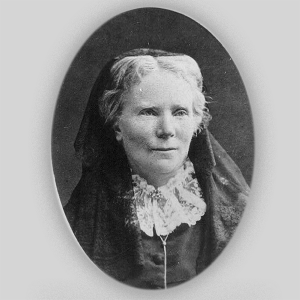 The first woman in America to receive a medical degree, Elizabeth Blackwell championed the participation of women in the medical profession and ultimately opened her own medical college for women.

In 1832, the Blackwell family moved to America, settling in Cincinnati, Ohio. In 1838, Samuel Blackwell died, leaving the family penniless during a national financial crisis. Elizabeth, her mother, and two older sisters worked in the predominantly female profession of teaching.

Blackwell was inspired to pursue medicine by a dying friend who said her ordeal would have been better had she had a female physician. Most male physicians trained as apprentices to experienced doctors; there were few medical colleges and none that accepted women, though a few women also apprenticed and became unlicensed physicians.

While teaching, Blackwell boarded with the families of two southern physicians who mentored her. In 1847, she returned to Philadelphia, hoping that Quaker friends could assist her entrance into medical school. Rejected everywhere she applied, she was ultimately admitted to Geneva College in rural New York, however, her acceptance letter was intended as a practical joke.

Blackwell faced discrimination and obstacles in college: professors forced her to sit separately at lectures and often excluded her from labs; local townspeople shunned her as a “bad” woman for defying her gender role. Blackwell eventually earned the respect of professors and classmates, graduating first in her class in 1849. She continued her training at London and Paris hospitals, though doctors there relegated her to midwifery or nursing.  She began to emphasize preventative care and personal hygiene, recognizing that male doctors often caused epidemics by failing to wash their hands between patients.

In 1851, Dr. Blackwell returned to New York City, where discrimination against female physicians meant few patients and difficulty practicing in hospitals and clinics. With help from Quaker friends, Blackwell opened a small clinic to treat poor women; in 1857, she opened the New York Infirmary for Women and Children with her sister Dr. Emily Blackwell and colleague Dr. Marie Zakrzewska. Its mission included providing positions for women physicians. During the Civil War, the Blackwell sisters trained nurses for Union hospitals.

In 1868, Blackwell opened a medical college in New York City. A year later, she placed her sister in charge and returned permanently to London, where in 1875, she became a professor of gynecology at the new London School of Medicine for Women. She also helped found the National Health Society and published several books, including an autobiography, Pioneer Work in Opening the Medical Profession to Women (1895).