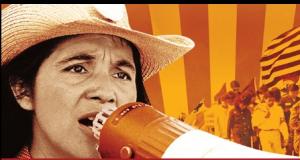 Co-founder of the United Farm Workers Association, Dolores Clara Fernandez Huerta is one of the most influential labor activists of the 20th century and a leader of the Chicano civil rights movement.

Born on April 10, 1930 in Dawson, New Mexico, Huerta was the second of three children of Alicia and Juan Fernandez, a farm worker and miner who became a state legislator in 1938. Her parents divorced when Huerta was three years old, and her mother moved to Stockton, California with her children. Huerta’s grandfather helped raise Huerta and her two brothers while her mother juggled jobs as a waitress and cannery worker until she could buy a small hotel and restaurant. Alicia’s community activism and compassionate treatment of workers greatly influenced her daughter.

Discrimination also helped shape Huerta. A schoolteacher, prejudiced against Hispanics, accused Huerta of cheating because her papers were too well-written. In 1945 at the end of World War II, white men brutally beat her brother for wearing a Zoot-Suit, a popular Latino fashion.

Huerta received an associate teaching degree from the University of the Pacific’s Delta College. She married Ralph Head while a student and had two daughters, though the couple soon divorced. She subsequently married fellow activist Ventura Huerta with whom she had five children, though that marriage also did not last. Huerta briefly taught school in the 1950s, but seeing so many hungry farm children coming to school, she thought she could do more to help them by organizing farmers and farm workers.

The recipient of many honors, Huerta received the Eleanor Roosevelt Human Rights Award in 1998 and the Presidential Medal of Freedom in 2012. As of 2015, she was a board member of the Feminist Majority Foundation, the Secretary-Treasurer Emeritus of the United Farm Workers of America, and the President of the Dolores Huerta Foundation.