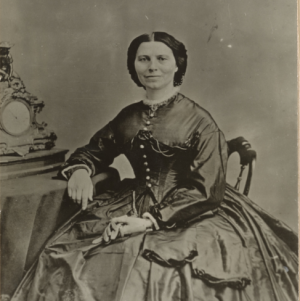 Born on December 25, 1821 in Oxford, Massachusetts, Barton was the youngest of Stephen and Sarah Barton’s five children. Her father was a prosperous farmer. As a teenager, Barton helped care for her seriously ill brother David—her first experience as a nurse.

Barton’s family directed their painfully shy daughter to become a teacher upon the recommendation of renowned phrenologist L.N. Fowler, who examined her as a girl. She began teaching at age 18, founded a school for workers’ children at her brother’s mill when she was 24, and after moving to Bordentown, New Jersey, established the first free school there in 1852. She resigned when she discovered that the school had hired a man at twice her salary, saying she would never work for less than a man.

In 1854 she was hired as a recording clerk at the US Patent Office in Washington, DC, the first woman appointed to such a post. She was paid $1,400 annually, the same as her male colleagues. However, the following year, Secretary of the Interior Robert McClelland, who opposed women working in government, reduced her to copyist with a lower salary. In 1857, the Buchanan Administration eliminated her position entirely, but in 1860, she returned as copyist after the election of President Abraham Lincoln.

When the Civil War began in 1861, Barton quit her job and made it her mission to bring supplies to Union soldiers in need—among them, men of the 6th Massachusetts Infantry. This started a life-long career of aiding people in times of conflict and disaster. In 1862, she received official permission to transport supplies to battlefields and was at every major battle in Maryland, Virginia, and South Carolina, where she also tended to the wounded and became known as the “angel of the battlefield.” She was officially named head nurse for one of General Benjamin Butler’s units in 1864, even though she had no formal medical training. She joined Frances Gage in helping to prepare slaves for their lives in freedom. After the war, Barton helped locate missing soldiers, mark thousands of graves, and testified in Congress about her wartime experiences.

In 1869, Barton traveled through Europe to regain her health. While in Switzerland, she learned about the International Red Cross, established in Geneva in 1864. Returning to the US, Barton built support for the creation of an American society of the Red Cross by writing pamphlets, lecturing, and meeting with President Rutherford B. Hayes. On May 21, 1881, the American Association of the Red Cross was formed; Barton was elected president in June. In 1882, the US joined the International Red Cross.

Barton remained with the Red Cross until 1904, attending national and international meetings, aiding with disasters, helping the homeless and poor, and writing about her life and the Red Cross. She was also an ardent supporter of women’s suffrage. In 1904, she established the National First Aid Association of America, an organization that emphasized emergency preparedness and developed first aid kits. Her Glen Echo, Maryland home became a National Historic Site in 1975, the first dedicated to the achievements of a woman.