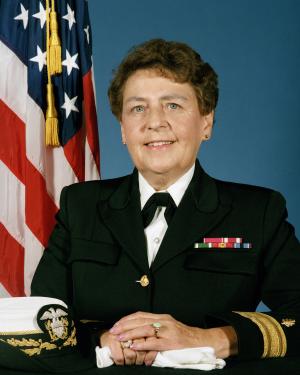 Mary Joan Nielubowicz was the only woman in the Navy Nurse Corps to earn the rank of Commodore and the first non-physician to earn the role of Deputy Commander for Health Care Operations in 1984. Nielubowicz was a Polish and Lithuanian American who rose through the ranks of the Navy to eventually earn the rank of rear admiral and the title of Director of the Navy Nurse Corps in 1983. She served in the Navy for 36 years in various roles while fighting to increase the number of women in the military and for an improvement in their experiences.

Adm. Nielubowicz was born in Shenandoah, Pennsylvania in 1929 to Joseph and Ursula Nielubowicz. Her father was a coal miner and her mother was a seamstress. As a Roman Catholic, she attended Catholic school for 12 years with her two younger sisters, Helene and Joanna. After she graduated high school in 1947, she worked as a pantry assistant and at a hardware store. She wanted to be a nurse since she was a young child and began her career when she enrolled in a nursing program in Philadelphia at Misericordia Hospital (now called Mercy Hospital).

After completing the nursing program in 1950, Adm. Nielubowicz worked in the labor and delivery ward of Misericordia Hospital. Encouraged by her staff physician, she enlisted in the Navy in 1951. Her initial roles in the Navy had her stationed around the U.S. and Caribbean, including: Virginia, California, Maryland, Cuba, and Pennsylvania. While in Cuba, she served as a lieutenant charge nurse, a high-ranking nurse role that involves being a supervisor, at Guantanamo Bay. The Navy provided opportunities for her to continue her education. She earned her Bachelor of Science degree from the University of Colorado in 1961 and her Master’s in Nursing with a focus on administration and management from the University of Pennsylvania in 1965.

Adm. Nielubowicz was still in the early stages of her Naval career when the war in Vietnam began. To assist in the war, she became a recruiter and then became a senior nurse in Iwakuni, Japan in 1967 to support a hospital and the Marine Corps. She enjoyed buying souvenirs, specifically jewelry and artwork, while abroad for herself and her family. After she left Japan, she served as a chief nurse in hospitals in Cherry Hill, North Carolina, Guam, and Long Beach, California. In 1975, Adm. Nielubowicz assisted with Operation Babylift, in which thousands of orphaned babies and young children were evacuated from South Vietnam. She received a certificate of appreciation from the American Red Cross for her help in the operation.

By 1984, she had become the Deputy Commander for Health Care Operations as well as maintaining her role as the Director of the Navy Corps. As Deputy Commander, she oversaw 31 hospitals, 11 major medical clinics, and 174 branch clinics across the globe. She earned numerous awards throughout her career including two Legion of Merit awards. The Association of Military Surgeons in the United States created an essay award named in her honor. Her original two-year long enlistment ended after 36 years on October 1, 1987. While giving her retirement speech, she said, “What a country we live in, where else could a coal miner’s daughter excel to great heights?”

With retirement, Adm. Nielubowicz continued her involvement in championing women’s roles in the military. She acted as chairman of the Veterans Administration’s Committee for Women Veterans and took a role on the board of directors of the Women in Military Service for America Memorial Foundation. She, as well as other powerful women, worked together to create a memorial for female veterans. Her goal for the memorial was achieved in 1997 in Arlington, Virginia.

Adm. Nielubowicz died in March 2008. She was buried in Arlington National Cemetery in May 2008 with Military Funeral Honors, a Funeral Escort, and an 11 battery cannon salute. Her funeral was attended by many family members and friends who remembered her as down to earth, caring, and a pioneer for women in the Navy.